Why the failing British apprenticeship scheme must be transformed 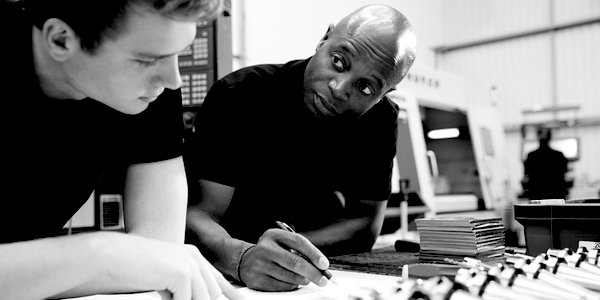 IT’S time to get back to work, says Prime Minister Johnson, and he is promising every young person the chance of an apprenticeship or a work placement, according to his speech at Dudley College in which he launched a ‘new deal’ which accelerates £5billion of expenditure on infrastructure projects across the country. He said that for a century, we have failed to invest enough in further education to give young people the practical training they need.

At the same time, Chancellor Rishi Sunak may give firms £3,000 for each apprentice they hire to help fight growing youth unemployment. This would be paid directly to employers for each new recruit under the age of 25, and involve handing over part of the cash when they take on a young worker and the remainder when the apprenticeship ends. It is hoped that small firms will lead the way.

All this comes not a moment too soon, at a time when Britain’s largest recruitment firm Reed predicts that post-coronavirus job losses will be the severest for thirty years, with unemployment rising to 15 per cent, which could amount to five million people out of work.

In several EU countries, most notably in Germany, apprenticeship schemes are successful routes into employment for young people. This also used to be the case in the UK, but since the Blair vision of 50 per cent of young people persuaded into going for a university degree, the conversion of technical colleges into new universities, and the free-movement-facilitated availability of ready-trained lower-paid workers, the apprenticeship scene in Britain has declined drastically.

As TCW has already reported, attempts by the government to get the process moving in the right direction haven’t worked. In 2017, under the guidance of Anne Milton, the government introduced a new strategy to kick-start the apprenticeship sector for the 21st century. Their target was to sign up three million apprentices by 2020, and included an Apprenticeship Levy to fund the scheme. The immediate effect was that apprenticeship starts fell by 61 per cent, with business leaders calling for the ‘apprenticeship tax’ to be scrapped as unworkable – too many financial disincentives and too much bureaucracy. More than 30 per cent of those who started apprenticeships failed to complete them.

One attempt to get the system going has been a start-up venture run by Tony Blair’s son Euan. After five years at Morgan Stanley, he set up White Hat in 2016 to encourage school leavers to take up apprenticeships. Its stated mission was to ‘find ambitious school-leavers who want to get training for good careers, but don’t want to spend the time and money it takes to go through college. White Hat gives them one-to-one coaching to match them with suitable employers, then part-time tuition for qualifications when they are hired. These aren’t the boiler suit jobs in engineering or construction you’d traditionally associate with apprenticeships, but modern white-collar roles – digital marketing, software engineering, business administration.’

Their system works by handling the financial, bureaucratic and training elements on behalf of participating companies, for a fee. According to their website, this levy is set at 0.5 per cent of an employer’s annual wages bill, collected through PAYE by HMRC, and the funding is made available to employers via a digital account. If an employer does not spend their entire levy amount on apprentices, the unspent portion can be made available to other employers. Funds in the digital account can be used only towards the cost of apprenticeship training and spent with ‘an approved apprenticeship trainer’.

White Hat’s ‘values’ are couched in right-on woke vocabulary. Their commitment to diversity, for example, states ‘Diversity boosts productivity’, ‘The trick to really nailing your diversity goals, is to lead from the top down, and from the bottom up. That means not only hiring diverse boards but simultaneously creating a solid apprenticeship programme to bring in diverse candidates from the bottom too’ and so on, and it has managed to tick most of the boxes in the apprenticeship-lite minority groups.

White Hat claim to have placed 550 apprentices since 2016, thanks to the efforts of their 43 members of staff. By 2023, they are targeting at least 10,000. They charge £1,500 for each hire, then get paid to provide training through the Apprenticeship Levy, described in the Evening Standard article as a ‘pot of cash that big companies have to fund by law’, thus highlighting the main problem with the levy-based scheme: it is not voluntary, in respect of larger firms. (This makes it similar to the television licence – a compulsory tax payable whether or not the payer watches any BBC TV on penalty of imprisonment.)

White Hat was exceptionally well positioned to key into the levy scheme, and secured an initial £3million funding. By 2019 it had secured a further $16million (£13million) in Series A financing in a round led by Index Ventures with participation from Lightspeed Ventures Partners and Sales Force Ventures, and it has all the elements of a sure-fire winner: celebrity identity, signed up to diversity and minority development, targeting employment in high tech and digital sectors, and a magic formula which takes the hassle out of the apprenticeship tax in exchange for a cut of the funding. A conduit, in other words, for the compulsory extraction of company funds into the coffers of a private company run by former merchant bankers.

White Hat has not yet indicated whether it is on target to reach its 10,000 goal for 2023, but it appears that the government’s clumsy and bureaucratic model still fails to inspire the apprenticeship concept. According to figures obtained by the BBC, employers are failing to use hundreds of millions of pounds intended for the training of apprentices. In total around 5,000 English employers relinquished more than £400million of funding raised by the Apprenticeship Levy in the first eight-month period. This suggests that some large companies are happier treating the levy simply as additional taxation and abandoning the funds, rather than taking advantage of it to improve the skills of younger workers. Matthew Fell, the CBI’s chief UK policy director, has stated that the system is clearly in need of urgent reform, and that the upcoming budget should be used to announce a comprehensive review into the levy.

In an editorial, the Sun claims that Britain has never taken apprenticeships seriously. This would certainly appear to be the case immediately prior to the Milton scheme, and the Sun goes on to claim it has proved to be a double whammy for the country. It says: ‘For years, universities offering third rate courses have shamelessly swindled young people who have few other options. And without proper training, Brits haven’t had the skills to fill vital jobs.’

TCW has looked in detail at how other countries implement their apprenticeship schemes, in particular the enlightened approach of the Swiss.

It’s called the VET, or vocational and educational training, a qualification which contributes to the low rate of youth unemployment in Switzerland of around 4 per cent. At the end of the school year, every pupil from the non-academic secondary sector is found an apprenticeship place in the local economy – construction, retail, healthcare, tourism, administration, banks, even Swiss railways. They are paid the Lehrling (apprentice) rate by their employer. At the end of the year, the local newspaper devotes several pages to photographs and congratulations for all the Lehrlinge who have qualified for their VET and are moving into full-time employment. The whole community is proud of them and they are celebrated. Their employers also get credit. This Swiss model is part of a complex overall picture – including social dialogue, a learning culture, and the federal system of government, concentrating decision-making at local level. It’s built into the Swiss way of life, and it’s a long-term process.

To work effectively, the relationship has to involve a committed and hands-on employer and a willing and determined novice. The process is two-way, between the employer/trainer and the apprentice/learner, and avoids bureaucratic interference from national government, complicated funding formulae, and delegation to third-party service providers. It’s a system that the UK government would do well to study in some depth, and could form a serious element in the Prime Minister’s ‘opportunity guarantee’. Johnson and Sunak could now push ahead with the plan to hand over £3,000 cash, but only to employers who seriously take on apprentices for long-term training. It would be expensive, but carried out with determination and entrepreneurial dynamism, it could re-invigorate the economy, and ensure that taxpayers’ money is better spent than in handing out a great deal more as unemployment benefits to young people able and eager to work.