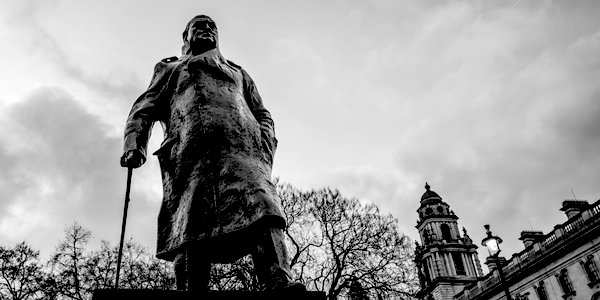 THIS week, co-ordinated attacks were made on four of London’s most prominent war memorials. ‘Allies’, a bronze sculpture of Churchill and Roosevelt in Bond Street, the Bomber Command Memorial and the Canada Memorial, both in Green Park, and the Graspan Royal Marines Memorial on The Mall were shamefully spattered with white paint.

So was the memorial to Yvonne Fletcher, the police officer who was murdered by a gunman during the 1984 Libyan Embassy siege, in St James’s Square.

Monuments matter. They serve as a constant reminder of the price paid for our freedom; a price so easily taken for granted. Defacing these inviolable memorials, even whitewashing the names of the servicemen themselves, is as good as digging up the graves and spitting in their faces.

Contemptible as they are, it would be quite wrong to assume the attacks have met with universal condemnation. While the phrase ‘hostile environment’ has been noticeably cheapened by a point-scoring Labour opposition, it is certainly true that a genuine anti-British sentiment has been allowed to fester upon our shores.

It seeps silently through sections of our media, the corridors of Westminster, and to the heart of academia itself. Columnist Yasmin Alibhai-Brown repays her debt to Britain by her continual, bilious attacks. David Lammy is content to blame everything but the weather on colonialism. ‘Black Studies’ professor Kehinde Andrews openly labels war heroes ‘criminals’.

Something is seriously wrong. When every aspect of our society is teaching the next generation to hate itself and its ancestors, what chance do they have? How have we got to the stage when our greatest generation is more likely to be remembered for its ‘toxic masculinity’ than its heroism?

And if it’s heroism you’re after, I fear millennials are not going to cut the mustard. Rather than seeking out greatness themselves, they seem content to destroy the past – a past which doesn’t meet their acceptable levels of ‘wokeness’.

Everywhere you look, statues are being toppled. Our greatest figures are condemned as racist and even cinematic depictions are criticised for their lack of inclusivity. Remind me, exactly how many transgender vegans were there at Dunkirk?

I’d love to see millennials genuinely replace the fallen. Outside their safe spaces, storming the beaches with their #MeToo feminism, pussy hats and soy lattes unsheathed – the Hun wouldn’t have stood a chance.

Soft-touch UK needs to get serious, because this desecration is not a mere misdemeanour. In the past, drink-sodden students have narrowly avoided jail for urinating on war memorials, while repeat offenders  have found themselves residing (albeit briefly) at Her Majesty’s Pleasure. But this latest outrage is not a case of drunken high jinks. This is something much worse.

We must resist the temptation to write this off as ‘mindless vandalism’, as the last surviving Dambuster, George Johnson, deemed it. An organised, systematic whitewashing of our fallen is an attack on Britain itself, which I believe historically would have been classed as treason.

For this reason, it was disappointing to see the Metropolitan Police initially refuse to release CCTV footage of the incidents. This should have been done firstly as a matter of consistency, secondly to avoid any understandable conclusions being leapt to, and thirdly to assist the public, in whose minds it would have still been fresh.

Khan’s London has a CCTV camera for every blood-soaked inch – you don’t want to miss out on that selfie while you’re getting stabbed, do you? The evidence therefore must be overwhelming. Post it, use it, and catch them.

As we sit idly by, evidence of the past is slipping through our fingers; the Few become fewer. Last month saw the passing of one of the last Battle of Britain veterans, 97-year-old Flight Lieutenant William ‘Bob’ Hughes, who joined the RAF Volunteer Reserves at just 18 in 1939. Who is going to take his place? What great obituaries will be written about the current generation?

What will we be celebrating 50 years from now? Olympic Gold for the most oppressed social justice warrior? The first ISIS MP? Gender transitions in utero?

We must not stand back and allow the magnificent valour of our forefathers to be glossed over, in any sense of the word. Thus far, the insult is twofold: the contemptible action itself, and the rather limp-wristed response from the authorities. This is about more than just the vandals – this is a litmus test for where we are as a nation; this is about us.

Wherever anti-British sentiment resides, it has no place in our society. It should be met with extreme censure, and where appropriate be shown the door. Though the British people are increasingly divided, they are still the nation that withstood the Blitz. I don’t think they are going to take this lying down. As former marine James Glancy observed: ‘I hope the police find you before the Royal Marines do.’