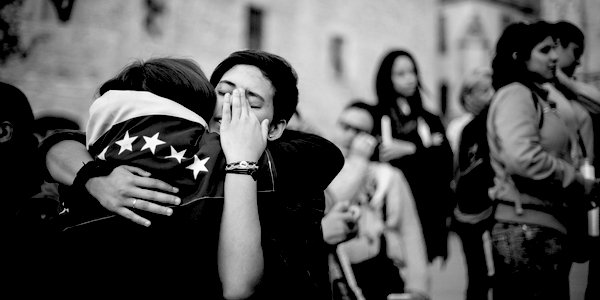 IF YOU want a demonstration of the power of socialism, look at Venezuela. A once thriving country, with the biggest proven oil reserves in the world, now in a state of pitiful collapse as shown by BBC2’s documentary Revolution in Ruins: The Hugo Chavez Story.

In 1970, Venezuela had a per capita GDP greater than Spain’s. Now it is a country of starvation where desperate people pick through rubbish for food. Last year, Venezuelans lost an average 24lb of body weight. Corruption and crime are endemic. The murder rate is 56 times higher than Britain’s. Many medicines are unavailable; public services have collapsed. Of a population of 30million-plus, more than 3million are believed to have fled abroad.

The popularity that President Hugo Chavez enjoyed until his death in 2013, when he was succeeded by his even less appealing but equally radical colleague Nicolas Maduro, stemmed from throwing vast amounts of money into welfare programmes and public services. Whatever the public wanted could be afforded. Chavez had found the mythical money tree. But he didn’t just satisfy the nation’s material needs, he was also entertainer in chief: a clown prancing for the cameras. Big cigars, gaudy tracksuits and a TV show where supplicants could ring in and have Mr President sort out their problems. It might be tasteless, but the comparison to Jimmy Savile’s glory days on Jim’ll Fix It before his posthumous disgrace seems almost unavoidable.

The regime had the ostentatious displays that dictators love. Ruritanian military uniforms, scarlet berets for supporters, clenched-fist salutes, marches, rallies and boastful sloganeering. Bread and circuses for the modern era. This sort of nonsense was very attractive to many Leftists outside the country. Here was a regime which used the rhetoric of revolution, expropriated the capitalists and stood up to America.

Never mind that revolution meant the use of brutality to silence critics and licensed violence against opponents, that expropriating the capitalists led to chronic economic mismanagement and a crisis in investment, or that opposing American ‘imperialism’ meant chumming up with monsters such as Saddam Hussein or Muammar Gaddafi. Of course Libya’s imperialism in Chad or Iraq’s in Kuwait could be ignored – neither Saddam nor Gaddafi were Yankees so they didn’t count. Here was a real socialist government, with real power, indifferent to criticism, led by a man who was happy to call George W Bush a donkey. How could our own Leftists not fall in love with Chavez?

It might be slightly indecent to use Venezuela’s misery to make points against Jeremy Corbyn and John McDonnell’s brand of socialism. It would be foolish, though, to ignore the warnings Venezuela gives us. It’s unlikely a one-term Corbyn government would reduce us to such destitution, however hard they might try. But Corbyn and other Labour figures have been proud to celebrate Chavez and Maduro. The film had some wonderful shots of a grinning Ken Livingstone and a fawning Jeremy Corbyn in the presence of the great leader during Chavez’s visit to the UK. I wonder what their adoration of Chavez tells us about their levels of economic literacy and respect for basic freedoms?

Whatever the failures of the Chavez ‘revolution’, and its increasing levels of authoritarianism, nothing could take the shine off for many on the Left. As Paul Horgan has already described in The Conservative Woman, there are those who will always defend ‘socialism,’ however dire its effects.

Chavez believed he had found the short cut to boost the living standards of the poor, his natural constituency. This may have been a laudable aim, but as the documentary showed, such short cuts don’t exist. Economic progress is always hard won.

Chavez thought that oil money would pay for everything, and as a bonus the state could seize whatever profitable companies caught his eye. Steel, banking, electricity generation and much else were brought under the control of the state, which would run businesses better than they could run themselves. If things didn’t go to plan, the state could direct resources or regulate prices to ensure the poor were protected.

Needless to say, the more the government interfered with the workings of the free economy and the more the opposition and media lost its power to challenge government excess, the worse the economic situation became. Not something that should surprise anyone who’s not a convinced Marxist, or who has a rudimentary knowledge of history and/or of how economies actually work.

Sadly though unsurprisingly, our Labour Party doesn’t seem to want to acknowledge the failure of Venezuela’s great socialist experiment. Only last June, the Corbynite MP Chris Williamson was happy to speak at an event organised by the Venezuela Solidarity Campaign, which supports the government of the country. Diane Abbott has been happy to employ Matt Willgress, the national co-ordinator of the VSC. Others in Labour share the enthusiasm.

Still available on the BBC’s iPlayer, the film was a powerful well-made introduction to the subject, even if it didn’t clearly make the links or note the similarities between some on our own Left and Chavez’s and Maduro’s United Socialist Party of Venezuela. Of course it seems far-fetched to compare Corbyn and McDonnell to Chavez and Maduro – but you can often tell a lot about someone by whom they admire.

According to Corbyn, as quoted on the programme, Chavez was a real example of socialism and there seems to be no intention to acknowledge the disaster, let alone of apologising. To Corbyn, Chavez ‘showed us there is a different way of doing things’. If we followed his example we would ‘march on to a better, just and peaceful world’. A lovely quote to comfort those Venezuelans who will be picking their dinners out of dustbins tonight.