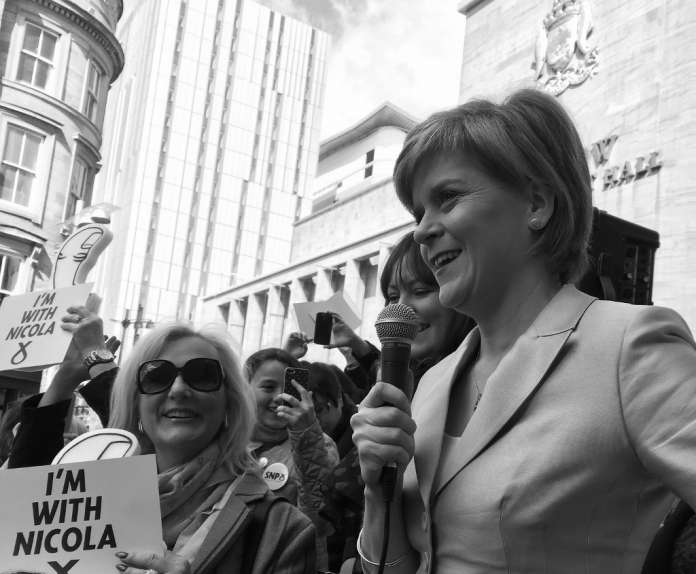 Yesterday, the press pack outside the Scottish First Minister’s Edinburgh residence, as she announced she was asking the Prime Minister to give the go-ahead for a second independence referendum , was actually meagre. This will have disappointed the ruling SNP, which often appears more like an extended media machine, or propaganda outfit, than a conventional party.

Scotland’s parliament is a mile away in the Holyrood district but it might as well be renamed Holywood. Since entering government in 2007, the SNP has behaved as if Scotland is little more than a cheap Holywood stage set where the same B-movie is being endlessly re-filmed.

The SNP has an obsession with narrative, image and optics like perhaps no other party in the Western world. It is obsessed with creating psychodramas that will persuade enough restive Scots that England is their adversary, preventing the march of a nation towards a glowing separate future.

Back on terrestrial heather and concrete, there are real and mounting problems with health, education and policing that Nicola Sturgeon has promised to fix but shrinks from tackling. She may well fear that she is losing her hold over a country that she and her predecessor fired up in 2014, when David Cameron unwisely granted the SNP a referendum on terms very much favourable to the nationalists.

A growing number of Scots are speaking up to insist that ‘the party of Scotland’ fix a backlog of problems that are impairing the quality of life in Scotland. The country now has one of the most powerful devolved assemblies in the world. But the SNP is absorbed in stoking up a non-stop melodrama around imaginary grievances. Fiscal transfers make up for the collapse in tax revenue from North Sea oil. They ensure high spending levels on often poorly run public services.

Sturgeon forgets that the SNP had campaigned in 2014 on the independence referendum being ‘a once in a generation opportunity’. When the pro-Union ‘No’ side won a bigger percentage victory than Labour had enjoyed in the ‘landslide’ of 1945, the emphasis remained on finding any pretext for painting the rest of Britain as ‘the other’.

Already in 2014 it was clear that a referendum on Britain’s membership of the European Union was likely. All it would take for it to be triggered was a Conservative victory in 2015 against two unpopular challengers. Polls already indicated in 2014 that if it was held, the pro-withdrawal side stood a good chance of victory.

But the SNP now contends that because of Brexit the material circumstances of the Union have profoundly changed. The Union is no longer what it was even though the 2016 EU referendum was an all-British vote with no specific Scottish, Ulster, London or Welsh dimension. Sturgeon contends that she was left with no alternative but to throw down the gauntlet by Prime Minister May refusing to accept her compromise proposals. This involved a differential or ‘bespoke’ solution in which Scotland remained a semi-detached part of the UK but at the same time part of the EU single market.

Scotland sells £49.8 billion worth of goods and services to the UK, compared with £12.3 billion to the EU.

During the lengthy EU referendum campaign, the SNP had not actively campaigned for Remain. Indeed, it had spent less in the EU campaign than in a previous Westminster by-election. Of course, the SNP insists that it is ardently pro-EU. But it has no strong views on what the nature of the entity should be as anyone who has attended boiler-plate debates on Europe at Holyrood soon discovers. The EU’s sole purpose is to act as a prop for the nationalists  to differentiate Scotland from the rest of the UK. The SNP is untroubled that control of borders, agriculture, fishing, etc would be retained by Brussels once full sovereignty was restored to the rest of Britain.

After 23 June there was no dramatic leap in favour of independence even though Scots voted 62-38 to remain in the UK on a turnout lower than in the rest of the country. Certain Scots professions feel strongly attached to the EU, particularly in academia and the media. A recent YouGov survey showed the number of Scots identifying as either British or some combination of British and Scottish at 67 per cent.

Moreover, fewer than 15 per cent of voters in 2014 considered EU membership to be an important factor in making their referendum decision.

In the face of misgivings within her own party, Sturgeon is gambling on rebalancing Scottish politics around the European issue. She is pressing the Scottish electorate to choose between two different unions. Her desired referendum date (between September 2018 and March 2019) means Scots would be unclear about what would be the terms on which a post-Brexit Britain would exist. It can be guaranteed that Scots would also be firmly on the dark about what would be the terms on which Scotland would belong to the EU; the currency it used; the amount it paid into EU coffers; etc.

What is clear is that the EU is moving in an increasingly centralised direction in which national parliaments head towards being consultative assemblies in which issues of tax and spend gradually slip from their control.

A loud lamentation is heard about an issue that is not central to the identity of most Scots and that (on her own side) really animates core SNP backers, groupies depending on state patronage, the party’s media arm, celebrities, actors as well as  professional Anglophobes, all of whom revolve in the Sturgeon orbit.

Local elections in May will show the extent to which Sturgeon is capable of persuading Scots to shelve their unhappiness at government incompetence in running their affairs. Her personal popularity has slumped as Ruth Davidson, leader of the Scottish Conservatives has been Scotland’s most popular figure for the best part of a year. Most prominent Scottish Tories were pro-Remain in 2016 but (with no exception I am aware of) they have all closed ranks to resist an early referendum and insist the SNP commit to doing the day job rather than eternal campaigning.

Sturgeon must energise the SNP base which does not share the enthusiasm of the still influential Salmond for an early referendum where the chances of success look uncertain. Perhaps she feels that as the SNP enters its second decade of rule, then the party’s lack of appetite for governing well will make it even harder to win a referendum after the details of Brexit have been worked out – so the sooner the better, otherwise too many Scots will tire completely of the SNP.

It would, however, be folly to assume that events may not move in her favour. What happens in European politics is crucial.  Right now she is  busy forging alliances with Socialist and Green politicians in Western Europe, especially Germany. If Macron and Schulz are in charge of France and Germany by the autumn, then I would not rule out a bid to sabotage Brexit or disable Britain by sponsoring a Scottish breakaway. It still looking a long shot but it might grow more likely if the ardent pro-EU leader of the opposition Michael Martin takes over in Dublin and presses for a united Ireland.

The SNP is also busy wining and dining influential academics in North America and Europe as well assorted VIPs from diplomacy in the hope that  they will prove a pro-Indy pressure group globally. The British government is making no such preparations or so it would seem. The Spectator, the supposed voice of English conservative thought, publishes article after article by Alex Massie which effectively imply the Union is on skid row.

Think tanks like Policy Exchange and the Bow Group steadily ignore Scotland. It encourages the rash view among a still small minority of English Conservatives that Scotland is expendable and a time of contentment surely beckons if it is placed permanently beyond the borders of Britain.

Sturgeon is facing growing high-quality Unionist opposition in Scotland. It will be difficult to rally the housing schemes of Scottish cities on a Europhile programme that many can figure out means hard times for them. She  is relying on friends in Europe, as well as blunders in the Unionist camp on a much bigger scale than in 2014, to enable her to pull off the dissolution of the UK.

A vote for separation  seems unlikely, considering people in Scotland receive £1,500 more public expenditure per head of population than those in England, Wales or Northern Ireland and the country has a huge £10 billion deficit.

But so, a short time ago, did Brexit, the election of Donald Trump, and Erdogan emerging as a huge European menace. Never, not even during the era of regular IRA bombings, have separatists committed to breaking up the UK actually been so formidable. The longer London fails to grasp this fact, the more likely a Scottish earthquake could match Brexit in magnitude.