The toppling of Theresa: Day 45 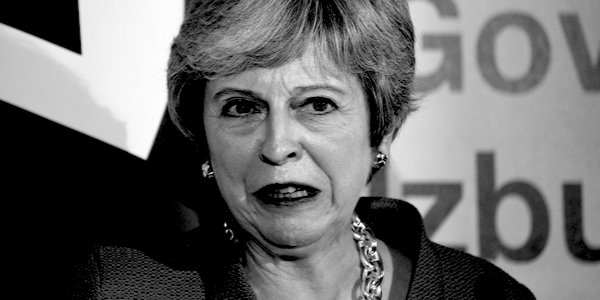 THERE is an almost pathological single-mindedness about Mrs May that has been consistently underestimated by the mainstream media. As it was again these last few days, and as I predicted.

Instead of being mortified into resignation by her summons to the 1922 Committee to be asked, yet again, for a date for her departure, or humiliated by the debacle of her EU election launch – as any normal individual would be – an undeterred Mrs May has not deviated from her main aim of forcing her BRINO ‘deal’ through Parliament, using whatever dishonest means it takes, by 31 July.

Since Number Ten can’t get their preferred deal with the Labour Party (at least openly) they plan to use a Remainer Parliament to achieve the same thing – neither party is then answerable to its members for what it wants but its members don’t – which is an ever-more diluted BRINO keeping us tied to the EU, and not being accused of splitting their party. Given such cynicism, it is no wonder they have never been more despised by the public.

We know this because their detailed plan was leaked to ITV, and Robert Peston reported it with his commentary on Friday morning:

‘Strikingly it shows Theresa May and her cabinet trying to achieve two other things: they want to use so-called indicative votes by MPs in just the next few days to prove MPs do not want a confirmatory referendum, and that they do want to leave the EU on 31 July.

‘If Jeremy Corbyn were to agree to this, he would split the Labour Party. But there are other elements of the proposed cross-party compromise, namely on customs and a proposed “package agreed with Labour”, which would tear the Tory Party apart.

‘The document shows the government wants to hold these indicative votes next week [Ed: ie this week], before the EU parliamentary elections and the short recess.

‘“We would make an emergency business statement on Monday; votes would take place on Wednesday”, the paper says.

‘It adds: “Whilst neither the Government nor the Opposition can commit to be bound by all of these votes, the purpose of holding them is to test the will of the House and, as far as possible, reflect that in the WAB to maximise the chances of it securing Royal Assent. To that end, the Government and the Opposition will consider not just the result of each vote but the level of support for it’.

In other words, Peston says, the cabinet wants to bind Labour’s leadership into a rolling process of assessing what compromises are necessary to secure passage of its Brexit legislation. MPs would be ‘able to vote for as many [customs] options as they want and the option with the fewest votes [would be] eliminated in each round’.

This vote on customs would be a free vote. It will, Peston predicts, be seen as an attempt to enlist the support of Labour MPs for a customs union or customs arrangements with the EU albeit loathed by many Tory MPs who would see it as a travesty of a ‘true’ Brexit.

The paper reveals also that Number Ten wants both government and Labour to whip in favour of leaving the EU with a deal, and getting all relevant legislation passed by the time of the summer recess so the UK can be out of the EU on 31 July, and on a ‘package we’ve agreed with Labour’.

Anyone listening to the Week in Westminster discussion between Labour’s Caroline Flint and Tory Sam Gyimah yesterday would realise that this is all too possible. Ms Flint made clear her backing for the process, for a Withdrawal Agreement with customs union agreement and confirmatory vote amendments. Gyimah agreed. May’s meeting with the 1922 Committee had changed nothing, he said, and ‘where Caroline is absolutely right is where amendments to the Withdrawal Bill being the confirmatory vote or anything else could be the way this gets through. It could be government-supported amendments, opposition-supported amendments or brought by backbenchers . . . and if it gets through it is hard to see the party saying [to Mrs May], “Now you have got it through, go the next day”.’

The addition of a commitment to a confirmatory vote should crack it, he thinks. For Flint, it would be locks put into the Bill to tie any future PM to it that will win the votes.

I have little doubt that the government and Tory remainers will be quite happy to go along with both.

It’s high time the leadership contenders, along with the ERG and any other Brexiteers in the party, recognise that Mrs May still in situ in September is not just a horrible nightmare, but a horrible possibility.

They need to stop competing in mock leadership context and put all their efforts into exposing May and her plans, and topple her before the Withdrawal Agreement Bill is passed by Parliament. If they fail, they’ll be stuck with her till 2022.

At TCW we continue to count the days into nights and the nights into days that it will take them to get this and get serious about Theresa.