The toppling of Theresa: Day 26 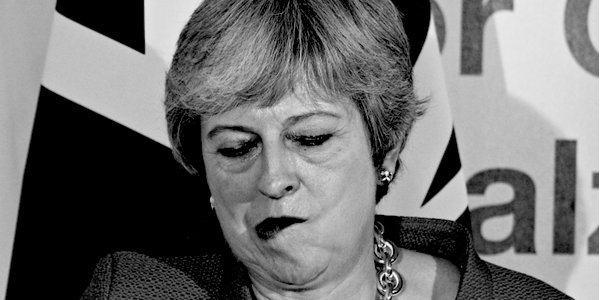 CHECKING the betting odds for Theresa May’s exit dates makes for interesting reading. They provide quite an insight into the public’s understanding of politics. I’d be set to make a tidy sum if I’d put money on the prediction that I’ve made many times since before last Christmas that Mrs May as PM will be leading the Tories into the 2022 election.

The odds on this, of Theresa still being our PM in 2022, are currently 25/1. I wish I’d kept a record of everyone who agreed to take me on. They must have already shortened every time our cling-on PM confounded the MSM and refused to go. And I suspect they will continue to shorten as the months go by to October 31, and the press reports that Mrs May is once again off to the EU on bended knee to request a third extension to our exit date.

This is the logical deduction to be made from Peter Foster’s latest Brexit Bulletin analysis the crux of which is that ‘the deal won’t change so British politics must’. Foster is the Telegraph’s EU-leaning Europe Editor and he sees things from the EU’s point of view which Brexiteers should never ignore on the principle of knowing your enemy. The bottom line is that since the EU has dictated the terms so far there is no reason to believe they will not continue to do. And this is what I suspect Mrs May is pinning her chances on:

Risk-averse Tory MPs won’t see a party leadership election as changing anything on Brexit other than making matters worse for them. Even a wipeout at the council elections on Thursday will not be enough for them to insist on May’s departure. She, meanwhile, will pass the blame for the Tories’ trouncing at the polling stations on those intransigent extremists in her party who blocked her from ‘delivering’ the Brexit she promised the country. Never mind that it was always a sham Brexit.

So they will let her stay and let her pay lip service to getting her deal through parliament as she refocuses her attention on what really motivates her – a state interventionist social justice agenda, with which Labour will find it hard to disagree.

As the new deadline of October 31 looms, back she will trot empty-handed to the EU for a new extension. Macron will again lose the argument and the UK’s extension, with the EU elections in the past, will be pushed to the summer of 2020.

Though this is, as Foster says, when ‘the UK really does face a hard deadline as the EU finalises its next seven-year budget cycle (MFF) and the new Commission grinds into gear’, the ‘waiting for Godot’ policy will have paid off. The Parliamentary Brexiteer rump will have become little more than a laughing stock – all mouth and trousers and old to boot. Yet the Remainer-dominated Parliamentary Party will mind little if the country then finds itself caught up in EU centralisation plans that can’t be escaped.

If experience is anything to go by, the waiting game will go on, allowing Mrs May to stay in office and MPs to draw their salaries for another three years – time enough at least to plan their post-parliamentary futures.

The only thing standing in the way of all the dosh I’d be due to collect in 2022, as I see it, is the defection of the 40-odd ‘trouble-making’ Brexiteer MPs to the Brexit Party. That would put a spanner in the works.

It’s about the only change to the political landscape that guarantees May’s demise. Ex-Tory Brexit Party MPs would have far more influence outside the Conservative Parliamentary Party than inside it. As the parliamentary wing of the Brexit Party (with their own leader) they could offer the confidence and supply agreement the Tories would need to keep them in power as a bargaining ploy. Their condition would be a) Mrs May’s immediate resignation and b) that the Party commit to no deal planning for October 31.

That or a General Election in which they would stand for Farage’s Party.

OK, granted it’s a high stakes poker game but it’s the only way I can now see to topple May and not to be waiting for Brexit for ever. I know readers will correct me if I am wrong.

We at TCW, however, are counting the days.