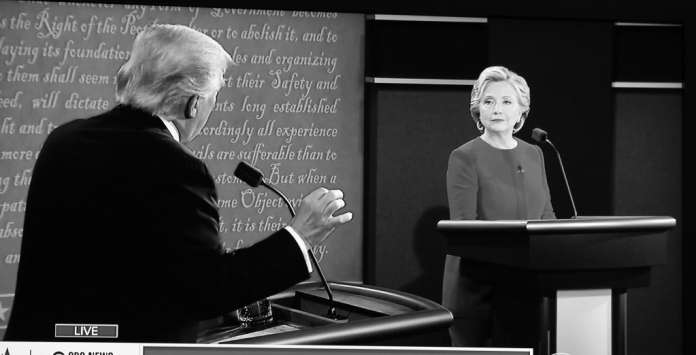 Thanks Peter as always for sharing your views with our readers, this time exclusively on the US election.

Laura Perrins: Donald Trump is obviously an odious chauvinist, does this make him unfit to be President?

Peter Hitchens: This isn’t a term I’d use. He’s an ill-mannered oaf, for sure. What’s really interesting is that he makes no secret of it and is happy for it to be known. This has been clear from the beginning, but has not prevented him being nominated. No doubt previous Presidents have been coarse and offensive in secret, and have despised women, but have concealed it. Yet it has not damaged him. I think the interesting thing about this election is not Mr Trump, but the willingness of so many voters to tolerate behaviour of this sort.

LP: My view is – on the question of character, Hillary Clinton was part of a cover up of her husband’s abuse of other women. So she is unfit also. Secondly, this is all a bit of a sideshow as none of us can vote. On election night, I will be asking myself which candidate will do the least amount of damage to British interests, and the least amount of damage to social conservatism? On both of those questions I think the answer is Trump. Am I wrong?

PH: Yes, you are wrong. You are not compelled to choose. It is time people understood that withholding votes from bad candidates is one of the great unused powers we possess. Both candidates should receive derisory votes so that even the winner lacks legitimacy, particularly the legitimacy to start wars of choice.

LP: Hillary Clinton is pretty trigger-happy when she speaks about Russia, Trump much less so. Is this the critical issue for you, and should it be for all of us?

PH: It is very important, but see above.

LP: Many social conservatives in the US believe the movement could survive four years of Hillary Clinton, but not four years of Trump. Do you agree? Does it really matter?

PH: Is there a socially conservative movement in the USA? I have not observed it. You have to exist before you can survive.

LP: Is this the kind of behaviour and conversation that went on in any of the locker rooms of your youth?

PH: I spent much of my youth avoiding locker rooms, teams and any activity involving lockers, so perhaps I am just untypical. But I was sometimes surprised by the casual sexual prejudices of the 1960s Left, and am even more struck by them when I compare them with the attitudes they claim to embrace now.

LP: The feminists would have us believe the respect men had for women 50 years ago was false and patronising. I happen to think you were all taught that when the ship went down you were to put the women and children on the lifeboats and that was that. Who is more deluded?

PH: Neither. Male courtesy to women was (and is) a good thing and so are the sort of changes in the legal, educational and social status of women that Virginia Woolf set out in ‘A Room of One’s Own’. The two can, and do, walk in step. But the much more radical programme of the anti-marriage radicals, who seem to prefer mass female wage-slavery to the married family, must obviously dispense with manners and customs of the sort you mention.

LP: This is really just a sign of serious cultural decay. It is all pretty depressing?

PH: Please don’t say’ depressing,’ a word which implies that the gloom of the sufferer is irrational and inexplicable. It isn’t. ‘Distressing’ or ‘dispiriting’ would be better. But anything is better than breezy optimism, a sure road to disappointed misery.