The ingredients for civil war 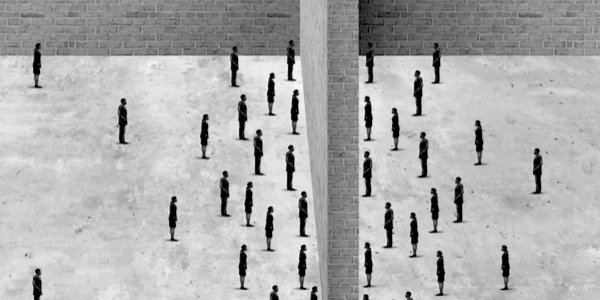 Donald Trump’s unexpected victory in the US Presidential Election and the Brexit win here in 2016 brought the social divisions of both countries to the fore.

James Bartholomew was quick to highlight the dangers of Britain’s new great divide. In a Spectator article after the EU referendum result, he showed how it had exposed a split Britain – geographically between city and country, and socio-economically between the haves and the have-nots; and one overarching divide: between the metropolitan elite and the rest.

Changes brought about by globalisation and large-scale immigration had affected different classes in contrasting ways.

A year later David Goodhart published his detailed analysis of Britain’s new tribal divisions, his ‘somewheres’ versus ‘anywheres’, in The Road to Somewhere. His additional insight was the growing culture and values divide between, for want of a better word, the nation-statists and the globalists, behind the fissure exposed by Brexit.

In the last few days two writers have returned to this divided society theme, one from the US and one from Britain, to explore the origins of these unaddressed rifts further and to warn of the folly of disregarding them.

In the National Review, Victor Davis Hanson lists what he believes, if left unresolved, to be the ingredients for a second US civil war. ‘Donald Trump’s election was not so much a catalyst for the divide as a manifestation and amplification of the existing schism’.

In the UK, writing for Quillette, the political scientist Matthew Goodwin expresses similar frustration with the losing but still in situ political establishment – their failure to address the causes of the UK’s popular revolt.

Instead, the dominant discourse of an establishment still reeling in shock and denial has been to delegitimise the result. The voters were too stupid, were duped by a crooked campaign or, worse, were racist and xenophobic and so on.

For it was, Goodwin points out, ‘the first occasion in Britain’s history when the culturally liberal middle class, which orbits London and the university towns, had lost’.

Selfish politics had seemed unassailable until this point:

‘the advocates of double liberalism – a globalised economy accompanied by a highly liberal immigration policy – had got all they had wanted’. Businesses, too, had ‘a continuing influx of mass cheap labour that not only fed a consumption-driven growth model that not only removed incentives for investing in training but also exacerbated divides between the high and low-skilled’.

Likewise in America, the picture Victor Hanson Davis paints shares these features and more – an entitled class benefitting from globalisation; the high-tech revolution in which mass-produced cheap consumer goods, assembled abroad, have redefined wealth ‘or, rather, disguised poverty’; along with higher education that’s brought record debt but neither the skill nor competence to justify it: a prescription, he says, for social volatility.

And immigration of course:

‘Immigration was recalibrated hand-in-glove by progressives who wanted a new demographic to vote for leftist politicians and by Chamber of Commerce conservatives who wished an unlimited pool of cheap unskilled labor. The result was waves of illegal, non-diverse immigrants who arrived at precisely the moment when the old melting pot was under cultural assault.’

Hanson is not the first to document the ‘coming apart’ of American society. Charles Murray’s book of that title published in 2012 described a growing divide that was primarily cultural. As with the UK, America was increasingly polarising into two culturally and geographically isolated demographics. With the unmarried and unemployed men the least adapted to cope with such change and competition.

Both countries’ establishments remain in denial as  the debate over Mexican illegal immigration there reveals and avoidance at all costs of an open debate about immigration here. Here, the focus of both political parties remains resolutely on ensuring a continuation of the status quo rather than on ‘how to remedy the problems that led so many to demand that it be radically changed’.

‘All revolts are symptoms of deeper currents and they cannot be ignored indefinitely’, Goodwin writes and he is right.

Both writers end by looking for resolution.

Here it needs  ‘radical reform of our political and economic settlement and an entirely new policy on immigration’. There’s been too much talk about trade deals, Goodwin says,  and too little about the wider imbalance within our economy; too much about London but too little about coastal, northern, or rural Britain where the Brexit vote was strongest.

Political realignment is also necessary to represent all segments of our society better. He is not alone.  Michael St George’s analysis of ‘the establishment elite versus the rest of us’ for TCW last Friday, suggests such realignment is inevitable.

What will bring us together again Davis asks of the US.

Bridging the divide, he believes, needs ‘a steady 3 to 4 per cent growth in annual GDP (which) would trim a lot of cultural rhetoric’, lowering unemployment to make more Americans valuable again, while ‘measured, meritocratic, diverse, and legal immigration would help to restore the melting pot’.

Reforming the universities is essential and a religious and spiritual reawakening vital:

‘The masters of the universe of Silicon Valley did not, as promised, bring us new-age tranquility, but rather only greater speed and intensity to do what we always do. Trolling, doxing, and phishing were just new versions of what Jesus warned about in the Sermon on the Mount. Spiritual transcendence is the timeless water of life; technology is simply the delivery pump. We confused the two.’

Americans also need ‘to develop a new racial sense that we are so intermarried and assimilated that cardboard racial cutouts are irrelevant’.

He ends with this warning: ‘Whether we all take a deep breath, and understand our present dangerous trajectory, will determine whether 2019 becomes 1861.’

It applies to the UK too. For unless our political elites end their disdain for the common man and refuse to acknowledge and address the issues that affect them, we too will be heading for our own civil wars.  If they are not already upon us.