TCW Encore: Professor Peterson and a rare outbreak of common sense at the Oxford Union 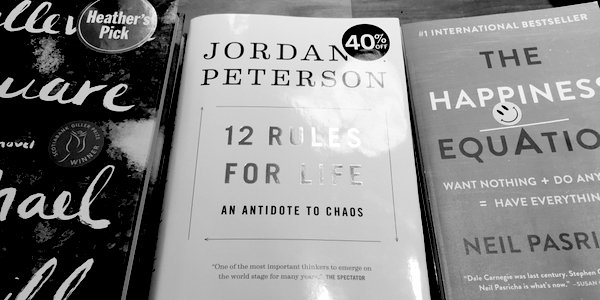 There is no getting away from the Peterson phenomenon. Over and above Brexit and the BBC, of the topics and people most likely to engage TCW readers’ interest, Jordan Peterson rides high.

Any critics who’d label us as incorrigible diehards should think again. The mission of this Canadian clinical psychologist and professor of psychology is to show the enduring relevance of hard-won truths (principles and morals) of ancient traditions with the stunning revelations of cutting-edge psychological research. He has appealed as much to the young as to the old, attacking the post-modernism, identity and gender politics they have been imbued with. With an unflappable calm and simple but devastating logic he’s left stroppy TV interviewers in his wake and students struck silent.

Earlier this year he took this revolution in thinking and behaviour one step further, publishing a latter-day Ten Commandments, except that his add up to twelve, and he calls them rules for life. He has been on a sell-out worldwide book tour with them since.

In May he came to the Oxford Union and Jane Kelly was there to report. Her mesmerising account made TCW’s fifth most read post of the year so far. It is next up in our Encore series and is not to be missed:

‘I feel like a heretic being here,’ said the third-year history student next to me in the Oxford Union. ‘University opinion is default Left. Most common rooms are dominated by extremists.’

We were waiting for Professor Jordan Peterson to arrive. He calls himself ‘the world’s only Right-wing psychologist,’ and everyone was expecting trouble; even though it’s finals week, nearly a thousand people had enquired about tickets on Facebook. Members only were admitted, there was strict security and any would-be protesters were warned they’d be forcibly removed. Inside, a lantern-jawed heavy stood against the door looking meaningful.

It was a surprise that Peterson had been invited to speak at all; since 2015 Oxford freshers have been obliged by the students’ union to take ‘race, equality and diversity’ workshops. They are also obliged to agree that only white people can be racist.

‘That sets the tone for the rest of their time here,’ my student neighbour told me. ‘There’s an agreed political ethos, what you can and can’t say, so you become self-censoring. Some people test the waters but it’s probably not worth it if you want to fit in.’

But strangely there was no sign of Antifa, the violent ‘anti-fascist’ mob or any transgender trolls as Peterson began.

‘Am I allowed to say things which make others uncomfortable?’ he asked. ‘If I do that am I guilty of hate speech? That was a jaw- dropping question and should never have been asked, at least not by a journalist.’

It was jaw-dropping that none of the 450 students made a murmur of protest. Peterson was referring to Cathy Newman and the Channel 4 News interview on January 16 which went viral. It took place after he’d published videos criticising the Canadian government’s Bill C-16, which made ‘misgendering,’ or challenging of men who identify as women, into ‘hate speech’.

TCW readers know how that encounter turned him from obscure Canadian professor into the great white hope of the beleaguered Right. There were YouTubers who said Ms Newman had a fancy for the man busy tearing her to shreds. He is strangely seductive; frail-looking in slick blue suit with tousled grey locks, his long, narrow brogues obviously freshly polished. He believes people are more useful to themselves and society if they look smart, stand up straight, and put their shoulders back. Looking around at the students, mostly clad in leisure wear, I was surprised that they responded only with enthusiastic laughter.

Although he almost disappeared into the large red chair provided, he couldn’t help looking patriarchal, folding his hands and peering over them, emanating a powerful aura which clearly said: ‘Relax. I’m in charge and I am right, about absolutely everything.’ His manner must be reassuring for his psychotherapy clients.

He’d clashed with Newman over equal pay and jobs for women. He’d demolished her hallowed argument that there is a huge structural injustice against women in the workplace by drawing evidence from biology and economics.

He told the students: ‘Men and women are different in temperament. They’re mostly the same but the differences are massive; men are more aggressive. More interested in things than people, so more often become engineers.’

In the UK only 11 per cent of engineers are female, in Canada it’s 13 per cent. The bitter quarrel is about why: the Left blame power structures and try to change them. London University has just dropped its A-level maths and physics requirement to try to get more girls into engineering. Oxford is replacing many exams with coursework which benefits girls. Peterson sees such actions as futile, attributing sex difference to biology and innate behaviour learned over millions of years. He uses the same kind of evidence to suggest that it’s wiser and more productive to hold cautious, conservative views.

‘Attempts at egalitarianism only make people more different,’ he said. No one in the hall demurred.

It’s a sacred belief on the Left that women, blacks and gays are repressed by social constructs which allow white men to have power over them. Peterson dismisses all that. In his best-selling book, 12 Rules For Life, he famously uses the example of lobsters, which share a common ancestor with humans and have a nervous system like ours, attuned to status which ‘runs on serotonin’, the chemical associated with well-being. He says hierarchy is good for us and makes us happy.

‘Life is essentially about suffering,’ he said. ‘We transcend that by pursuing things of value. To do that we create a hierarchy of co-operative people doing different tasks.’

He admitted that this can produce inequality. Liberals say our values are not worth the cost and replace ‘value’ with Marxism. Peterson says they also generate mini-hierarchies which result in tribalism, war and chaos.

Via Darwin, Tolstoy, Nietzsche, Freud, Jung and Heidegger, he returned to his biggest concern: political correctness and free speech. He believes, from the behaviour of chimpanzees, that tribalism is deeply in our natures; it can be overcome but is manifest now in identity politics which labels humans by gender, race and class. The war between these groups is the ‘post-modern reality’.

‘Who defines hate?’ he asked. ‘The ones we least want to define it.’ Against the warmongers of identity politics he posits ‘individual sovereignty’, with responsibility towards each other. He believes that is ‘the only way to create a peaceful, successful society’, and rather flatteringly praised the UK and American founding fathers (‘all good Englishmen’) for establishing individuality as a principle of state. ‘We lose this at our peril,’ he said, obviously feeling imperilled. ‘Universities are doing what they can to sacrifice the individual view in favour of the tribal. That is unforgivable and appalling.’

Last year research supported by the Joseph Rowntree Trust suggested university censorship had increased over the past three years, with a growing number actively clamping down on ideas, literature and speakers that are not in tune with their own values. Oxford students gained notoriety with their iconoclastic ‘Rhodes must fall’ campaign against dead white males they didn’t like.

The Oxford Union’s response to Peterson tells a different story, largely ignored by the press. The students were eager to hear him; all their questions concerned ethics rather than politics. They gave him warm applause and good humour; perhaps getting tired at last of the angry Left-wing rhetoric they’ve heard all their lives, or just too intelligent to buy it.

Despite being forced to attend workshops on race, identity and diversity, the ones I met this week are uninterested in extremist views. My student neighbour is conservative but found Oxford University’s Tory Association was mainly composed of old Etonians who all knew each other before they arrived. Unwilling to join them, he found himself part of the silent, hard-working majority.

On my way out of the ancient hall I heard two boys excitedly discussing Peterson’s use of philosophy and metaphysics. To my old ears his words had mostly sounded like plain common sense, something I don’t think they could remember or recognise. Listening to Peterson they seemed to think they’d just discovered it.