St John Paul II, an inspiration to the oppressed 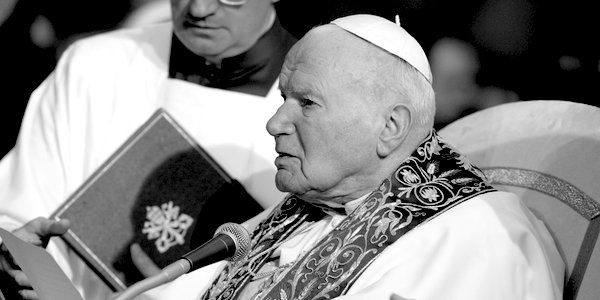 Today is the feast day of St John Paul II, Pope from 1978 to 2005. He is considered a hero amongst most Catholics, having steered the Church through a time of great upheaval and rapid change, both social and technological.

Born Karol Wojtyla, he grew up in Wadowice, Poland, and moved to Krakow. His mother died when he was eight, and by the age of 20 he had also lost his father and his older brother, to whom he was close. He said: ‘At 20, I had already lost all the people I loved.’

He also lived through the Nazi occupation of Poland, but despite this profound suffering he went on to become Pope and one of the most influential men of the 20th century.

What a witness this is to the indomitable human spirit, and the things you can achieve with God. His life is the perfect tonic to those in society who wish to define us by our difficulties, by our tragedies, who wish to tell us how oppressed and hard done by we are, how weak and passive and childlike.

This was a man who had every reason to see himself as a victim, and yet he embraced his suffering and rejected that perspective, and in the end it made him stronger.

St John Paul II was a prolific writer and upheld Catholic teaching in the face of heavy bombardment from many enemies, just as we have to do today. There was the atheist communism in the East, and the selfish, hedonistic materialism of the West, both of which deny the primacy of God.

The great saint had a particularly influential role in the fall of communism in Poland, and was the catalyst and inspiration behind the rise of the Solidarity movement. Whilst there is much to find repellent in today’s system of greed and individualism, no faithful Catholic can turn to communism as an alternative, for in communism God is replaced with the state.

The idea that Jesus would have been a socialist persists, but it is silly one. Marx, the founder of socialism and communism, considered religion one of the many tools of oppression in Western society – an ‘opium of the masses’ – and St John Paul II quite rightly saw the threat that communism posed.

Nowadays it is easy to feel politically homeless as a Catholic, and there are threats from both sides of the political spectrum. The obsession with profit margins above all else has meant that morality is an inconvenience to be dispensed with, and I don’t believe you can understand the sexualisation of society without the maxim ‘sex sells’.

The Left, on the other hand, wishes to degrade everything traditional about Western society, and things such as the family, community and traditional values are all annoyances that get in the way of whatever mad utopia they are currently trying to usher in.

St John Paul II is a great role model. He preached the gospel with a smile on his face, but didn’t dilute the message to make himself popular. He stood up to the USSR, and helped rid the world of one of its worst and most inhumane tyrannies.

He did all this despite a difficult start to life, showing us that our hardships don’t need to break us. We don’t need to obsess and ruminate on our woes, become bitter and angry, and if they are to define us, they define us because they have made us better – as they made him.