Rev Jules Gomes: The Devil enlists feminists and lust to make a workplace for wandering hands 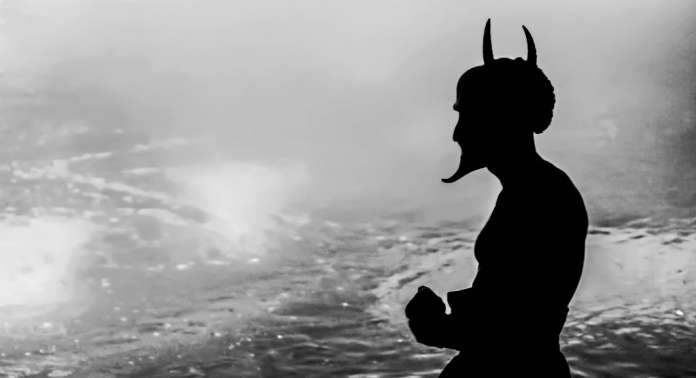 How good and pleasant it is to watch the feminists get their knickers in a twist. Forty years ago we celebrated with a fireworks and brimstone extravaganza when we got them to burn their bras. Now, our Master, who must not be named, has raised a hot glass of viscose, full-bodied, bubbly Lava and asked us to raise a toast to the success of your team as even Popeye the Sailor man cannot undo the knots in the knickers of our postmodern feminists.

Earlier this month, our Master nearly fell off his fiery throne shrieking with laughter while reading the special asbestos-coated fireproof edition of The Guardian. ‘Half of women in UK have been sexually harassed at work, study finds,’ the headline read. It was based on a study carried out by our comrades in the Trades Union Congress with whom we have enjoyed a special relationship for a very long time.

The study said that 52 per cent of women had experienced sexual harassment at work including groping, sexual advances and inappropriate jokes. Among women and girls aged 16-24, the proportion reporting sexual harassment rose to 63 per cent. Around one in eight women reported unwanted sexual touching of their breasts, buttocks or genitals or attempts to kiss them. One per cent said they had been raped or seriously sexually assaulted in their workplace.

This is all very good news. The battle of the sexes must continue. The bloodier, the better. But this is where our Master has entrusted you with a special mission. You must never, never, never, allow the foolish humans to believe that this has anything whosoever to do with what our Master believes is one of our greatest stealth weapons of recent times—the institutionalisation of lust in the West.

It did not take very long for us to embed the institutionalisation of lust into the workplace. Our Christmas parties are our crowning glory—it only takes a few vodkas and tequilas to turn the ladies into ladettes—and in the morning everyone is recovering from sexual amnesia not knowing who had sex with whom on the photocopying machine. Even our good friends at Marie Stopes International admit that there is a 13 per cent rise in post-Christmas abortions. It almost reminds you of King Herod slaughtering the innocent children during the time of Jesus, doesn’t it? What fun!

Now don’t get too swollen headed by your success. If word gets out that it’s all about lust our project will fail. We have been pushing the idea very hard that it’s all about power. Two of our greatest canonised saints—Friedrich Nietzsche and Michel Foucault—have drilled this so deep into the brains of postmodern Westerners that it would take a moral and philosophical genius to come up with an antidote to our ethical lobotomy. Sadly not many ordinary folk read such deep devotional literature penned by our greatest saints but we do employ diluters of their toxic brew to serve it in a more potable form to the masses. Read Suzanne Moore’s column on the TUC report and note how wonderfully she turned it into a campaign for the Labour party to promote women in its ranks! It is about power, writes our lovely Suzanne, completely ignoring the fact that much of the harassment is from co-workers. As long as they don’t mention lust (or greed or gluttony or any of the seven deadly sins for that matter) we are in business.

One of the cleverest tactics of our Master was to get women seduced by the sirens of the feministasi to willingly agree to submit to their own wretched sexual dehumanisation by getting them to jettison the entire culture of modesty that our Enemy had inculcated in the West through that terrible book called the Bible. Do you remember how we inspired Madonna, our high priestess, to produce a music video called Express Yourself? When Madonna was asked if she condoned the ‘degradation’ and ‘humiliation’ of women in the video by wearing a neck manacle and crawling on the floor do you know what she said? “But I chained myself! I’m in charge.” You do have in your iTunes other songs like the one from Maroon 5’s called Animals. I love it when Maroon 5 singer Adam Levine croons “Baby, I’m preying on you tonight. Hunt you down eat you alive.” A fine hymn written to glorify and normalise sexual harassment—our special fund will continue to support the composition and performance of this genre of hymnody.

Wormwood, my dear nephew, I have written to you of our saints and singers. Now brace yourself for some bad news. Our Chief Commissar who heads the Department for the Deconstruction of Western Civilisation has specifically asked me to alert you an Enemy Agent who must be silenced at all costs. Her name is Wendy Shalit. Thank Heavens, she is an American conservative. So far we have successfully managed to keep her readership in Europe confined to small numbers of Christians by flagging up her American and conservative credentials. Her first book A Return to Modesty: Discovering the Lost Virtue caused our Master to have an apoplectic fit.

She asks the question which must not be asked by these stupid humans.‘We are far from patriarchal rules as we could get. So if we were supposed to be living in non-sexist paradise, then why were many of us (women) this miserable?’ ‘As for the feminists, I want to invite them to consider whether the cause of all this unhappiness might be something other than patriarchy.’ Her book proposes this novel thesis: ‘I propose that the woes besetting the modern young woman—sexual harassment, stalking, rape—are all expressions of a society which has lost its respect for female modesty.’

This dreaded woman manages to achieve a remarkable depth of scholarly rigour in her book. ‘Respect for modesty made women powerful. When the creepy Mr Slope of Barchester Towers “contrived to pass his arm around [Eleanor’s] waist” when it was unwanted, he was stigmatised for the rest of the novel. This freedom from sexual harassment, so to speak, was the direct consequence of a society that valued female modesty,’ she writes. Wormwood, my boy, watch out for the fifteenth anniversary of the publication of this book for it is gaining considerable attention in some quarters.

Before I seal the envelope and lick the stamps let me share with you one final piece of good news. Remember the Memo issued to you for insubordination 40 years ago when you jeered at his suggestion that the Western project of radical feminism would make life worse for the fairer sex? In your teenage arrogance you argued that feminism would liberate women. I’m glad you now admit you were wrong. Our Master has let you off the hook! Now go forth and continue our good work among the feministasi.