Dr Campbell Campbell-Jack: Silly Sturgeon wants to quit a successful union and join a failed one 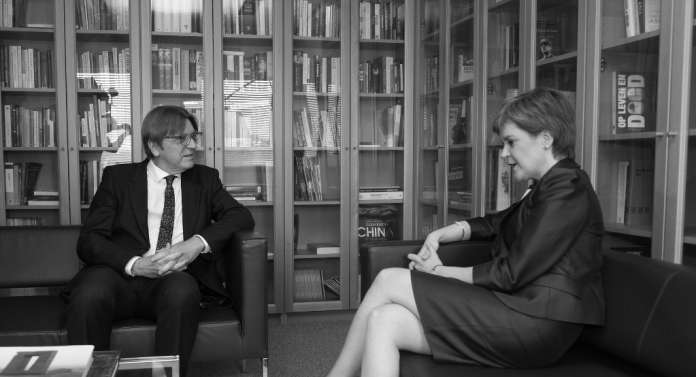 What sort of person would want to destroy what is probably the most successful political union ever in order to join a failing, inefficient, bureaucratic, sclerotic political union? Nicola Sturgeon and the SNP, of course. Make no mistake the desire of the SNP to remain by hook or by crook in the EU is driven by a desire to smash the UK.

For over 300 years the UK has proved of benefit to its members, especially the smaller nations. Together we have thrived culturally, economically and socially. The UK has been a world leader in just about every field imaginable, a hive of intellectual activity and invention, and a civilising force throughout the world. Yes the UK made mistakes, what great power hasn’t? But overall the existence of the UK has been a blessing to the world.

Today, with the UK’s international influence greatly reduced and our economy needing the revitalisation of freedom from the Brussels stranglehold which is holding us back, the SNP want to sow dissension. In Scotland’s Place in Europe published just before Christmas, Nicola Sturgeon sets out the SNP position. They want Scotland to remain in the single market which is, in effect, to remain in the EU whilst the rest of the UK leaves.

Pursuit of the SNP position of remaining in the single market will seriously affect the UK government’s negotiation powers with the EU. But as far as Sturgeon and her allies are concerned that is the icing on the cake.

Charles Grant, of the pro-EU Centre for European Reform and a member of the First Minister’s Standing Council on Europe, has said quite clearly that it was “extremely difficult” to see how Sturgeon’s plans were even plausible. “Legally, politically, technically, it’s extremely difficult for Scotland to stay in the single market if the UK as a whole does not, the basic point being that there would have to be one set of business regulations applying to England and another set applying to Scotland.

“So that would require the devolution of all business regulation matters to Scotland, which clearly isn’t going to be on the cards in the foreseeable future.”

Charles Grant is not alone in his opposition to the paper. He is the third member of the Sturgeon’s Brexit council to go public with his lack of faith in the SNP plans. Another of them, Lord Kerr of Kinlochard, the Scottish peer who wrote the Article 50 process, told the BBC Sturgeon’s proposals were not possible.

Sturgeon also knows that the other nations in the EU will not seriously consider her proposals, however much they may wish to punish the UK for Brexit. EU members would be concerned about the possibility of Scotland becoming a “back door” route for goods from the rest of the UK into the EU.

It is a delusion to think that the other nations will consider Scotland a ‘special case’. Belgium, Bulgaria, France, Czech Republic and Spain all have separatist movements of varying importance wanting independence. They are hardly going to exacerbate their own problems merely to please Scotland and make life difficult for the UK.

Sturgeon argues that Scotland could still retain free trade across the UK as well as the EU, although freedom of movement for EU nationals would only apply north of the border. Such an arrangement would be incredibly complex to enact and would inevitably mean border posts between Scotland and the rest of the UK, something which could not be tolerated for long.

Scotland remaining in the single market while the rest of the UK leaves is a fantasy, but one the SNP will pursue relentlessly. Ultimately, this paper is a tactical push for a second referendum. When these unrealistic proposals are rejected, Nicola Sturgeon will cry ‘Foul’ and demand that Scotland goes to the polls once again. As with the EU she intends to keep on having votes until she gets the ‘right’ result.

Even if Scotland were unfortunate enough to leave the UK, entrance into the EU would not be a simple matter. The EU would likely put Scotland’s entrance negotiations on hold while it sorted out the Brexit negotiations. Negotiations would take years, and they might not be as rosy as the SNP imagine. Like any country applying to join the club, Scotland would find that it had to accept the terms imposed on it by the other member states and EU institutions. For example, Scotland would have to accept the euro, a failing currency. Neither would Scotland get a share of the UK’s rebate on its contribution to the EU budget.

Blinded by their desire to gain independence from the UK, the SNP is prepared to consider any proposal, no matter how far-fetched, which will damage the Union and create a climate of opinion in Scotland that might lead to independence.

Share
Facebook
Twitter
Pinterest
WhatsApp
Previous articlePaul T Horgan: Working from home would derail the bully boys of the transport unions
Next articleJane Kelly: India has a space programme and nukes. Why do we give it aid?