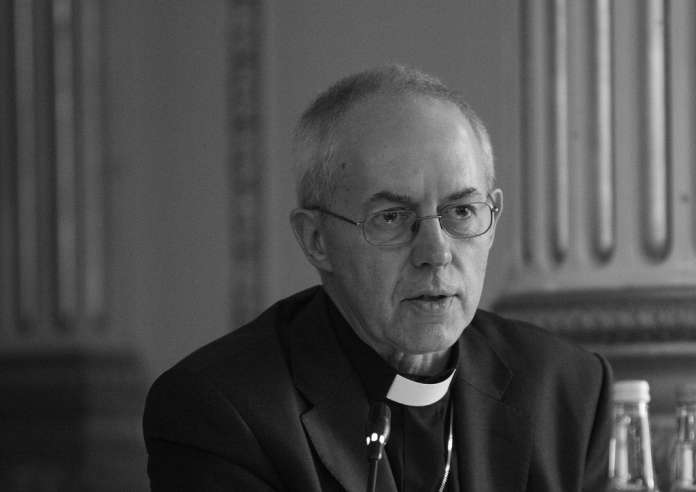 You boot a right-wing chaplain out,

You bring a left-wing chaplain in,

You shake it all about.

You do the Hokey Cokey, and you turn around,

That’s what the Church of England is all about.

We’ve seen the era of the Blair babes, and we’ve seen the epoch of Dave’s dolls. Now we’re witnessing a new age of Welby’s “wimmin” priests and bishops. While Buckingham Palace has just given the bum’s rush to a Queen’s Chaplain who adores the Lord Jesus Christ, Lambeth Palace has just welcomed an Archbishop’s Chaplain, who adores the ultra-radical French feminist Luce Irigaray.

As ordained women representing the church, they are not campaigning for the sanctity of marriage, the family, or the unborn child. They express no disquiet at the epidemic of teenage pregnancies, single mothers or children without fathers. They voice no revulsion against the practices of female genital mutilation, honour killings of women, burning of brides who have not brought sufficient dowry, disfiguring the faces of women with acid, the sex slaves of Isis, and the treatment of women in many parts of the Islamic world.

They are not happy that one of Mr Trump’s first executive orders has been to stop foreign funding that assists in the killing of the most vulnerable—babies in their mother’s wombs. No! They are not pro-life; they are anti-Trump. Donald Trump, not Isis, is their new enemy. Luce Irigaray, not Ayaan Hirsi Ali, is their new ally. Their profound theological and philosophical response to Trump’s locker room talk is to demonstrate solidarity with Sister Charlotte Church in London and Mother Superior Madonna in Washington.

Wallowing in their hyperbolic hormonal overdrive, senior ‘wimmin’ clergy from the Assistant Bishop of Liverpool Susan Goff to the Bishop of Gloucester Rachel Treweek have either attended or gushingly tweeted about these rallies that for some strange reason unknown to us men had something to do with “cats!”

Archdeacon Jennifer McKenzie from Liverpool Diocese flashes her tweet as if she’s witnessing the Second Coming: ‘Reports say there were 110K of us today in #womensmarchlondon! Amazing event!’ Bishop Susan Goff graces her Twitter feed with a picture of her Eminence ‘on the March in DC today.’ Paul Bayes, Bishop of Liverpool, ecstatically erupts on his Twitter feed with an affirmative, ‘To stand & be counted is a necessary first step for us all.’

What are they standing for? What are they witnessing? Lily Allen grabbing Piers Morgan’s crotch? The liberation of women like Ashley Judd, Gloria Steinem, and America Ferrera, who are suffering, oppressed, and marginalised? The display of rank vulgarity and inanity flowing like a gutter on posters that read ‘Roses are red/ Fascism ain’t new/ F**k Donald Trump/ and F**k Pence too’?

So where does Welby’s new chaplain fit into all this chorus of Sirens against whom Ulysses and his crew have to plug their ears? Archbishop Welby himself gives us an insight into how influential his chaplain might be: ‘The chaplain is a central part of life here, supporting the archbishop and the family, maintaining the rhythms of worship and prayer and providing pastoral support for the community who live and work here.’ ‘In addition to the usual duties of chaplain, Hamley will develop the archbishop’s priority of prayer and the renewal of religious life, especially through the Community of St Anselm, the residential ecumenical new monastic movement of prayer based at Lambeth Palace.’

So how is Ms Hamley going to get her inspiration for such a noble task while fixated on her doctoral thesis Relational Identity, Otherness and Victimisation: An Irigarayan Reading of Judges 19-21? Irigaray is not about worship, prayer or the renewal of religious life. While refusing to label herself a feminist, ‘Irigaray demonstrates that she is not satisfied with the liberal solution of equality to amend the prevailing situation. In her view, such a position can only grant women the status of token males,’ writes Morny Joy in her book Divine Love: Luce Irigaray, Women, Gender and Religion.

In Irigaray’s major writings Speculum and This Sex Which Is Not One, she launches ‘a sustained criticism of the unitary male perspective that she posits as dominating western philosophy and religion.’ She believes in the potentiality of women ‘to become divine.’ She is deep into Eastern religious practices like yoga and meditation. ‘In Irigaray’s view, this God-the-Father, particularly the god of Christianity, stands supported by religious philosophy and theology as the bulwark of a traditional system that demeans women,’ explains Morny Joy.

Does Welby’s chaplain share those same goals? If so, expect Wobbly Welby to be sucked even further into the quicksand of feminist gobbledegook. This week, in a bold interview with TCW, the former Queen’s Chaplain Dr Gavin Ashenden put his finger on the core of the problem with the Church of England. ‘The hierarchy of the C of E have become so politicised that it matters more now that you are a feminist than a theologian or a baptised Christian,’ he said.

We can expect I love Luce to be the new sitcom at Lambeth Palace for the next few years until the Ms Hamley is elevated to the episcopate and wears an anti-Trump designer mitre (or “pussy hat”).