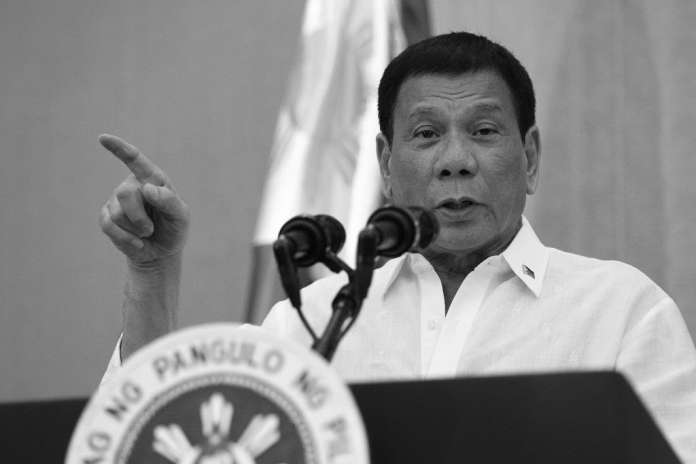 The Catholic Bishops Conference of the Philippines (CBCP) is staging an ethical coup against President Rodrigo Duterte. They have detonated a bomb aimed at Duterte’s policy of reinstating the death penalty. The bomb is the Bible. It is a bomb because its text without context is pretext and can be used to justify almost anything.

I’m no fan of Señor Duterte. His hobby isn’t collecting shoes à la Imelda Marcos. Duterte specialises in collecting the scalps of criminals—the legend of Duterte throwing a drug lord from a helicopter is a prize jewel from his scalp collection.

My stomach turns when I notice that he would like to add three million drug addicts to his scalp collection. ‘Hitler massacred three million Jews…there’s three million drug addicts. I’d be happy to slaughter them,’ he says. The rhetoric is revolting. But his people are cheering. My local Filipino “intelligence officer” on the Isle of Man (which has a sizeable Filipino community working at Noble’s Hospital) informs me that he and 90 per cent of his expat compatriots support Duterte’s Dirty Harry brand of justice.

Unlike the “we don’t do God” government of Phony Blair and Alastair Campbell, the Bible-thumping ‘basket of deplorables’ in the Philippines has roped in God. ‘God is for the death penalty,’ thunders Senator Manny Pacquiao. He fires a round of Bible verses. ‘In Genesis 9:6, “Whoever sheds human blood, by humans shall their blood be shed; for in the image of God, has God made mankind.”’ He refers to Exodus 21:12, “Whoever strikes a man so that he dies shall be put to death.” Pacquiao quotes Paul’s letter to the Romans 13:4, “For the one in authority is God’s servant for your good. But if you do wrong, be afraid, for rulers do not bear the sword for no reason. They are God’s servants, agents of wrath to bring punishment on the wrongdoer.”

On Ash Wednesday, the House of Representatives approved the death penalty for drug-related offences. The draft awaits Senate approval. But the liberal Catholic bishops are warning, ‘don’t misuse the Bible to push the death penalty.’ Why are they worried? The Catholic Church in the Philippines has been haemorrhaging hundreds of thousands of its members to evangelical churches.

President Duterte is gaining political mileage from this battle for the Bible. He has declared the January of every year as “National Bible Month.” Duterte also detests Catholic clergy. An American Jesuit priest fondled him while he was in high school. The school expelled Duterte when he squirted an ink gun at another priest’s white cassock.

I’m not too fussed by the psychology and the politics of the debate. I’m fascinated by the popular versus clerical interpretation of biblical texts in a socio-ethical debate. On the one hand, you have a ‘populist’ Bible-quoting senator, who also happens to be a world-boxing champion, supporting his Bible-bashing president. On the other hand, you have ‘elitist’ bishops, who by virtue of their ancient job description ought to be specialists at preaching and teaching the Bible.

But all they have to offer is the argument from abuse—a known logical fallacy. ‘To the people who use the Bible to defend the death penalty, need we point out how many other crimes against humanity have been justified, using the same Bible?’ the bishops ask in a pastoral statement which was read at all masses in the country. Does this even have the structure of a valid argument? Premise 1: If A = B, Premise 2: and B = C: Then Conclusion: A = C.

Here’s how it fails. Premise 1: The Bible was used to justify slavery, burning witches, anti-Semitism and egocentrism. Conclusion: Therefore it cannot be used to support the death penalty. Have the bishops forgotten that the Bible was also used to fight slavery, end apartheid, and campaign for the rights of Native Americans, indigenous peoples and women? It was the basis for Francis Bacon and Isaac Newton to propel modern science into motion. Well, the automobile is being used as a terrorist weapon to mow down civilians in London, Nice, Nantes, and a dozen other places. So let’s not use it to ferry our children to school?

The pastoral statement of the men in mitres is so nauseatingly sanctimonious and so intellectually vacuous that it almost reads like a missive from the Bishops of the Church of England. ‘Dear sisters and brothers in Christ—let us not allow our wells to be poisoned by bitter water; let us uphold the sanctity of life and make a stand against death penalty.’ The bishops then claim Jesus replaced the Old Testament ‘principle of justice based on retribution—“an eye for an eye, a tooth for a tooth” (Matthew 5:3),’ ‘with the higher principle of non-retaliation of evil for evil.’

The lex talionis—“eye for an eye…” was not retribution. Rather, in the ancient world, this law broke the cycle of revenge by ensuring proportionate justice by compensating the exact equivalent of what the victim had suffered and no more. Jesus also explicitly stated that he had not come to abolish the law but to fulfil it. The bishops claim that ‘Jesus was never an advocate of any form of “legal killing.”’ So what? Jesus never spoke on paedophilia, for that matter! Liberal Anglican bishops claim that Jesus never prohibited homosexuality.

The Bible never prescribes capital punishment for manslaughter. In fact, the Torah legislates for the creation of “cities of refuge” that will protect someone who kills his ‘neighbour unintentionally.’ Moreover, it requires two or three witnesses for a conviction. ‘No person shall be put to death on the testimony of one witness.’ But premeditated murder is so serious that ‘you shall accept no ransom for the life of a murderer, who is guilty of death, but he shall be put to death.’

The Bible upholds the death penalty precisely because it upholds the sanctity and dignity of human life and of every single individual who is created in the image and likeness of God. In some sense, therefore, homicide is tantamount to deicide. Philosophers like Kant and Hegel insisted that the death penalty, far from degrading the convict, affirmed his humanity by affirming his rationality and responsibility for his actions. Execution, when deserved, was required for the sake of the convict’s dignity, they said. What if the Bible actually affirms the dignity of the murderer by prescribing capital punishment?

President Duterte believes that capital punishment is a deterrent. So did Ernest van den Haag, Professor of Jurisprudence and Public Policy, Fordham University. He suggested that if a state announced that murders committed on Mondays, Wednesdays and Fridays would be punishable by death and murders committed on the other days of the week would be punishable by imprisonment, there would be a significant drop in murder on Mondays, Wednesdays and Fridays.

Can the Catholic bishops tell us what they would do to justly punish Anders Breivik who went on a shooting spree in Norway killing 77 people? Breivik got 21 years in prison. That’s about 100 days per murder. Is that what a human life is worth? Breivik serves his sentence in a three-room cell with TV, exercise room, and IKEA-style furniture at taxpayers cost.

In Norway, Anders Breivik is smiling as the judge reads out his sentence. In the Philippines, the Bible-believing Filipinos are cheering as Duterte summons the firing squad. In the Vatican Pope Francis is calling on judicial systems to go even further and ban life imprisonment. Francis believes both the death penalty and life imprisonment are forms of ‘penal populism’ because they punish crime instead of pursuing social justice! In this brave new world of Catholic “social justice” one wonders who has the last laugh? The murderer or the victim?