NewsPaperthe art of publishing
Home News Police cower from criminals. Burglaries are ignored. The Tories will pay for...
0

Police cower from criminals. Burglaries are ignored. The Tories will pay for this betrayal 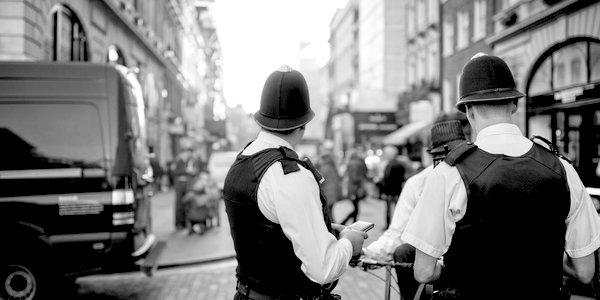 The Left’s war on reality has many battlefields. Policing is one of the most bitterly fought, with much death and misery. This week David Wilson, professor of criminology at Birmingham City University, said: ‘Offenders are in the position of being the hare while the criminal justice system is the tortoise.’

The truth of this was dramatically illustrated last month when 100 travellers moved a cavalcade of caravans into the Thwaites brewery in Blackburn the better to ransack it.  They began a three-day rampage of criminal damage, theft and threatening behaviour, fitting in a shoplifting spree nearby. The main target of the raid appears to have been copper wiring worth thousands in the brewery. Police did not arrest any of the thieves and they drove away with their plunder at their leisure. It is unclear if they were British.

Lancashire police said: ‘We didn’t stand by and let things happen. We took decisions, based on the resources we had available at the time during an extremely busy weekend of unprecedented demand, along with consideration for our officer safety due to numbers of travellers and their potential hostility, not to go to the site. Officer safety is and has to be integral to any operational decision.’

How strange modern Britain is. Police must be kept safe from criminals. Note that pointed comment about resources and demand. The police are now in effect a large and politicised trade union well versed in Marxist social policy. When you combine that with the political class’s complacency about crime and disorder and the Left-wing ideology that runs through British institutions like the lettering in a stick of rock, you have a recipe for a nasty mess. I suspect the police are seeing how far out of control the streets can become before some more Government money arrives.

Consider these figures reported in The Sunday Times: just 4 per cent of robberies were solved in England and Wales last year, compared with 9 per cent in 2013. The burglary detection rate fell during the same period from 6 per cent to 3 per cent. In more than 1,000 neighbourhoods with at least 30 crimes, the police failed to catch and punish any of the suspects. There were 355 burglaries last year in the Derbyshire Dales: none were solved. There were 159 robberies in Holloway Road and Highgate Hill in north London, the two streets most plagued by an epidemic of moped gang crime. To date, one offender has been punished.

Police numbers have been falling and this, plus the weakness of the criminal justice system and sentencing authority, has not gone unnoticed by the criminal classes. Indeed a leaked Government document in April found that criminals may have been ‘encouraged’ by a fall in police numbers and prosecution rates.

They may well also have been encouraged by statements such as that from Sara Thornton, head of the National Police Chiefs’ Council, who said: ‘There are a lot less burglaries than there used to be, a lot less car crime, but the sorts of crimes that are on the increase – sexual offences, concerns about terrorism, cyber crime – that’s where we really need to focus.

‘We need to move from reacting to some of those traditional crimes to thinking about focusing on threat and harm and risk and really protecting the public.’

No doubt victims of ‘traditional crime’, such as terrified householders tied up and beaten while burglars ransack their homes, will be comforted that cyber crime is being given priority.

It has been clear since the disastrous New Labour years that the political class wants the public to become used to a level of criminality hitherto regarded as unacceptable. You will note that this defeatism does not extend to an area of criminality that obsesses the Left: ideological crime. Look at London. Its mayor Sadiq Khan is so exercised by what cranks write on social media that he has set up a Scotland Yard department to monitor it.

And while some crime goes unpoliced as a matter of policy, for example see the collapse in recorded cannabis offences reported this week, some areas of police behaviour are micromanaged to the point of absurdity: non-Muslim officers fasting in Ramadan or wearing rainbow face paint at a Gay Pride march.

Then there is the entry requirement for every constable to have a degree-level qualification. So the future the establishment envisions for law enforcement will be uniformed community activists armed with the dumbed-down degrees of modern Britain. The day may come, perhaps it is already here, when the officer you have called to your burgled home gives you a lecture on social justice.

Add in Theresa May and Mr Khan’s disastrous knife crime policy, as previously discussed in The Conservative Woman, and you have a picture of policing the way the Leftish official classes want it. Cressida Dick, the head of the Metropolitan Police, has reportedly been trained by Common Purpose, a group dubbed ‘the Left-wing freemasons’, whose courses have been attended by thousands in the public sector. Critics of the group say they are operating a highly political agenda, which is to install new chosen leaders in society.

This seems plausible when you consider that one area of law and order is subject to rigidly enforced policy requirements, and that is our old friend Diversity. Police numbers have been falling since the early Noughties. In 2004 there were more than 138,000 officers compared with about 123,000 in 2017. However, the number of female and ethnic minority officers has steadily risen. The proportion of female officers rose from 20 per cent in 2004 to 29 per cent by 2016. The proportion of ethnic minority officers is at a high of 6 per cent.

That a Conservative government presides over the current level of crime and disorder is proof, if it were needed, that the party has been completely hollowed out by political correctness and an uncomplaining acceptance of the Blairite inheritance. For the most part Westminster, the media, the judiciary and the academy live in a parallel world, an ancien régime shored up against reality by special advisers, PR people, think tank reports and advocacy groups.

If people cannot rely on the authorities to maintain law and order then eventually some could take matters into their own hands, as we have seen with the online groups policing child grooming and paedophilia.

I suspect the Tories will pay a price for their irresponsibility and betrayal of the silent majority in due course, just as Labour’s betrayal of its voters led to Brexit and Corbyn. But who knows what outrages may have occurred by then?