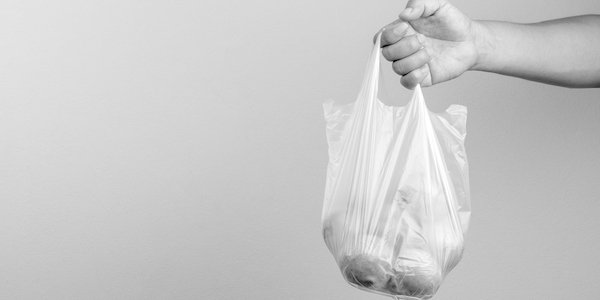 REMEMBER The Graduate? After the anxious adolescent has been floating aimlessly face down in the opulent swimming pool, his father’s chum whispers in his ear: ‘Plastics, Benjamin, plastics.’

Now it seems western consumers are all anxious. Plastic, fossil-fuel-derived, is everywhere, and is destroying our environment. (Although not as much as it might do, since a good proportion of our own plastic waste seems to be destroying other people’s environments. Witness the Waitrose and M&S packaging in the many container-loads pitching up in Malaysia, which the authorities there are about to send back to their countries of origin. Good on them!)

Research indicates that 82 per cent of UK shoppers believe that the plastic packaging of food needs to be drastically reduced, and 30million of them reckon that plastic pollution is the single greatest threat to life and the environment in modern history. (Phew . . . does that not sound like a GCSE science question?) The research claims that 114,000 tons of plastic packaging ends up in landfill every year, and that 18.7million consumers won’t purchase from retailers and companies that are known to have poor environmental standards on packaging.

Well, there you have it. Plastic packaging bad. No plastic packaging expensive. And also a lot more inconvenient. So no prizes for guessing what the vast majority of shoppers continue to load up in their trolleys. Being genuinely environmentally friendly isn’t an easy option.

But maybe these virtue-signallers (in word if not in deed) are not just under-informed about recycling. The real ignorance appears to lie in their lack of understanding about the massive significance of packaging in the 21st century. Perhaps it’s time to get real with not just recycling, but also the growing benefit of developments in packaging technology.

Gary Buchalter, Innovations Director, RPC bpi protect, has written extensively (OK, yes, he’s probably a wee bit biased) about the damaging effect of demonising plastic packaging. He agrees that the oceans are being dangerously polluted by plastic debris, but suggests this is not the fault of plastic as such, but of the shameful failure of society and its consumers to take responsibility for waste management and constructive recycling. In his view, plastic makes a major contribution to a more sustainable world, and that the current obsession with promoting what the virtuous claim is ‘green’ risks a series of unintended consequences with a far more damaging environmental impact than plastic now causes.

He identifies major areas where real progress has been made, in spite of proliferating packaging – food waste, litter prevention, and a more technologically responsible attitude to recycling.

Food waste is a vastly more damaging problem than packaging waste. Waste from restaurants and fast-food outlets is shameful. But domestically, many consumers throw away food even before its best-before date has expired. Around 1.3billion tons of solid waste produced globally each year is from food production. This also causes other resource wastage. It is estimated that water equivalent to three times the volume of Lake Geneva is used to produce food that ends up wasted. In sub-Saharan Africa, half of all fruits and vegetables produced are lost in the post-harvest stage or processing.

Food waste can be reduced in many ways, by harvesting techniques, improved factory processes, domestic common sense. But plastic appears to play a key role in minimising waste in terms of crop protection, managing light transmission, safe and hygienic transportation, and keeping foods fresh for longer. Did you know that an unpackaged cucumber will be past its best after three days, but if protected by a plastic film will stay in prime condition for two weeks?

Litter is now acknowledged as a primary packaging issue, and the Blue Planet series on television has highlighted this. But it’s people who throw the stuff away. Consumer awareness campaigns have been shown to change behaviour: witness smoking and drink-driving. The same should be done for littering, both domestically and industrially. That will require political and legal will, and sanctions which actually hurt.

The most important aspect of plastics control will mean an improved infrastructure for recycling. Gary Buchalter’s research revealed that four-fifths of consumers recycle all the time, but there was still a good proportion who didn’t fully understand the rules. Some were, perhaps rightly, cynical about how effective local recycling measures were. We’re back to that plastic mountain in the Malaysian jungle.

I like Gary’s message: that global waste management, recognising the need to redesign for enhanced recyclability, and fighting litter can work. But how Utopian. People have got to want to do it, in industry and in the home. What we need to do is to stop demonising plastic, and turn our attention to lazy and entitled consumerism, which always reckons it’s somebody else’s problem.

I can think of many examples of massive plastic (and paper and metal) waste as a result of making modern life better. For one, while I was undergoing a minor medical procedure (testing for wound infection), the young doctor filled an entire refuse sack with the packaging, the implements he used, his hat, gloves, gown and footwear. Such dedication results in zero MRSA infection in Swiss hospitals (where the procedure took place).

Shoppers in Switzerland are already educated to disdain the plastic bag, and come to the supermarket with their Umwelttaschen, cloth shopping bags which can be reused indefinitely. But you have to be organised, and aware. Some retailers go even further. In our Aldi Suisse there is a huge bin just beyond the check-outs where you can discard all the packaging, plastic or otherwise, which you don’t want to take home. Because this would cost you money – all domestic refuse has to be binned in bags which you pay for. There’s so much consumers can do, but it costs, and it always takes personal effort.

There are many consumers suffering from Manmade-plastics Adverse exposure Disorder (or just MAD shoppers) who virtue-signal against packaging as such. Maybe they should just do a Ray Mears and learn their survival bushcraft, living within the landscape and seeking not to change it. Desperately hard work, highly skilled, limited-resource dependent, exposed to the elements and seasons and darkness, and not much diversity when it comes to planning your dinner. I don’t see it catching on.

And finally: banks don’t want your paper cheques any more; governments don’t even want you to be able to use cash. So what are we left with? Good old plastic!