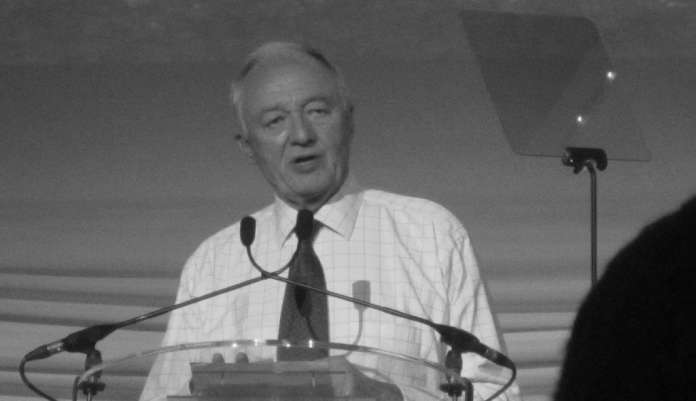 Labour is now more or less an openly anti-Semitic party.

Despite the denials and protestations, the party as a whole does not see anti-Semitism as racism. Had it done so, then the media storm it now finds itself in would not have happened.

Ken Livingstone is currently in the eye of this storm. Although suspended from the party, it is highly unlikely that he will be expelled. Instead there will be a decent interval, presumably after next week’s elections, when the suspension will be lifted.

While decent people everywhere would have found Livingstone’s comments incorrect, ignorant and outrageous, no-one has examined why he made them, apart from assuming that they were merely part of the hard-left narrative that hates America and thus Israel and therefore Judaism by extension. Everyone has assumed that this skilled operator, whose razor-sharp political skills have kept him at the forefront of British politics for over three decades, now finds these skills dulled with age. After all, he is now in his seventies.

This may not be the case. Livingstone may have knowingly achieved exactly what he wanted, which is to hoover up the anti-Semitic vote in the forthcoming elections.

It is an open secret that Labour is going to get slaughtered in these elections. It is also seen as more catastrophic because at the same time in the electoral cycle in previous decades, Labour was gaining seats and control of local authorities. The election of Jeremy Corbyn, while a success for the Left, has been an electoral disaster as local by-elections have shown over the last six months. It does appear that popular support for Corbyn is confined to those people who have registered their support for Labour and few others.

So Labour has to cast around for other votes. But then this has been the norm for Labour for about two decades.

Labour won in 1997 under Blair because it had rebranded itself. New Labour was centrist, pro-business, pro-American and was seen as safe for people who had previously voted Conservative. Margaret Thatcher counted the rise of Blairism as one of her finest achievements. At the time, I believed that the Conservative Party had won the 1997 election; it was just the wrong Conservative Party.

Of course, the desperate coalition of this ‘broad church’ political party was doomed to fragment, especially after Blair’s more or less Conservative-style foreign policy, which Corbyn and his ilk despised. Hope could only turn to disillusion among voters who had bought Blair’s idealism but found it did not deliver. The rank and file, also known as ‘Old Labour’, who had been brought to heel only by the threat of a fifth election defeat after 1992, could only get restless as they saw little ideological difference between Blair and the Conservatives.

There was also the hard fact that aspirational people who enjoy increased affluence from their labours will prioritise ‘conserving’ their wealth and vote for a party that will help them do this. The clue is in the name. This hard lesson had been learnt by Labour when they lost the 1992 General Election to the surprise and outrage of the political commentators. It was a shock for them and the Left to discover that people would not vote for a party that promised tax rises. In fact, I do not believe that any party that has promised an increase in direct taxation to the voters at election time has ever been elected in the last six decades or so. Ed Miliband somehow believed that going into an election pledging to restore the 50p tax rate and also creating a property-based wealth tax would somehow break this rule. He was wrong. Catastrophically.

Labour has always projected itself as the sole party of the victim. Its problem has been that a few years ago, the list of ‘victims’ was growing shorter as the country became more tolerant and affluent. So it followed the quasi-Brechtian solution of voting in a new electorate. This has to be one of the reasons behind Labour’s historic open-door immigration policy, about which its canvassers were told to distract voters during the last general election. They had to do this because debating immigration has now become respectable. Labour’s denouncing of any debate as ‘racist’, while successful for half a century, is no more. Multiculturalism died in this country when the ravaged bodies of the teenaged girls in Rotherham and elsewhere were revealed to have been covered up in the name of diversity.

In addition to importing voters and changing Britain’s electoral map, it was revealed that open-door policy was designed to ‘rub the Tories’ noses in diversity. Putting strain on such state services as education and health was designed to score an ideological point and by doing so, to remain in power. The ever-larger class sizes, hospital waiting times and housing shortages were seen as irrelevant.

It is a hard fact that the cultures of the countries, from which came the new arrivals to our shores, were considerably more racist, sexist and homophobic than ours. In some cases they were also viciously anti-Semitic. Given that life in this country, irrespective of which party is in power, is a clear improvement on life in other countries, political preference would be informed less by domestic economic and social policy and more by foreign policy, especially a party’s stance on Israel and Judaism in general. Anti-Semitism has certainly informed the politics of Bradford. It is, therefore, disappointing to discover that the person who ousted George Galloway as MP for Bradford West seems to hold views that are little different from his. But this is what Labour had to do to recapture the seat. Galloway was in tune with his electorate.

Naz Shah’s defence that she held these views before she became an MP is spurious. Before Shah became an MP, she was a prospective parliamentary candidate for Labour. Prior to this, she was on the shortlist. Prior to this she was an ordinary member of the Labour Party, although she admitted voting for Galloway in 2012, so she had not been one for long. At no time between Shah joining Labour and her being elected did the party realise that she was relaying and embellishing anti-Semitic content on the internet, or if they did, this did not concern them.

And that is the point. All of the exposures of anti-Semitism have not been performed by Labour, but by third parties, notably the Guido Fawkes website. Guido is not a large operation, and it may be that interested volunteers are providing tip-offs, like today’s revelation about Jeremy Corbyn’s tacit approval of anti-Semitism while he was working for Iran’s Press TV. For some reason, this was not seen as incompatible with being n a Member of Parliament in the Labour Party. In that context Labour’s selection of Shah is consistent. Labour has not been vetting members for anti-Semitism. There is no reasonable explanation for this blind-spot, apart from tacit approval.

It is inconceivable that Shah will be ejected from Labour, even though she deserves to. Had this been a Conservative MP associating with the English Defence League, they would have been gone before the day was out. But this is the state of equality in modern Britain. There’s one law for the socialist anti-Semites and another for racists.

Of course, there are strident voices in Labour decrying anti-Semitism. But they do seem to be coming from those MPs that were dispossessed by the election of Corbyn. We are forever being told that it is the membership, not the MPs that matter. If that applies in economics and defence, that surely must apply to the party’s clear antipathy for Judaism. And this is why Livingstone will not be kicked out of Labour.

It is clear that the members, especially the new ones, agree with him. John McDonnell’s ‘out, out, out’ call against anti-Semites in this context may be a part of positioning himself to succeed Corbyn, whose denial of a crisis over anti-Semitism in Labour in the face of clear evidence is either exposing him as unsuited to leadership or is an indicator of his reluctance to take action against  people whose views are similar to his own. McDonnell is already doing the rubber chicken circuit in constituencies in emulation of Michael Heseltine’s covert campaign before he raised his standard in 1990.

Knowledge of Labour’s anti-Semitism is now in the public domain. People in this country whose sympathies lie with German National Socialism can now vote for an English Democratic Socialist party that they know will reflect their views. And that may have been exactly what Ken Livingstone wanted.