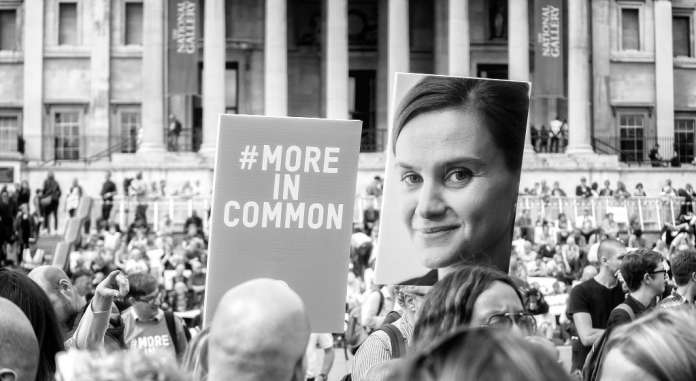 The late Mrs Jo Cox MP was not killed by a terrorist. She was killed by a murderer. It is not possible to terrorise a corpse.

Maria Norris asks in the New Statesman ‘A far-right terrorist murdered Jo Cox. So when is the Cobra meeting?‘.  She equates the activities of the fanatic Thomas Mair with the killers of Lee Rigby and asks why they are treated differently. Once again this is muddled socialist thinking, trying to find equality where none exists. Fascist murderers in this country are loners. There is no umbrella organisation directing or encouraging their activities over the internet. For the most part they are fantasists. Fascism of the kind exhibited by Mair and the Soho pub bomber is rare. There are few followers. It is their rarity that arouses media attention whenever they congregate. Counter demonstrations are usually larger.

There is no widespread organised fascist underground, nor are there large numbers of the British public holding secret fascist sympathies just waiting for ‘The Day’. More people in this country want the incorporation of Sharia Law into our legal system by whatever means than want a British Fuhrer to assume power. Not that you would know this from listening to leftist rants. To them, anyone to the right of Leon Trotsky is a fascist. And socialists, including most, if not all, left-wing feminists, have no problem with a Sharia Law that treats women as second-class people.

The killers of Lee Rigby, by contrast, were religiously-motivated, attending mosques and other gatherings which are distinguished by their regularity and frequency. Their preacher at the Lewisham Islamic Centre recently lost a libel case to the BBC over being labelled an ‘extremist speaker’. They were pawns in the hand of Islamist terrorism, which has provably numerous followers worldwide to the point it can make war in some countries.  They are not the same.

All this left-wing heat and light tries to do is to make us believe that there is a widespread and organised fascist underground consisting of thousands of members distributed across the country, all coiled to strike. They use this fiction to try to impose more and more restrictions on freedom of activity and thought. A prime example of this has to be the recent banning of Milo Yiannopoulos from making a lecture at his former school, which was seen as an issue for counter-extremism authorities. It is clear the people imposing the ban read the New Statesman.

The media make a great play of Mair’s book collection. Most of these books are, in fact, about the uniforms and other regalia of Nazi Germany. Owning them is not a crime, nor does it mean that the owner has fascist inclinations. Andrew Mollo is an expert on military uniforms, who applied his skills to direct a drama-documentary It Happened Here about a hypothetical aftermath of an  invasion of Britain by Germany in 1940. He has made a career from ensuring the authenticity of uniforms in film and television, including Downfall. By the standards of the media hysteria exhibited, he should be on a watch list. Military historian Kenneth Macksey wrote the definitive depiction about how a Nazi invasion of Britain could have succeeded.  He did not do this out of misplaced wish-fulfilment or as an expression of disturbing sympathies.

Based on the rantings of the media, Sir Ian Kershaw, the UK’s most prominent expert on the history of the Third Reich, and biographer of Hitler, should be on the list, as well as Richard J Evans, author of a noted trilogy on the history of Nazi Germany, in keeping with his great interest in German history. The late Captain Eric Brown CBE, DSC, AFC, Hon FRAeS flew numerous captured Luftwaffe aircraft and wrote several articles collected into book form about his experiences. He was a fluent German speaker and was in Germany at the time Poland was invaded. A suitable case for re-examination?

Left-wing paranoia about fascism curbs free speech and has led to the suffering of thousands in this country. Bogus accusations of racism are bandied around unjustifiably to advance careers and stifle debate. There is no good reason why no one is in jail for the thousands of British girls mutilated by their families to restrict or destroy their enjoyment of sexual intercourse, other than investigations and prosecutions would be incorrectly equated with pogroms. The Rotherham gang rapes of hundreds of girls were facilitated by the same attitudes among those who were meant to keep these victims safe from harm. No one has been charged over these criminal levels of negligence.

It was the late humorist Alan Coren who stated that only three kinds of books were certain to sell well in Britain: those about golf, cats, or which had a swastika on the cover. This is a commercial reality, not an indicator of widespread neo-Nazi thought amongst the cat-loving, golf-playing British populace. Thus the first edition of a collection of his writings from Punch was entitled ‘Golfing For Cats‘ and had a large Nazi symbol under the title. It was not a manual for Aryan supremacism.

The history of the Third Reich reads like a horrific science fantasy story to the point it has inspired science fiction films, like Star Wars. Its leaders had the look of coming from Hollywood central casting for Eastern European villains. This may explain the ongoing public interest. But this interest should not be an indication of a fascist underground that is ready to strike. Mair should be rightly condemned for his perverted actions, not for his perfectly legal ownership of some books.