NewsPaperthe art of publishing
Home News Patrick Benham-Crosswell: Fatboy Kim is not much of a threat - yet
8

Patrick Benham-Crosswell: Fatboy Kim is not much of a threat – yet 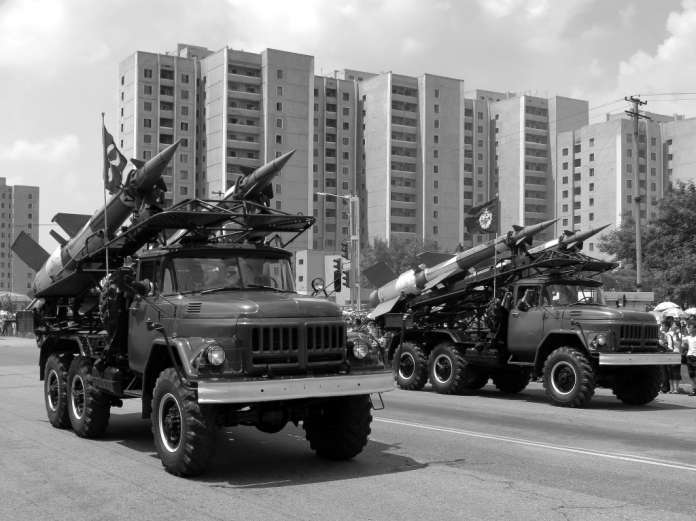 North Korea has always struck me as being quaintly bizarre, a regime so closed that it almost seems to seek a different planet. Thanks to its version of communism, North Koreans enjoy a GDP per head of some $1,800, compared to the $36,500 per head of the South Koreans. The economy is a basket case, but in spite of this,  Chairman Kim Jong-un has some 25 nuclear warheads (possibly a hydrogen bomb), chemical weapons, missiles able to hit Japan, China and parts of Russia, the largest army in the world and the stated intention to develop a missile capable of hitting the United States.

Should we Brits be worried about it? North Korea is, after all, on the other side of the world so we are unlikely to become enmeshed in any direct action – unless the US or Canada is attacked by North Korea and invokes Article 4 of the NATO agreement.

The Korean border remains the most intensely militarised frontier in the world, (remember the Korean War has not ended, they’re is just a 60+ year long ceasefire in place), so a war could start there very quickly. That war would immediately involve the US, which has some 30,000 troops based there. While the North Korean army is huge and its kit generally good (circa Soviet 1990 capability), the terrain is not easy, as was proved last time around. The combination of the formidable South Korean armed forces, backed by the US, is probably too tough for the North Koreans to sweep aside in a conventional battle. The use of chemical weapons by the North would be unlikely to confer sufficient tactical benefit to triumph. Which leaves them the choice of stay at home, or roll the dice with nuclear weapons.

Of course, these nuclear weapons prevent, or at least enormously complicate, any attack on North Korea in pursuit of regime change. While such an invasion may have been an interesting option a decade ago, the Iraq and Afghanistan fiascos have dampened enthusiasm for such objectives. In many ways, therefore, the song remains the same. The North cannot invade the South, and vice versa. All the nuclear weapons do is increase the stakes if things get irrational.

Of course, Fatboy has the option of launching his missiles at nearby cities, with chemical and conventional warheads as well as nuclear ones.  But what does that benefit him?  Such an attack would deplete his arsenal and invite retaliation, either in kind or (more likely) the incremental destruction of his armed forces by the massively superior technology of the West – akin to the operations over Serbia. It is unlikely that smothering the South in fallout and nerve agent would facilitate invasion, or the benefits of such an invasion. While North Korea is undoubtedly bizarre, it is not irrational.

Whereas the similarly bizarre Albania under Enver Hoxha eased its way into the modern world following Hoxha’s death, North Korea is now on its third generation of Kim. At some point the regime will change, probably as a result of spending unsustainable levels of its GDP on the military (some 16 per cent, which is a similar level to that which eventually broke the Soviet Union). Quite how that will happen is unfathomable, but that will be the time of greatest concern as instability and nuclear weapons are unhealthy partners.

It is increasingly possible to destroy ballistic missiles in flight. The Patriots shooting at Scuds in the 1990 Gulf War were lucky, but technology has moved on. Note that it is significantly harder to hit an intercontinental ballistic missile (ICBM) than tactical / theatre missiles like Scud. (The reasons are both simple, ICBMs fly higher so fall faster, and complicated – some ICBMs are capable of violently evasive actions). North Korea is seeking to develop ICBMs, but most tests have failed – although North Korea has launched satellites. Moscow is “protected” by an anti-ICBM system which itself uses nuclear warheads. The US also has a system.

For other ballistic missiles the counters are much more potent. As well as Russia and the US, Israel has several systems; modern anti-aircraft missiles have the capacity.

So, Fatboy has some nuclear warheads that he cannot deliver with any great certainty of success, a huge army that probably cannot conquer the South and an air force that is generally reckoned to be unable to protect its own airspace. He is not, therefore, a threat. He would become one if his ICBMs worked – as they surely will one day, unless his regime falls apart.

So it is a case of keep calm and carry on. Rather than worrying about nuclear war, ponder how to help a collapsing authoritarian state change in a stable manner. More wisdom, not more belligerence.

Share
Facebook
Twitter
Pinterest
WhatsApp
Previous articlePaul T Horgan: Labour do not oppose Conservative grammars – they fear them
Next articleCresta Norris: We could afford a 7-day NHS if we stripped out social care costs