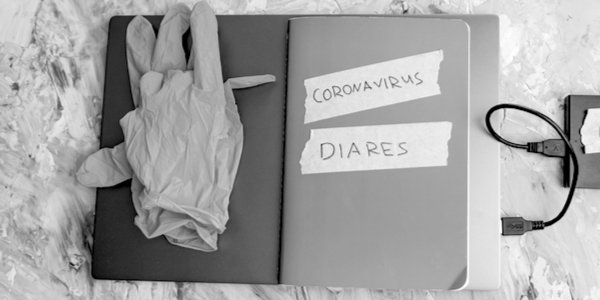 DEATH toll in Britain tops 7,000. Boris is still with us.

I visited my corner shop yesterday, succumbing to a faintly suicidal urge, that strange mix of elation and apprehension many of us feel at the moment. It does seem strange even now that going to a shop can be a lethal decision, but this one is so cramped that even the mice should be wearing masks. In the narrow aisles people mill about, some trying to avoid others by squeezing backwards almost into the empty shelves where hygienic wipes and Dettol used to be. Others, particularly young men, stand in groups or talking into their mobiles, apparently oblivious to any crisis. As Daniel Defoe wrote in A Journal of the Plague Year, ‘It was impossible to beat anything into the heads of the poor.’ (We might substitute ‘young’.) ‘They went on with the usual impetuosity, madly careless of themselves, fool-hardy and obstinate, while they were well.’

Others are overly anxious. In the shop, a neighbour came rather close and whispered, ‘I know someone who’s selling sulphides. I’ve got her number.’ She didn’t say that this would prevent me getting the virus. She knew I would not be sympathetic. ‘It boosts immunity,’ she said. Among the gluten- and dairy-free ladies locally, who for a food only really trust hummus, ‘immunity’ is the watchword. The internet now promises many new ways to boost it, some quite subtle, to attract the educated woman. Since the start of the crisis it’s been almost impossible to buy vitamin D supplements in shops or online. I’ve recently received internet messages about the ‘Five Stunning health benefits of Medicinal Mushrooms’ from the
green-sounding Food Revolution Network. ‘Mushrooms are more closely related to humans than plants,’ they say. Something I’d not thought about before. More importantly, ‘they can defend themselves against their enemies, and support your body’s defence mechanisms’. Their message is clear: buy fungi to fight the big C, not your old buttons but our Chaga, Reishi, TurkeyTail, Shiitake, Lion’s Mane and Cordyceps. All are given their Latin names for extra authenticity. They are ‘medicinal’, ‘fight inflammation’, and most importantly, ‘aid the immune function’. They come in the form of pills, costing 60 dollars (60 per cent off). You could also try some ‘bone broth’ pills for 70 dollars (special offer) plus shipping costs.

In times of what Defoe called ‘A National Infection’ people are susceptible. ‘These terrors,’ he wrote, ‘led them to a thousand foolish things, running to fortune-tellers, cunning-men and Astrologers.’ On January 22, when only nine people had died of the virus in Wuhan, an article in a Belgian newspaper quoted a GP from Antwerp claiming ‘5G is life-threatening, and may be linked with current events.’ As the death toll in China rose his scientifically baseless notion sparked a fire on social media. Fear of 5G mobiles was soon backed by Hollywood stars, TV celebrity Amanda Holden, and a petition with more than 110,000 signatures.

London Live, a metropolitan TV channel, decided to help by bringing back David Icke. ‘One mischief always introduces another,’ as Defoe put it. Icke, a former BBC sports reporter who after seeing a psychic called Betty Shine declared himself ‘Son of the Godhead’ and in 1991 announced to Terry Wogan that ‘the world is about to end’, now has his own YouTube channel which is a cauldron of interesting ideas. On April 4 fires were reported at 5G mobile phone masts in Birmingham, Liverpool and Merseyside. Two days later on YouTube Icke said: ‘If 5G continues and reaches where they want to take it, human life as we know it is over.’ That video was watched by 65,000 people, some of whom called for more attacks on towers. The Department for Digital Culture & Media had to go on Twitter to deny such ‘dangerous nonsense’, as Michael Gove described it, but at least 20 masts have been attacked over the last few days. Being unable to control terrible events led to the burning of old women in Defoe’s time. These days similar anxiety has broader targets; Icke also claimed that a coronavirus vaccine, when developed, will include ‘nanotechnology microchips’ allowing humans to be ‘controlled’. He added that Bill Gates, founder of the giant Microsoft Corporation, who’s helping fund Covid-19 vaccine research, should be jailed.

During his experience of plague, Defoe found himself surrounded by fortune-tellers and ‘cunning-men’ who erected signs everywhere advertising their skills while the government did little to stop them, ‘unwilling to exasperate the people’. ‘There was no remedy for it,’ he wrote, ’till the Plague itself put an end to it all.’ He meant it killed off those ‘calculators’ and ‘Quacks’. We must hope our present ones will fade away soon, along with the virus, but no doubt in the future they will mutate into some other laughable form.

This first appeared in the Salisbury Review.