Migrants and the French revolution 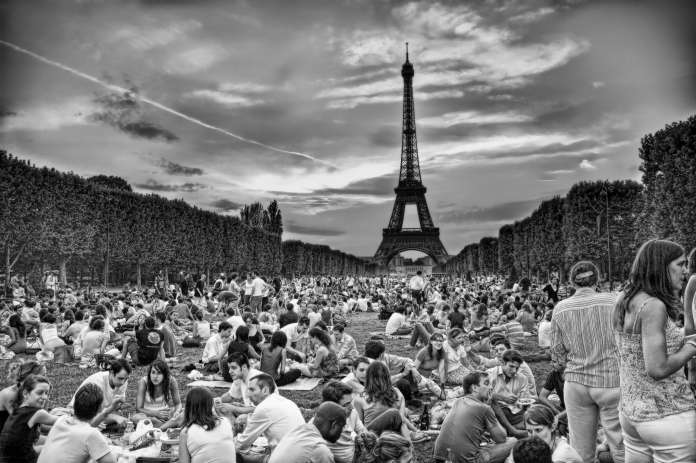 I SPENT last weekend in Paris to celebrate my birthday with some friends. I saw the Leonardo exhibition, walked around St Germain in the beautiful, very cold sunshine, ate four wonderful meals in exactly the kind of good, characterful restaurants you imagine, enjoyed the late 19th century Parisian atmosphere and succeeded in navigating the baffling Châtelet-Les Halles overland and underground railway hub to find the train to take me on the ten-minute trip to Saint-Denis.

In Saint-Denis stands the basilica where most of the French kings and queens are buried, from King Clovis I (481-511) and the Merovingian rois fainéants to King Louis XVIII, the last French king not to be deposed, who died in 1824.

A necropolis is an odd place to visit on one’s birthday, I suppose. Remember you must die, as a Roman celebrating a triumph was reminded by a slave sitting beside him. Not that I consider my life so far exactly a triumph. Still, as Napoleon III said when asked what he had achieved, I have survived.

But countries die, as well as men.

On the train my companion and I were the only white people in our large carriage. When we arrived at the town of Saint-Denis (population officially 110,000 but allegedly much more) the buildings were Gallic but the atmosphere was Third World.

It reminded me a little of Algiers, a city I love, but Algiers feels very much more French: the inhabitants are white, many men wear berets there and veils are illegal.

The first time I had heard of Saint-Denis since my childhood was in an article by Ben Judah, which contrasts the tomb of Charles Martel, who saved France from Islamic invasion, with the modern Saint-Denis.

He wrote: ‘Last week one of the cathedral’s priests was savagely beaten here, thugs mistaking a long thin book for an iPad. Then they bolted, leaving him with a bleeding nose on the square. My notebook fills with stories like this: of thieves, hoodlums and pickpockets. This is nothing like poor London.

‘The streets of Saint-Denis talk as if the authorities have lost their grip. Jihadists are waging a dirty war on the Republic, recruiting intensively in these banlieues. Since 2012, stabbings, shootings and car rammings have taken place every few months, punctuated by slaughters such as Charlie Hebdo and the Bataclan.

‘It was here after the Bataclan massacre that the police stormed the hideout of the terrorist mastermind, firing 5,000 rounds. Three jihadis were shot dead, minutes from the cathedral. Their stated ambition was to start a civil war.’

Googling, I found this startling piece of information. In the nameless decade before this one, a French blog called Le Salon Beige received an email from a reader who had visited the Basilica of Saint-Denis and was surprised by the brochure he picked up there, called ‘Tour of Discovery for the Young’:

Page 9: ‘In the Bible we find the story of the Angel Gabriel, the very one who would bring the Koran to Mohammed, who announces to Mary, a young girl engaged to Joseph, that she will soon give birth to a son named Jesus.’

An article that appeared in the Daily Mail last year about Saint-Denis was taken off the net after complaints from a French Muslim activist that it was islamophobic. It is polemical and inaccurate, but a very interesting eyewitness account.

‘Inside the World Express cafe, groups of men argue in Arabic. On side streets, men smoke shisha pipes and talk – again, in Arabic – on every corner. Women shop in veils and scarves, always accompanied by a male relative.

‘As a white European, I attract odd looks. When I take out my mobile phone for a photograph, a young man jumps in front of me, waving his index finger in my face, shouting: ‘La! La! La!’ (No! No! No!)

‘Yet this is not an exotic, far-flung destination. This is France. Moreover, this is Paris and only six miles from the Eiffel Tower.

‘The reason for all this activity – in an area which even the most optimistic estate agent would struggle to sell as ‘cosmopolitan and bohemian’ – is quite simple: immigration on a mammoth scale.

‘The scale of the problem grows each day. An estimated 80 migrants arrive in Paris every 24 hours – 550 a week.

‘Many head for Saint-Denis because of its closeness to transport links, including the railway lines heading towards the north coast, and Britain.’

The highlight of my wonderful two days was a sung Tridentine Mass at the beautiful baroque Church of Saint-Nicolas-du-Chardonnet, which was seized by the followers of Archbishop Lefebvre in the 1970s. It is a bastion of Catholicism as it was before the Second Vatican Council, when Catholicism opposed the Enlightenment, the French Revolution, the heresy of modernism and the Republic.

Both the old France of Church and Throne, which I love and consider the true France, and the Republic, based on the values of secularism, equality and the rights of man, are threatened by a new and very powerful challenge.

The last time I was in Paris, in 1989, I was taken to a good party where I met a waif of a redhead, whom I was delighted to find was, like me, a monarchist.

Are there many monarchists in France? I asked her. She looked at me in great surprise and made the magnificent reply: Everyone in France is a monarchist.

Evidently I had penetrated an exclusive social sphere.

That girl is now, God willing, in her fifties and perhaps the mistress of a chateau. I wonder whether she thinks Paris is still Paris.

I like the Paris that Napoleon III and Baron Haussmann built, the Paris of the Belle Époque, the Impressionists, the Metro signs and Proust, but I always greatly regret the old Paris, with its narrow streets in which barricades could easily be erected, that was demolished for political reasons to make way for the city we know. Another new Paris will replace the one the tourists love and it will be in large part Muslim.