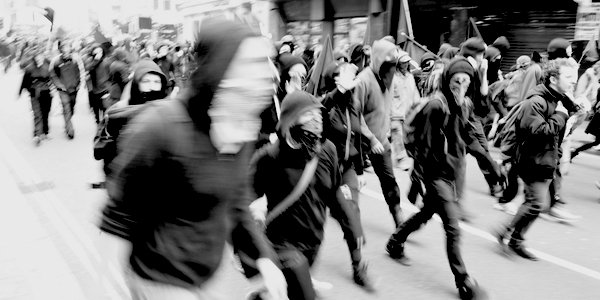 In the 1970s when many of us were irritating students, we believed passionately in, well I can’t quite remember what, but we harked back a lot to the glorious Russian revolution and were strangely preoccupied with Trotsky. We also believed that our democratic society, which we didn’t like much anyway, was under dire threat. This idea was supported by reading Karl Popper, who warned that an open society had to, somehow, protect itself from entryists who did not support openness.

As youngsters we believed this threat to the freedoms we took so lightly came from the neo-Nazi skinhead thugs of the National Front. No one, no matter how politically prescient or obsessed with science fantasy, could have predicted the situation we are now in where white, mainly middle-class, thugs working for university degrees attack free speech and democracy in the name of largely theocratic forces.

Last week youths wearing black masks and calling themselves ‘anti-fascists’ invaded a talk organised by King’s College London’s Libertarian Society, setting off smoke bombs and attacking security guards. They grabbed the speakers’ microphones before smashing windows and, in a rather literate way, leaving lengthy notes threatening the organisers with consequences. The building was evacuated and several security guards and students were taken to hospital.

The protesting students objected to the presence of Dr Yaron Brook, who represents the Ayn Rand Institute, a Californian think tank which seeks to ‘reverse anti-reason, anti-individualism, anti-freedom, anti-capitalist trends’, a very broad, rather vague remit and about as relevant to real politics as the death of Trotsky. He was accompanied by English YouTube personality Carl Benjamin, a games developer who goes under the name ‘Sargon of Akkad’. He calls himself a ‘classic liberal’ but is an anti-feminist Brexiteer.

Neither Ayn Rand nor Sargon of Akkad has much influence on the new political alliances which will shape our world in the future. Professor Ed Byrne, principal of KCL, issued a rather predictable statement about ‘providing an environment for open and uncensored debate’, but he needn’t really have worried. People were beaten up on his watch, but those who did it are no more relevant than the radical students of the 1970s. What is worrying is the vacuum being created as the Left ignores the real threats to democracy and free speech.

We’ve almost got used to childish students trying to close down debate. This fad seems to have started in 2010 at Durham University when a debate about multi-culturalism was cancelled. It caught on, and since then we’ve had the ‘no-platforming’ of universities minister David Willetts, Eric Pickles, former IMF chief Dominique Strauss-Kahn, Marine Le Pen and Julian Assange. Perhaps most famously, Germaine Greer, once the darling of the permissive society, was banned from speaking at Cardiff University in 2015 because of her ‘transphobic views’ after 3,000 students signed a petition urging staff to cancel the lecture.

The key stupidity of this became apparent last year when students tried to ban Nick Lowles, director of Hope Not Hate, a campaign which seeks to counter racism and fascism. He was blocked by NUS Black Students, a ‘politically autonomous’ wing of the National Union of Students, who accused him of holding ‘Islamophobic’ views.

‘My crime has been to repeatedly call on the anti-racist movement to do more to condemn on-street grooming by gangs,’ he told the Guardian, ‘and campaigning against Islamist extremist groups in the UK and abroad. It’s amusing in its absurdity but it does reflect the failure of a small section of the Left to understand that we have to confront extremism and intolerance in all its forms.’

He summed it up, and something unimaginable and bizarre has happened: Left-wing students attack a man supporting human rights to support Muslim misogyny. This behaviour exposes their hypocrisy and double standards. The most tragic example was surely the no-platforming of Maryam Namazie at Goldsmiths, University of London, in December 2015. She is leader of One Law for All, which campaigns to end the power of Orthodox Jewish and Muslim Sharia courts in the UK, which she believes ignore the rights of women. The meeting was broken up by the college’s Islamic society, who call her a heretic. After the event Goldsmiths’ Feminist Society and its LGBT+ group issued statements supporting the Islamic society which had stopped her speaking. ‘It felt like a knife in my back,’ she told Guardian journalist Nick Cohen on BBC Radio 4 last week.

In the 1970s, when we were so worried about the National Front, none of us thought that in the future, without the beloved Soviet state, our children would be breaking up meetings in support of sexual minorities who are not threatened in the UK, and the anti-feminist, anti-gay religious Right.

Socialism is dead but in the interest of a warped view of ‘anti-imperialism’, the new buzz phrase, liberal freedom fighters, particularly ex-Muslims such as Maryam Namazie and former Manchester city councillor Amina Lone, are seen as the enemy. Lone was dropped by her local Labour party last summer after she opposed young girls wearing hijabs in primary school.

In his radio programme, Cohen explored the strange silence of the liberal Left over matters such as Sharia courts, where Muslim women are denied their basic human rights. He put part of the refusal to face real issues down to fear. Maajid Nawaz, founder of the anti-extremist Quilliam Foundation, found himself on a jihadi hit list.

But he was also attacked by the Southern Poverty Law Centre in Alabama, who normally take on the KKK. They accused him, a former radical Muslim, of being an ‘anti-Muslim extremist’. Liberal Muslims like him find themselves called Uncle Toms and bigots and no one on the Left wants anything to do with them.

Battle-scarred gay rights activist Peter Tatchell, once a Liberal saint, was ‘no-platformed’ in 2016, after supporting a Belfast baker who didn’t want to put a gay slogan on a cake. He told Nick Cohen: ‘What is so hypocritical and inconsistent on the Left is how they rallied against apartheid in South Africa and General Pinochet but when it comes to tyranny in Iran they are silent. This double standard denies the Left the moral authority it needs to be an effective force in British politics.’

The snowflakes who landed on the meeting at KCL like wet sleet are not important; they will wash away like water. They are strangely close to the imperialists exemplified by Cecil Rhodes whom they so despise; showing that they do not really expect foreigners, even those who’ve lived here for generations, to have the same democratic standards as us. In their eyes Muslim women can suffer in Sharia courts because that is their culture. They shouldn’t expect the same equal treatment as white Western women.

There is silliness and sadness in this but also danger. The Left has turned away from the centre ground, not to embrace political reality but fantasy. While they make idiotic gestures they ignore the dangerous new alliance forming between Russia, Iran, Syria and Turkey. They ignore tyranny which creates more migration and instability, and they will not face up to radicalisation among migrants in the West. In this age of fear and intolerance, who will step into the void they have left behind?