Leslie Loftis: Ted Cruz can stop Trump – to the fury of GOP bosses 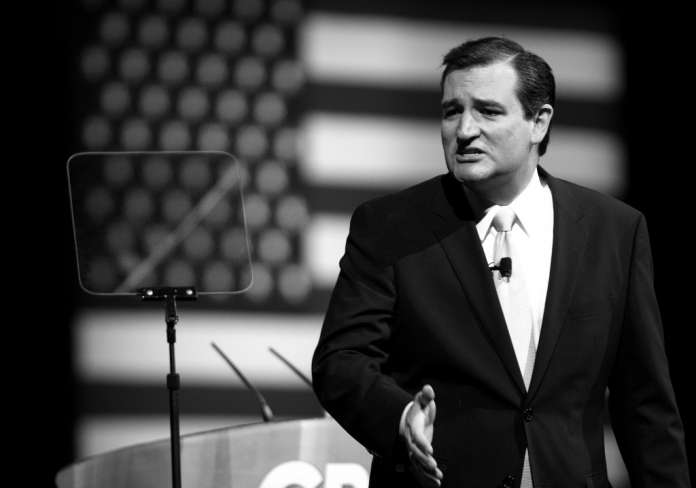 What in the hell is going on in the US Election?!

For anyone looking to America and trying to sort out Trump and the appearance of has-beens Palin and Dole, an explainer.

The Democratic and Republican powers that be are stale, controlling, dense, out of touch, and have little concern beyond self-preservation. Main Street Americans are trying to wrest control from those party chiefs. On the Democrat side this power play centres on trustworthiness. Bernie Sanders has it, Clinton, and her political machine so well-oiled from decades of continuous scandal, doesn’t. On the Republican side the power play is about principles. The base is local government, devolution types while the establishment GOP is like Tories—big government is great as long as it advances the politicians’ pet policies.

This popular resistance movement has surprised the Republican establishment even though this battle was set back in 2012. Recall, Romney had to defeat each non-establishment preferred candidate individually. Against protests from the base that he could not defeat Obama, the power brokers insisted upon Romney. The long election schedule and many debates are designed to help the GOP pliant candidate. In 2012, they got their candidate, but the base was vindicated. Romney lost.

This time the powers seek to shove another pliable candidate upon us, but they don’t have a preferred candidate and the base is fed up with their game. Enter Donald Trump.

Last summer, as Trump surprised everyone with his poll performance, some of us writers from flyover country pleaded behind the scenes for DC beltway insiders to pay attention to what Trump’s popularity meant, to understand why people liked him.

I used a motherhood analogy. Think of the day when you walk pass your teen’s disaster of a bedroom. In the kitchen you find the overflowing rubbish that has not been taken out for collection. Meanwhile, your teen is sprawled out on the furniture watching TV, texting friends, and yelling across the house that he needs money to go out with said friends for pizza. The morning before, when you asked your teen to tidy his room, well, you asked. Later that day, you told her to do her chores. That evening, instructions turned to warning. Now, after the bin collectors have left so you face a week of rubbish bags in your garden, you begin to shriek about this lazy and presumptuous child.

The conservative base is the furious mom. The Republican establishment is the layabout teen. The shrieking—that’s Donald Trump. He comes after disappointment with Bush I, Dole, Bush II, McCain, Romney. He brashly proclaims things that the establishment has ignored.

Dense as ever, the establishment types chose not to hear the frustration. Instead, they smarted off, became the huffy teen who complains that mom is unjustifiably screaming and petulantly blames her for not keeping the house tidy. This reaction made the base angrier, and the Trump-drama was irresistible ratings gold for TV. His popularity held.

Stunned and confused, the establishment has never unified behind a candidate. Oh, they threw $100 million at Jeb Bush’s campaign, completely oblivious to the coalition of objections to a Bush III. Mostly they managed to starve out the other proven governor candidates. And now, when the base/mom has calmed down from her anger and is planning real consequences for her layabout teen—that’s where Senator Ted Cruz comes into this analogy. Cruz is a genuine social conservative and believes in confronting the enemies of civilisation both at home and abroad—the elites are panicking.

They may hate Trump, but they think they can preserve their power by deal making with him. Or they just want him to best Cruz and then they will bolt to Hillary or Sanders in the general. Either strategy underscores their lack of principles, the essence of the base’s objection. The party powers know Cruz will not cut deals with them against the American public. They may hate Trump, but they hate and fear Cruz.

So now as Cruz has gained, Bob Dole jumped up to boost Trump. Dole was the too-old-but-it-was-his-turn candidate who ran against Bill Clinton in ’96. (Link is one of the top hits when you Google the Dole/Kemp ticket.) Dole endorsed Jeb Bush last fall but is in the news now calling Trump better than Cruz, who would be an electoral “cataclysmic disaster.” He would know. He lost to scandal-riddled Bill Clinton in a landslide. His support is comic relief, not productive advocacy.

Last Friday, a handful of conservative pundits participated in an all not-Trump edition of National Review, the magazine that the hate-Trump-but-hate-and-fear-Cruz crowd reads. They each wrote a persuasive essay against nominating Trump. The Republican National Committee promptly— as in within hours— dropped National Review from the upcoming debate with CNN.  Actually, they had partnered with NBC, but the MSNBC debate the GOP had organised last October was so obnoxious and devoid of substance that the RNC pulled the NBC partnership a few weeks ago. Yes, the party is a mess.

Trump is worried too. He is trying to shore up his support, which is leaking to Cruz, with endorsements from personalities such as Sarah Palin. Trouble is, Palin has continually diminished ever since she resigned as Governor of Alaska. Some of us pity her because we see her decline as more of a reaction to the smear campaign against her in 2008 than, for example, the self-inflicted decline of Ann Coulter. Regardless, her endorsement will not likely be helpful to Trump no matter if the New York Times still thinks she is a conservative darling. (Advice: never rely on the NYT for insight into what the Right thinks.)

Going into the state primaries, Trump is collecting endorsements from the cynical GOP elite and the still-angry base. He has them both believing he’s their guy. But the cynical group has a terrible track record and the angry group is shrinking because they see if Trump secures the nomination, then he will bitterly disappoint one of those groups.

Get ready for Cruz.