Last rites for the integrity of public exams 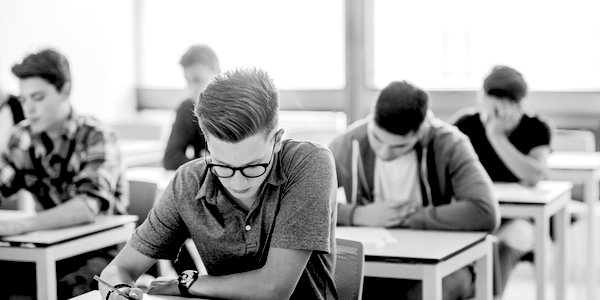 WITH a ‘pass’ mark (Level 4) of 15 per cent in 2015 and of 18 per cent last summer, one might have imagined that GCSE mathematics could not be any more dumbed down.

Not so! Consequent upon the current disruption to schooling, the demands placed on young people by public examinations now require further dilution. The Office of Qualifications and Examinations Regulation (Ofqual) has published proposals which in effect pronounce the last rites on any integrity left in the examination system.

Some schools, especially in the private sector, have provided impressive online teaching for their pupils during the lockdown. In addition, many of next year’s GCSE and A-level cohorts, pupils in years 10 and 12, have been back in school since June 15. Too many of these age groups, however, have been suffering badly from a lack of online support and from a refusal of some schools to re-admit them. Some teachers even appear to have largely downed tools, aided and abetted by their unions.

How many teachers, I wonder, are using the time freed by school closures to earn some extra cash through private tutoring? Do some teachers have a vested interest in keeping schools closed? The longer the schools are closed, the greater the parental demand for private tutoring. It can work out as nice little earner for some supposedly stay-at-home teachers. This option is not available, of course, for less well-off parents. Lockdown is ever widening our social divide.

Ofqual is keen to help but its response is as predictable as it is short-sighted. It is proposing to cut syllabus content for the majority of examination syllabuses to make that ‘pass’ mark of 15 per cent or thereabouts more readily attainable. At Ofqual’s discretion, of course, the ‘pass’ mark could be lowered to match the interest rate for savers that is, also, a repercussion of the pandemic.

So, next year, it’s going to be French, German or Spanish GCSE exams without the language – or at least the spoken version. This will be replaced by what Ofqual describes as a ‘teacher endorsement’ that will appear alongside the overall grade. Dr Tony Breslin, a distinctly off-message former chief examiner, told the Daily Telegraph that removing the oral component from modern language exams was ‘like removing numbers from maths’.

Chunks of GCSE history syllabuses, too – up to 20 per cent – are due for the chop. Three of the four examinations boards, though, with Ofqual backing, have bestowed compulsory status on one topic that is, presumably, regarded as non-negotiable for examination purposes – ‘Non-British Depth Study’.

Nor will GCSE science fare much better. Practical work – experiments – are for the push. As for GCSE geography – well, who needs fieldwork? Questions relating to it are to be removed. English language GCSE is due to go the same way as modern languages with teachers not having to submit a recording of a pupil’s speaking skills.

And so on, and so on . . . with GCSEs in music, in dance and in physical education suffering the unkindest cuts of all – only solo performances allowed! Musical ensembles, dance quartets and team sports are all outlawed for assessment purposes.

All in all, there could be no better way further to devalue our examination currency and, indeed, our economy. As we enter the post-Brexit world, what could be more important, for example, than communicating in the language of those to whom we may wish to sell goods and services? A good command of spoken English, too, would not come amiss and nor would an ability to do some sums. The first calculation that government needs to do is work out that its promise to ‘level up’ will not be achieved by levelling down even further the public examination system. What next – a driving test devoid of a requirement to use indicators or to perform an emergency stop?

Ofqual, needless to say, sees things differently. Sally Collier, its chief regulator and chief executive, has told the Sunday Times that ‘all our kids are brilliant’.

This appears to be the examination watchdog’s guiding principle. As education secretary, Michael Gove restored a little more rigour to examination syllabuses. Ofqual’s response was to lower the grade boundaries. Even though the lockdown was introduced after the teaching for this year’s examination syllabuses was mostly complete, it decided to base this year’s results on the notoriously unreliable method of teacher predictions. A 2016 report for University College London concluded that ‘16 per cent of applicants’ grades were correctly predicted. A further 8.5 per cent of applicants were under-predicted, whilst the vast majority (75 per cent) of applicants’ grades were over-predicted.’

And now, for 2021, we have Ofqual’s proposal to employ what the former chief examiner quoted above described to the Telegraph as ‘a bit slash and burn’. In contrast, Sally Collier told the newspaper that Ofqual would ‘help reduce the pressure on students and teachers, while allowing them to progress with valid qualifications which higher educational institutions and employers can trust’.

Grade boundary manipulation, predicted grades and decimated content! It would have been serious enough if Ofqual had confined its role to being the watchdog that does not bark. It has, however, gone further and is now instrumental in devaluing the examinations currency. There are monetary parallels in Weimar Germany, Mugabe’s Zimbabwe and today’s Venezuela.

As with its initiatives over grade boundaries and predicted grades, Ofqual’s proposal to cancel exam content will work only if it can also cancel reality. In the meantime, employers and universities would be well-advised to set their own assessments.