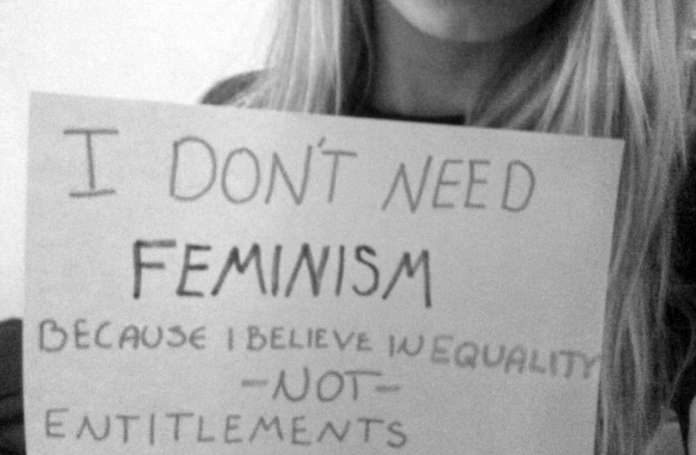 When will feminists get it? When will the penny drop that their complaints are futile and that women who want to get on are better left to fight it out in the free market?

Never, I suspect – in case they find themselves out of a job.

They’ll be the last to fess up to the fact that female victimhood myths and female empowerment ideology, far from helping women in the workplace, hinder their progress.

Able and determined women have never needed the helping hand of the equality police or gender parity policy to get to the top.

Self-respecting women should be offended by the thought. What they need is a single-minded determination to succeed, to ‘sacrifice’ to it, if you will, other roles, demands or duties in life. Likewise men.

Politicians need to wise up.  Calls to smash the glass ceiling, to eliminate the gender pay gap or to end so-called sex differentials, all regularly bleated out from Parliament, academia and the media, were shown years ago to rest on faulty assumptions and outdated evidence.

A new international glass ceiling index comparison confirms this.  Unpicking it for CapX last week, Nima Sanandaji demonstrates once again the sheer futility of socialist-inspired gender parity demands.  His analysis of the index shows that it is the free market not feminism that serves ambitious women best.

The less the (necessarily state interventionist) ‘gender agenda’, the more women get on, nowhere more so than, guess where, but that free market economy of the USA. It does not surprise. Another little known fact in that US males top the international league table of household chore-sharing too. Leave it to the couple (without state intervention) to manage the division of labour and they sort it out.

Yes, the US tops the glass ceiling index; 43 per cent of women managers there have smashed it, considerably more than in any other modern economy and over the 40 per cent demanded of British boardrooms today,  David Cameron and George Osborne should take note.

Our feminist ideologues will hate this news. It should pull the rug right out from under their complaints industry feet; an industry that shows no sign of ceasing if last week was anything to go by.

A year on from Sir Tim Hunt being hounded out of his job and hung out to dry for naively commenting that women cry at work – they do, I have  – these hardliners are still at it, dominating the airwaves and presenting a negative role model for women.

Ursula Martin, a Professor of Computer Science at Oxford University, used her platform last week at the Hay Festival to take out one unsuspecting young computer scientist for his unforgivable category error, on which she based her claim of ‘staggering’ sexism’ in the computer science industry.  She ‘bawled’ him out, she said, for the crime of presenting his vision of ‘enhanced humanity’ in the male form.

On PM on Radio 4, Caroline Criado-Perez similarly went nearly hysterical over unpalatable Demos research which had the temerity to show that half the trolls who make misogynist remarks on Twitter are female.

Nothing must challenge the premise of her pals’ latest campaign to: ‘Reclaim the Internet’ from sexism and hate speech towards women, nor their quest for permanent victimhood status, personal police protection squads and compulsory gender education.

Complaining is a nice little earner as the bevy of carping feminist writers on Woman’s Complaint Hour earlier this week confirmed.

What, after all,  do these ‘opinionated’ women almost exclusively opine about and then get invited onto other media by other angry and discontented females to go over  again? The sexist discrimination women they think they are still subject to; which is why in their book, shock and horror, twice as many opinion columns are written by men as women and why so few women write about hard subjects. Maybe men know more. Heaven forfend.

The irony – that amongst these female justice warriors none appeared to have had any aspiration, foiled or otherwise, to be Middle East, EU or climate science or STEM experts or indeed to demonstrate any garnered knowledge on such matters – clearly escaped them. Even when asked to write on the EU, one of these said moaners proudly assured her audience, she took the opportunity to write about the lack of female voices commenting on the EU. What else?

Any girl aiming for successful career would be forgiven for believing  the only sure way to get on, as a woman, would be to join their feminists’ complaints industry, as a moaner or a monitor, and, given the prejudice, forget STEM all together.

Historic women achievers abound, such as Caroline Herschel (1750-1848)  who between 1786 and 1797 who discovered eight comets, as well as discovering fourteen nebulae; Mary Somerville (1780-1872) whose last scientific book, Molecular and Microscopic Science was published in 1869 when she was eighty-nine;  Elizabeth Garrett Anderson (1836-1917) a pioneering physician and political campaigner and the first Englishwoman to qualify as a doctor; Hertha Ayrton (1854-1923) an expert on the subject of the electric arc; and Dorothy Hodgkin (1910-1994) nominated more than once for the Nobel Prize, which she won in 1964 for her work on penicillin and vitamin B12.

Had our ambitious young woman  been taught about such figures at all, it would have been as oddities who escaped the patriarchal net,  viewed through a feminist lens, not as women of rare talent and single minded determination who made a choice.

It is bizarre that feminism is the ism that stands in her way when an unfettered free market would leave the field open to her.