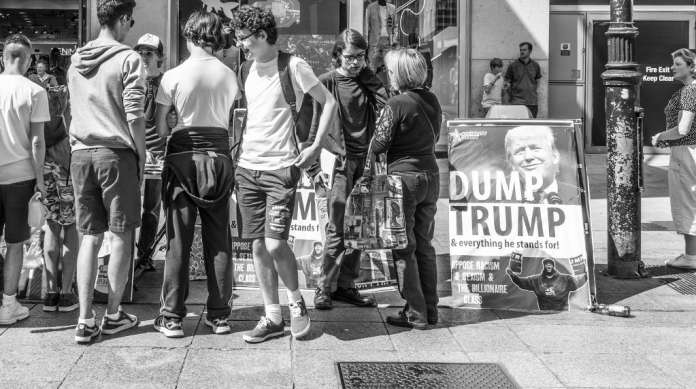 There’s a new puritanism abroad, a new moral army on the march sweeping all before it. Rooting out misogyny is its mission. As the reaction to the Trump’s sex tape stole the headlines, it was Oliver Cromwell not George Orwell who came to mind.

Trump has proved a gift to the feminists. What an opportunity to make men sign up. Convert – accept feminist orthodoxy – or you too will be publicly pilloried.

Just three months after MP Jo Cox’s murder, we find ourselves in the grip of a new hysteria. Commentators are literally queuing up to publicly register their moral revulsion at the second of today’s twin evils of racism and sexism, desperate to distance themselves from recalcitrant and unspeakable members of the male species like Trump.

On the Andrew Marr show yesterday, Tim Montgomerie (right wing political commentator) and Kate Andrews, IEA news editor, established themselves as the eager right wing ‘reps’ of this new moral army. Together, they sat in pious condemnation of Trump.

The Republicans knew what he was like so why didn’t they deal with him earlier? Tim bemoaned, still not getting it.

It was themselves they needed to deal with.

I detect snobbery as well as sanctimony in the near universal media condemnation. Trump may seem beyond the pale but it is in him that  disaffected Republican grassroots have found the one and only candidate guaranteed to put two fingers up to the smug and entitled liberal elite.

In response, frightened Republicans from Condoleezza Rice to Mike Pence run to the embrace of liberal fascism, as Jonah Goldberg calls it, to distance themselves from this marked man, distancing themselves further from their grassroots in the process.

And what of Trump’s crime so heinous but that hasn’t landed him in prison or made him ineligible for office? Was it rape, the physical assault of a wife or girlfriend? Did he drop date rape drugs into girls’ drinks or, maybe, order rent boys and poppers?

No, it was none of these.

All the 11-year-old ‘sex tape’ dug out by a dirty tricks department ‘proved’ was his misogyny (a sub genre/crime of sexism in modern feminist parlance). In old fashioned English, a bit of lewd boys’ locker room bragging and banter. It hit the media button though and whipped up a frenzy.

So far only Nigel Farage has had the guts to say that Trump’s was not an unusual male boast. I’d venture too it’s the sort men make who aren’t so successful with women. Less bad than sad. As in this particular case where he admits, despite all that money and fame, the lady in question was having none of him.

How many of Bill Clinton’s ‘conquests’, I wonder, were likewise accorded an opportunity to refuse his advance? Jackie Kennedy described Clinton’s  attempt to “seduce” her as a “wrestling match” as a man not for taking no for an answer.

Readers of Primary Colours (a roman a clef of Joe Klein on Clinton’s first Presidential campaign) can come to no other conclusion than that Bill Clinton was always a sexual predator who abused his office and power to entrap, even impregnate, women – from unsuspecting librarians to the vulnerable daughters of his black supporters, as well as impressionable interns.

Nor were all his ‘victims’ women whose ‘stock in trade’ was a provocative dress code – ‘notice me I am sexy’ – designed to expose their body beautiful and project their allure for career or relationship advancement. Please don’t tell me that was not what TV host Nancy O’Dell in her ultra tight and all revealing bodice was about; flaunting her sexuality for whatever man might come into her sightline? It was not aimed at impressing a woman boss to be sure.

If that’s your selling point fine, but don’t expect men not to come on to you. That, of course, is a feminist heresy I have just written.

Which is exactly why puritanical feminist commentators have had nothing to say about the bevy of Trump’s old fashioned temptresses.

So no, it’s not the faint tang of the tics tacs that stinks for me. It’s the stench of the commentators’ sanctimony and hypocrisy that gets up my nose.

Where do all the eager Trump detractors stand on John (if I don’t have sex every day, I get a headache) Kennedy?

OK, so may be the Kennedy brothers wouldn’t have got away with sharing Marilyn Monroe while they were both married in today’s times. May be that third entitled brother Edward could not have walked away from a drowning Mary Jo Kopechne with only a two-month suspended sentence.

But will we see our new moral army demanding a full and abject public apology from every living member of the Kennedy and Clinton clans for the heinous crimes their members committed against women? Unlikely.

It is not as though Trump has even ever run on a social conservative ‘paragon of virtue platform’, unlike all previous GOP candidates. Yet we still get faux moral outrage over things known about him already. He is lewd and coarse. So are many women and men. His real crime is his political incorrectness

And this is why morally bankrupt Republicans like eager new recruits are busy brandishing their feminist credentials:

“I am sickened by what I heard today. Women are to be championed and revered, not objectified”, so uttered the sanctimonious Republican House Speaker Paul Ryan

Expect many more to do the same now. Canadian writer Kelly Oxford has called for all women to tweet their first experiences of sexual assault. Oh what fun it’s going to be.

Rather, it won’t be for men.  But Donald’s not for quitting. The race is not over yet. Against all predictions, despite all that feminist fury, he won the debate last night.

Fewer people care what the new breed of liberal fascists think than the MSM would like to believe.

Far from Trump being toast it may just be that it is their time that is running out.