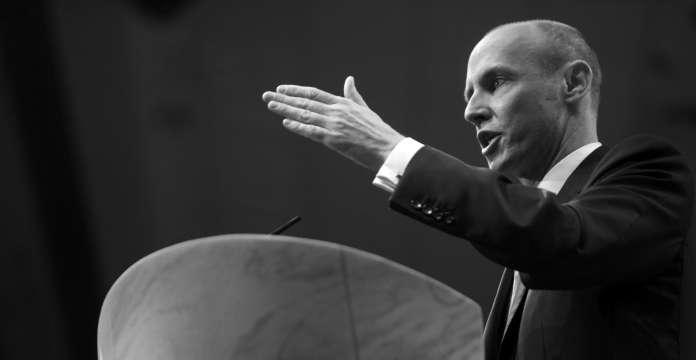 It is ironic that arguably the most brilliant politician in Britain today – a Conservative MEP who believes the United Kingdom would prosper better outside the EU – has no power, no position and, in essence, no party. I am talking about Daniel Hannan.

But if Hannan achieves his one aim – to get Britain to vote ‘out’ in a referendum – his job will have been done. This man of principle, a rarity in today’s self-interested and opportunist political world, will have voted himself out of a job.

Yet he is a better speaker than William Hague who I heard at his best and most confident back in 1998 at the Carlton Club. He casts the populist eloquence of Nigel Farage (whose party Hannan has emphatically declared he will not join) into the shadows – though Farage’s ‘note free’ speech to a Midlands Industrial Council event I was at last summer impressed me. He is better too, by far, than David Cameron whose recent conference speech – praised across the conservative spectrum from Lord Ashcroft (who welcomed him back to the Party) to Max Hastings – has been enough to shoot him ahead in the polls.

If anyone doubts my dramatic assertion then please just follow this link to Dan Hannan’s analysis of all that is wrong and stultifying about our relationship with the EU and his vision of a re-energised Britain out of the EU, in his speech to the 1900 Club and the Centre for Policy Studies last Thursday evening.

This was no speech drawn up by spin doctors or pondered over by ministerial special advisers. As with Churchill, his words came from his own mouth and reflected his own convictions. He was witty. He was erudite. Above all he made total sense. My only sadness was that a wider audience did not hear this passionate and erudite speech. It deserved it.

He had just come back from witnessing the EU’s Commission hearings – which he characterised as a competition between nominees in outdoing each other in zeal for more Europe.

Britain’s nominee, Lord Hill, one of the more democratically acceptable of the nominees, he said, was no slouch. This former lobbyist had assured his hearing panel that he would put the EU’s interests above those of the City of London. Dan thought we we would like to know. We did.

If that was bad, it went to worse. Other nominees, in that classic European tradition, had come to the Commission having just been thrown out by their own voters. This he said appeared to be the key criterion for nomination. Jean-Claude Junker was a case in point.  Slovenia’s outgoing Prime Minister another – (having just lost her own election, she had, in the nick of time, appointed herself as her country’s Commissioner to the EU).

Only the Brits would find this funny. We did.

But warning of the perils of pessimism, Dan set out his positive vision of a Britain unshackled from the corpse that is the EU. Our past and our future is as a nation of global traders, yet, we have allowed ourself to “be trapped in the only trade block in the world that is dwindling economically”.

At our nadir, at the end of the 1960s, we had turned our back on he world and towards a then ascendant Europe. Now ascendant ourselves  our membership today puts us at an almost unique disadvantage with the rest of the world.

According to Hannan, to thrive and realise its full potential Britain needs:

3. An end to the Common Fisheries Policy – which has unnecessarily but inevitably decimated our waters of fish.

4. An independent Diplomatic and Foreign Policy – “why do we need to be routing our foreign policy through Baroness Cathy Ashton? … What an extraordinary thing that we of all countries do not think we are able to have influence in the world independently”.

5. British rather than EU citizenship – “how many of us are enriched by it? From that stems most of the things that cause popular discontent – reciprocal residents rights, reciprocal welfare claimants …. These should be a matter of voluntary bilateral agreement.”

6. An end to the symbols and trappings of EU ‘statehood’ – “we are now expected to stand to attention in the European Parliament when they play Beethoven’s 9th symphony!”

7. Fiscal autonomy – no Financial Transaction Tax, no Carbon Tax – “Why do we allow the EU to dictate levels of indirect taxation? Shouldn’t we be encouraging tax competition not tax harmonisation?” And, “If the rest of the EU is determined to maim itself in this fashion, I don’t see why Britain should feel obliged to follow suit”.

8. Common law not EU law – “Why are we part of the Orwellian entitled Area of Freedom, Security and Justice – a single market for law?” – “A fairly major issue if you are one of the two ‘common law’ countries in the EU, which we are.”

I hardly need mention what Dan made of the European Arrest Warrant – the King parents, who removed their son from Southampton Hospital and who were then pursued as fugitives, were his constituents.

10. A reassertion of the supremacy of the House of Commons – “British Law on British soil.”

We  have wasted a generational opportunity to make these changes. At present Her Majesty’s Government is not pushing for any of them, he said. None of David Cameron’s seven aims for renegotiation include them. None of Cameron’s ‘aims’ require a Treaty change as all these ten conditions do.

In effect, Cameron has sold the British public a pup, though Hannan was not so impolite as to put it that way. He simply said, “there is a biggest mismatch, ever, between what has been said officially on the record and what the public has understood. Bizarrely, this hasn’t sunk in but if there are no intergovernmental talks, if there is no inter-parliamentary ratification involved, nothing has changed.”

Since Britain has lost this opportunity to negotiate over the return of any of these powers the only way now to secure them is (Hannan is emphatic) to vote to leave the EU; to strike such a bargain from the outside, as has been done by the EFTA countries.

But this, he insists, must be done optimistically, positively not negatively: “If (tiny) Norway and Switzerland can, are we not as a global maritime nation capable of surviving as an independent power? How much bigger do we have to be to run our own affairs in our own interests?”

Mr Hannan is without doubt a man on a mission. He is truly inspiring. He leads from the front.

Recalling Judy Dench quoting from Tennyson’s Ulysses in the film Skyfall, he magisterially ended his oration by repeating these famous lines:

“We are not now that strength which in old days

Moved earth and heaven, that which we are, we are.”

Eat your hearts out David and Nigel. Daniel Hannan is in a different league of leadership.