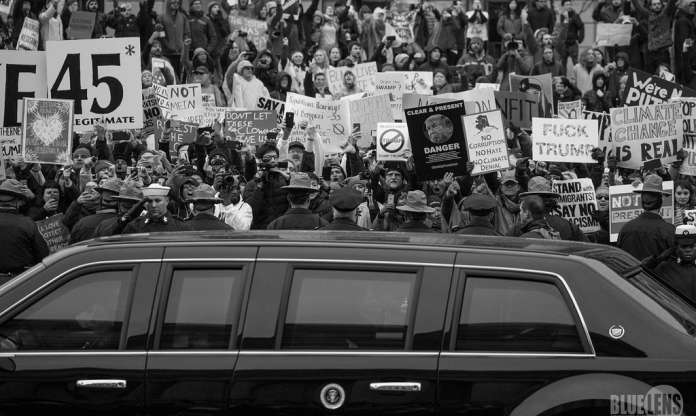 Donald Trump is no longer just a bigot, sexist and racist. He’s also a traitor. That’s what liberal Left would have you believe. There is, of course, an alternative narrative in face of the BBC’s apocalyptic Trump bashing – it needs airing.

Let’s call it the trials of Trump. Our hero has to survive character assassination and calumny as he sets out on his Herculean task of cleaning the Augean Stables. Draining the swamp – taking on Washington’s debased and entitled political culture – means resisting the vituperative backlash that comes with every spade of ordure dug out.

The Left hope to stop him – to shame him into silence and to frighten his supporters into turning on him.

But at every slur, Trump acts. It was an action man, a veritable Captain America who defied the polls, the elite and won the election; an action man who ‘walked towards the fire’ every time his character was tarnished, called a sexist or a woman abuser to destabilise his campaign. Each time he’s hit back. He’s refused to be intimidated by the Left’s favourite trick – character assassination.

Since taking office, it’s gone off the scale. Trump is the sinner to Obama’s saint, the villain to Obama’s hero. Yet for all the righteous indignation over his 90-day migrant ban, his proposed re-alignment of America’s refugee policy has taken him up in the polls not down. Unlike Obama (rhetoric is my middle name) and to the horror of Washington’s elite this President of few (Twitter) words, is keeping his word.

His detractors and opponents won’t lose gracefully. Stuck in their stages of grief they obsess over what next can be done to denigrate him. They count down his days in office to an impeachment they hope to precipitate.

This is how the latest ‘Russian’ outbreak of Trump derangement syndrome can be interpreted, that CNN and the New York Times consumed by a veritable rash of leaks from multiple (unnamed of course) sources, are playing for all its worth; the BBC eagerly following suit over here.

Trump’s team is at war with itself, the White House is in a state of unprecedented chaos. Incompetence and treachery are the order of the day. This is the dominating narrative.

That there is more method than madness in Trump’s first three weeks, as Daniel McCarthy of The America Conservative sets out here escapes the BBC’s overexcited and Trump hating eye.

Just take the delivery of his campaign promises they’ve chosen to ignore – the 22 executive orders that you can read here – which our action hero President passed in less than a month. Yet, with these he has set down the markers ‘that advance both the conservative Republican programme and the agenda of the new nationalist spirit on the right’. Not bad.

His first weeks have been considerably more rational than the frenzied outpouring they have provoked if anyone bothered to examine them. That’s what John Bolton, another informed American and former US Ambassador to the UN, concludes here.

Yet neither Trump’s free market deregulations or his new war on crime and drugs have received any attention – from either friend or foe.  Such has been the media’s shameful addiction to hysteria and alarmism at Trump’s disrespect of their sacred cows, from free trade to liberal (lax) border control.

So is the White House in meltdown at the latest round of alarmism over Mike Flynn’s resignation and Trump’s pick for Labour Secretary standing down, as the BBC’s Jon Sopel would have us believe?

He should keep his hat on. Trump will ride out the Russian plot hype (that members of Trump’s administration team or, even as the rumour factory spews out its latest – Trump himself – mooted unauthorised Russian sanctions deals).

But the culture war will go on. Sopel has called President of the United States and his advisors ‘insurgents’, so has Nick Robinson. In my dictionary this means ‘a person or people fighting against a government or invading force; a rebel or revolutionary’. So insurgency now means any challenge, democratically legitimised or otherwise, to the liberal Left’s claim to permanent power and dominating influence.

Which takes us back to the Augean stables metaphor.

As Professor Mallory Factor has explained, draining the swamp involves fighting his own executive – taking on the ‘hold overs’ and loyalists from Obama’s regime. It means closing agencies, losing jobs and decreasing the government’s bureaucratic and union power, tightening ethics and freezing wages and cleaning out the intelligence agency stables too.

They don’t like it. The executive is at war with its own executive, who, Professor Factor says, would delegitimise Trump any way possible.

Our hero’s trials have barely begun. The potential dimensions of Trump derangement syndrome are beyond prediction.

This is the compass of Trump’s labours of Hercules.