NewsPaperthe art of publishing
Home Kathy Gyngell Kathy Gyngell: Brexiteers do not have Jo’s blood on their hands
80

Kathy Gyngell: Brexiteers do not have Jo’s blood on their hands 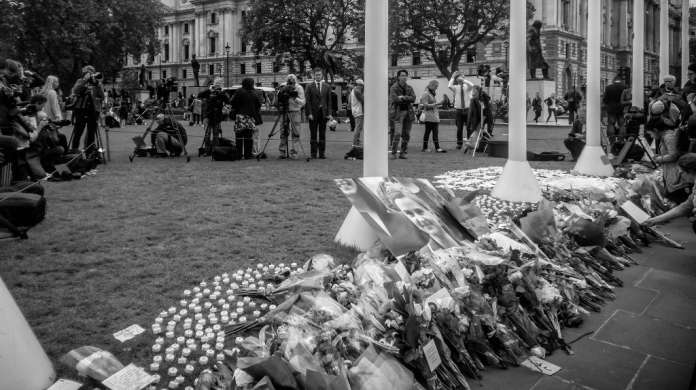 Sentence has been passed. Thomas Mair has been jailed for life guilty of the murder of Labour MP Jo Cox, which the judge said was inspired by “an admiration of Nazism” and similar white supremacist ideas where “democracy and political persuasion are supplanted by violence”.

Responding to this brutally callous murder last June, one of TCW’s writers, Niall McCrae, a lecturer in mental health, wrote he was “… saddened but not completely surprised that another deranged, psychopathic person has taken the life of a public servant”.

He worried that Mrs Cox’s legacy should be the safer care of psychotics, not political point scoring as the pro-EU establishment and liberal left media went to town – exploiting Mrs Cox’s death and casting it as politically motivated to swing the upcoming referendum their way.

Yet just hours before the brutal killing, the accused had vainly sought help for his mental distress. Further newspaper reports revealed Mair had been recently released from psychiatric care and had been on long term medication.

The picture to emerge was of a “loner” with a history of mental health problems as well as of a man with links to and an obsession with far-right organisations. He had, his brother said, an OCD problem so severe that he scrubbed his skin with brillo pads.

The Daily Mail predicted that Mair’s psychiatric history would be at the heart of the police inquiry into the attack, adding that officers were also said to be investigating his links to far-right groups.

But since then silence has reigned on his long-term mental illness, his spells of psychiatric care or medication history. Did he have a history of drug dependency as well? We don’t know.

Throughout Mair’s trial there was no mention of any of this. His far-right links, by contrast were explored, down to the last detail. Police evidence painted a picture of a political activist, a loner obsessed with the far-right who had poured over websites about the Ku Klux Klan.

The media followed suit concentrating exclusively on Mair’s nationalist regalia and books.  The association with Brexit was repeated again before the trial when Martin Schulz, the European Parliament President, sought to make political capital , blaming Cox’s murder on “the nasty referendum campaign”.

Attempts to link her murder to Brexit followed Wednesday’s judgment. Thomas Mair was found guilty of killing Labour MP Jo Cox in a “planned and pre-meditated murder in the run-up to the EU referendum” the Independent reported.

Before the sentencing the BBC confidently announced that: “Jo Cox MP (was) murdered for political cause”.

You’d be forgiven for characterising such reporting as dishonest as well as selective. Was it not equally possible that Cox, as a well-known local figure like Stephen Timms before her, was simply targeted by a deranged and obsessional madman?

We may never know. Mair was sentenced without any psychiatric reports being considered. A defence counsel can only act on instructions from his ‘client’; to seek a psychiatric report Mair would have had to say at least something to his counsel, or to the police. Mair refused to offer any defence.

As it was, all the court heard was a succession of details about his ‘far-right’ obsessions and it was game set and match as to motive.

But under the same logic, Harold Shipman could have been cast as a left wing extremist who was radicalised by the BMA.

Will, I wonder, a psychiatric assessment or report emerge to tell us whether Mair was sane or not – as happened after the Lee Rigby murder trial?

If Mair turns out to be psychotic, he would not be the first or last to act out his murderous rage or to obey ‘Satanic’ demons or voices in his head. The Rigby trial is instructive. Neither Adebolajo nor Adebowale, described by the media as two Muslim fanatics, were able to offer any real defence for their barbaric attack. Like Mair, Adebowale chose not to give evidence.

Both of Rigby’s killers were drug users and one at least mentally ill.

A psychiatric assessment reported after their sentencing, not revealed to the jury at the time, revealed  that Adebowale had a history of skunk use, psychosis and severe mental health problems relevant to the killing.

Unlike Thomas Mair, Adebolajo (described as the dominant perpetrator of the Rigby attack) was  actively radicalised, schooled at the Finsbury Park mosque and had a history of suspected extremist activity. He had been tutored by the extremist cleric Omar Bakri Mohammad, the former leader of al-Muhajiroun, an organisation banned for professing extremist views.

Straight after the sentencing and without hesitation Brendan, Jo Cox’s husband, elevated Mair to a similar terrorist status: “The killing was in my view a political act and an act of terrorism”.

The BBC followed suit labelling it as a far-right terrorist murder. Their Six O’Clock News reporter concluded that, “Her politics led to directly to her death”. The Telegraph was quick to frame Mair as a far-right ‘terrorist’ and the Independent as a white supremacist and “terrorist”.

Brendan Cox says he hopes that “the country will also take something from this – that Jo’s death will have meaning”.

Well, he can rest assured, the meaning is already taking shape. It is not, unfortunately, an outburst of concern for safeguarding the public from deranged loners or deranged loners from themselves – or for dealing with the very real mental health threat that ‘community care’ has turned into.

Nor is this the threat uppermost in the BBC’s collective mind: which all too predictably is now ‘how we are dealing with the Nazi threat to society?’ in Justin Webb’s hyperbolic words.

In the wake of Donald Trump’s victory, the temptation to conjure up a white supremacist political threat bogeyman comparable to Islamist terrorism is proving just too great.

What an effective way to shut down “those in politics, the media and our own communities” that Brendan Cox fears “seek to divide us”. For as to the nameless ‘those’, we can only guess as to whom his insinuation refers.