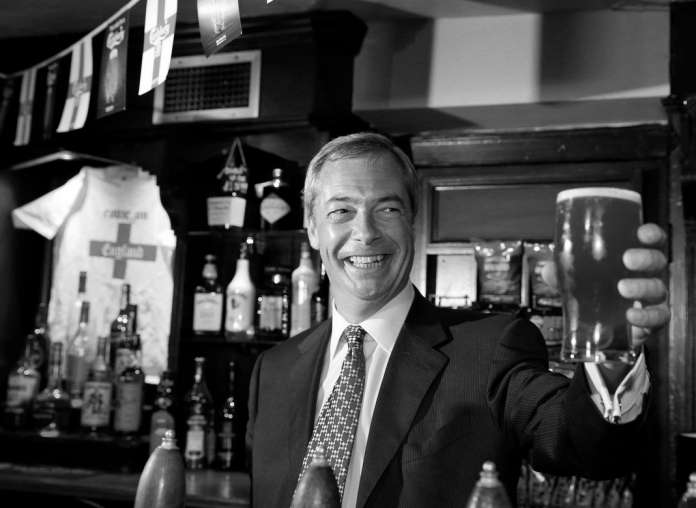 Jubilation and shock – these are the emotions that have overwhelmed me since I heard the BBC officially predict the result as the light broke through my bedroom window this morning. Feelings that I think that must be shared by all who have fought this long hard battle for our right to vote to leave a Union we never voted to join in the first place.

How many of us could have hoped the vote would go our way? So inured are we to being dominated by an out of touch political establishment, backed up by another elite – the arrogant BBC – I was resigned to more slings and arrows of outrageous fortune hurled in our direction.

But the political earthquake happened. The people of England and Wales did speak, once again and I am singing my own jubilate. “The new man sings a new song”,  St Augustine said.

For, as Burke observed in his ‘Reflections on the French Revolution’ (forgive my precis) it is, once more, the cumulative wisdom and culture of the people that counts. That is what led to the Civil War and the Glorious Revolution, the upshot of which was a secure civil society and the rule of law.

It happened this morning, again.

The French revolutionaries from 1790 onwards by contrast were wrong-headed. They rubbished and junked the traditions of the demos (and the rule of law). This of course is what, above all, the EU has been in the business of doing since its foundation – acting against the wisdom of the demos, and worse, replacing it with Marxist and technocratic claptrap – a destiny we have now thankfully escaped.

But I also have my own quite personal reasons for jubilation. I am beginning to feel vindicated and it has been a long time coming.

Seventeen years ago David Keighley and I realised that the BBC, on which the majority of the public rely for news and bestow their trust, needed taking on over its complacent EU coverage. We suspected it was failing in its duty to inform and to report criticism of the creeping EU superstate. We suspected it of bias – manifest, latent and by omission.

We approached a number of prominent Eurosceptics with the idea of independently monitoring this to hold the BBC to account. Only one, Malcolm Pearson, Lord Pearson of Rannoch, bit. I will never forget being called to his house in Westminster to make our pitch, entering his drawing room to find Janet Daley and Dan Hannan there – the panel waiting to judge us and it. Nor will I forget Lord Pearson’s immediate positive response as David closed his computer lid: ‘When can you start? In time for the European Elections (then two weeks away)?’

It was quite a moment for us. The rest is history. Lord Pearson, and his all-party organisation Global Britain, have backed News-watch’s BBC monitoring ever since to his great credit. Nor has this remarkable and principled man, ever left off his mission – despite the BBC’s year by year stonewalling and arrogance in response to his delivery to them of incontrovertible evidence of bias – programme by programme and word by word.

So today has not just proved an overdue defeat of an out of touch Westminster (the large majority of MPs voted Remain) but a defeat too of the still arrogant BBC, palpably shocked by the result this morning.

We were right and they were wrong. The evidence News-watch collected over the years showed exactly how the BBC treated Eurosceptism as marginal and suspect. It devoted hardly any time to covering even the most momentous developments, pushed debate towards the margins of the schedules and had a consistent ratio of 3:1 Europhile to Eurosceptic spokesman. And like Peter of the Gospels, it still denied bias. Its limited coverage continued to be out of sync with public opinion on the EU, which rated high among people’s concerns.

After the polls closed on 1 May 1999, Jeremy Paxman famously described the low turnout as ‘an outbreak of narcolepsy’.

But it was the BBC’s own boredom with debate about the EU that was responsible or public ignorance.

For the first time with this referendum, the BBC has been forced to give the subject extensive coverage. And what have the public done but engage and demand more information?  For the first time, default anti-Brexit bias aside, the BBC has been forced to open up the debate to them and to include opinions it has a record of disapproving of. The debate though the country has been bl**dy wonderful – except to those determined to impose consensus politics, who it frightened.

The ‘show’ debates proved to be ratings winners. In fact, the public could not get enough. The BBC was frightened out of its safe space. How mistaken they’d been, as Nigel Farage said, at the end of his interview today with John Humphrys, to treat them as fruitcakes and loons all those years ago. ‘I am sure we never did’, Mr Humphrys demurred. Oh yes they did and the proof is in News-watch’s transcripts.

But if BBC coverage over night and this morning’s reaction to the vote is anything to go by, it still does not approve of it and remains outrageously negative about Brexit.

Well they are on notice.

So too is the Vote Leave political elite (and I am not talking about Farage) who appeared to be struck dumb this morning by the scale of the vote. Their combined attacks on Mr Farage and Ukip – which followed later this morning yet again encouraged by an elite media – could prove another gross error of political judgment.

So far I have heard Liam Fox, who I have admired, saying we no longer need Ukip and it has done its job; I have listened to Tim Montgomerie,  who I have also admired, launch a vicious attack on Mr Farage’s ‘reactionary politics’ as a face of Brexit Britain that we don’t want, as a man who should really have no part in Brexit planning – his job done in delivering the referendum. Thanks very much.  Last but not least Boris Johnson could not wait to tell us: “we need to take the wind out of the sails of the extremists and those who play politics with immigration”. No guesses there as to whom he was referring.

I am sorry to end my jubilate on this note of caution. But these efforts to marginalise, minimise and further demonise Mr Farage as a racist will come back to bite them.

None of these worthies apparently either listened to or heard Diane James (of whom I hope we see much more) or the veteran Labour MP Kate Hoey. To be concerned about the rate of immigration across Europe, which has encouraged people traffickers and crime, about the effect of immigration on communities here and an infrastructure not equipped to cope with such sudden numbers, is not to be racist.

Our new Brexit elite could be hoist on their own petard if they refuse to hear this and manage to misread popular opinion as badly as the Remainers have.