NewsPaperthe art of publishing
Home News Karen Harradine: Israeli Arabs have a better life in Israel than in...
6

Karen Harradine: Israeli Arabs have a better life in Israel than in Gaza or the West Bank 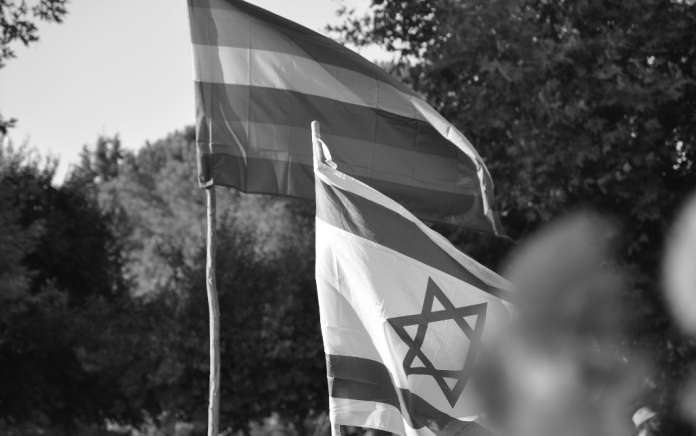 Last summer I went to Israel to visit family and friends.  Stepping off the plane at Ben Gurion airport I immediately felt a sense of safety, that I, as a Jew, had missed in the UK. Israel is a flourishing multicultural society. It exists as a sanctuary for a multitude of religions and races amidst the bloody and war-torn Middle East.

I did not go to the  beaches of Tel Aviv,where young Arab women in headscarfs sit chatting alongside Israeli men dressed in swimsuits and carrying Uzi’s. But I wandered around the awesome Baha’i World Centre in Haifa among bus-loads of Muslim tourists, who took photos of the beautiful gardens. I bought the best halva I have ever eaten from an Arab shopkeeper. While trying to pay him I clumsily knocked over his cup of coffee. As I blushed scarlet with embarrassment and apologised profusely he sang to me the words ‘don’t worry be happy’.

I listened to the elderly Kabbalist explain his ailments to the Arab pharmacist in the mystical town of Safed.   I ate hummus in a café at the German Colony in Haifa and watched the Arab chef, called Muhammed, sip tea with the waitress Yael on their break. I stood at the Kotel in Jerusalem, Judaism’s holiest site, surrounded by Ethiopian Jews and Haredi women. I experienced the craziness of Israeli taxi drivers yet again.

A visit to Israel will demolish the outrageous and slanderous lie that it is an Apartheid state. Israel is the only democracy in the Middle East. It has over eight million citizens, of which about 80 per cent are Jewish and 20 per cent are Arabs.  Both Arabic and Hebrew are official languages. Israel was recently ranked by the UN as the eleventh happiest county in the world).

Israel is home to over 40 per cent of the world’s 14 million Jews. Over three quarters of Jewish Israelis, known as ‘Sabras’ were born there. Almost half are descendants of North African and Middle Eastern Jews. Most Israeli Arabs are Sunni Muslims and the rest are Christians and Druze.

The Druze, who are culturally and linguisticly Arabic, have thrived in Israel. After many years of volunteering in the Israel Defence Force (IDF) they are now part of the conscription programme. Arab Israelis are not conscripted because of the possibly they might have to fight other Muslims, but a growing number are choosing to serve in the IDF to defend their country.

Over a quarter of a million Israeli citizens are non-Arab Christians, Baha’i, Circassians, Samaritans or the Christian German Beit El. The Baha’i, persecuted in Iran, have found sanctuary in Israel, where they are free to practice their religion.

All citizens of Israel have equal rights under the law, regardless of their religion, race, ethnicity, gender or sexual preferences. Muslims, as well as Jews, can be elected to serve in the Knesset.

No wonder that over half of Arabs living in East Jerusalem want to remain Israeli as opposed to becoming citizens under the corrupt Palestinian Authority (PA) or the genocidal Hamas. Around 4.5 million Palestinians live in the Palestinian territories of Gaza and the West Bank. The West Bank is governed by Fatah, part of the PA, and Gaza is run by Hamas.

Mahmoud Abbas, President of the PA, has held onto power for the past 11 years, refusing to hold any democratic elections lest he loses to Hamas. Under the corrupt PA dictatorship gay Palestinians are persecuted and some flee to seek asylum in Israel. The PA is also shameless in encouraging Palestinian children to wear suicide belts while marching in a parade to honour terrorists. Abbas’s recent incendiary racist comments against Jews led to Palestinian children doing the dirty work of the PA by trying to murder Israelis during the current stabbing intifada.

But the West Bank is a paradise in comparison to the hell-hole of Gaza, where Hamas rules with an iron fist. These ‘friends’ of Jeremy Corbyn use Gaza as their own private fiefdom as a base to destroy Israel and kill Jews. The Hamas Charter includes this murderous intent, as well as common anti-Semitic tropes.

Iran, Hezbollah and Saudi Arabia have all tried to control Hamas, with disastrous consequences for both Palestinians and Israelis. Gaza is further infested with other terrorist groups fighting and killing for power, like the previously Iranian backed Islamic Jihad and the Fatah subsidiary Al Aqsa Martyrs’ Brigades. These dangerous groups have now been joined by Isis, creating further chaos for the inhabitants of Gaza.

Hamas is not interested in governing their fellow Palestinians or making their lives better. When Israel withdrew from Gaza in 2005 it left behind good infrastructure and greenhouses used to grow food. These were quickly demolished by Hamas and what remains is a place where Palestinians are oppressed by their rulers and Jewish deaths are plotted and praised.

In 2006 Hamas won the Palestinian elections in Gaza. Part of their victory was achieved by throwing Fatah opponents off roof tops. No further elections have been held since then. So Gazan Palestinians continue to live under a brutal dictatorship. Millions of charitable donations have been poured into Gaza, including those from UNWRA, the UN agency employed solely for Palestinians. But thousands of Gazans live in poverty and despair because Hamas spends this money on armaments, like long range rockets called Fajir-5. Hamas is fond of launching these rockets from schools and hospitals. These are not the ‘home-made rockets’ that anti-Israel protesters bleat about. These are deadly machines that can and do kill.

Children in Gaza are also subject to indoctrination and abuse. Last summer thousands of Gazan teenagers attended a camp to learn how to become combatants, an outrage reminiscent of Isis. Hamas shows no remorse in exploiting Gazan children by making them dig terror tunnels into Egypt and Israel, as a way to bypass blockades. Over 160 children have died while digging these tunnels. Hamas’s deadly goals are far more important to them than the lives of Palestinian children.

Hamas, like the PA, also persecutes Palestinian LGBT people and likes to arrest journalists. Unlike in Israel, where it is a local hobby to criticise the government, free speech does not exist in Gaza. Women’s rights are ignored in Gaza, where there has been an increase in honour killings over the past two years.

Don’t get your information about Israel and the Palestinian Territories from the BBC and The Guardian. Instead go visit this interesting land and see why Israeli Arabs live a far better life in Israel than their Palestinian counterparts.  Israel is not only a sanctuary for us Jews, but for many other religion and races. Israel is the true epitome of a happy rainbow nation.