Jordan Holbrook: Marx and the campus are feminism’s recruiting sergeants 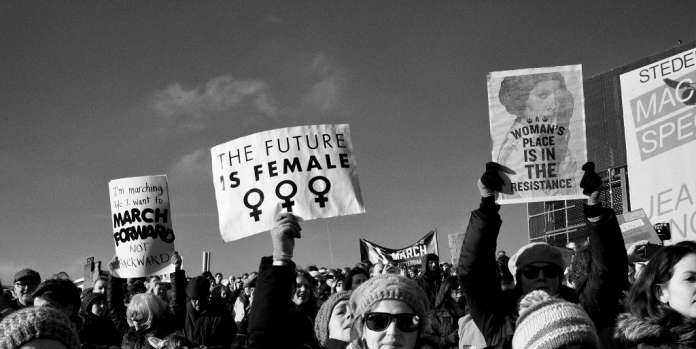 Any sensible person with even a modicum of intelligence would turn their nose up at feminist ideology yet, bizarrely, feminism is able to attract enough fresh blood to man the front lines and maintain a presence. How does feminism warp the minds of our young sisters and daughters? The feminist camp employs several recruitment techniques, all of which are just as insidious and invidious as each other, but the attracting of young recruits is predicated on two specific prerequisites.

Feminism can’t recruit any old person into their ranks. Instead, feminism requires a recruit to possess a certain dissociation from objective reality, to put it lightly. Take patriarchy theory, which describes “a system of social structures and practices in which men dominate, oppress and exploit women”. Such thinking, as with their rationale behind the pay gap, requires an external locus of control (and thus, an unhealthy amount of cognitive dissonance). Contrary to Kellyanne Conway’s view on the matter, feminism views and treats women as victims of their circumstances rather than products of their choices.

Not only does feminism require its followers to subscribe to an external locus of control, said locus needs to be correct. The new recruits need to view the world in the Marxist proletariat-bourgeois dichotomy. Whether they are aware of Marxist ideology or not is irrelevant, the recruit needs to be, at the very least, left-leaning. As Julie Bindel once said, then tweeted, “To be feminist you have to be on the political left or you are anti-equality and anti-working class”. If one does not meet these requirements, she is not accepted, ostracised. For example, Anna Rhodes was bullied by her socialist peers for being a Tory Feminist.

You know what women’s liberation doesn’t look like? A choice of two right-wing, anti-woman leaders who happen to be female. #ToryLeadership

If you’re a Tory feminist, just accept that you are oppressive, whether you think it or not. Stop trying to claim intersectionality pls

Essentially, feminism is Gender Marxism and, as Erin Pizzey commented, “It was never meant to be a movement for most women. It was an attempt by militant women in the Marxist movement to wrest power from men and to create a movement of their own. They simply moved the political goalposts and instead of capitalism being the enemy it was now patriarchy i.e. all men”. This simple bait-and-switch takes those who already view the world through the lens of haves and have-nots and replaces it with men and women, respectively. As Catherine MacKinnon put it, “Radical feminism-after this, feminism unmodified-is methodologically post-marxist”. So, all that needs to be done, as was done with the whole movement, is to target women who are left-leaning and push them over the edge. Converting those who are already on the left is but a hop, skip and a jump, which leads me to my next point.

Universities are hotbeds of lefty lunacy and liberal ideology, and TCW readers will require no convincing. But, just to solidify my point, I shall note a recent report by the Adam Smith Institute found less than 12 per cent of academics in universities support right-wing or conservative parties. With little opposition, universities are a goldmine for feminists searching for new recruits. Just like spreading manure fertilises a garden, promoting the growth of plants (and weeds alike), so too has the promulgation of lefty ideology at universities inspired growth in feminist (and other Marxist) thought. In fact, a survey for the Fawcett Society found those aged 18 – 24 were most likely to identify as feminist (15.9 per cent).

But, attempting to recruit new followers by appealing to university students who have been permeated with leftist teachings simply is not enough. No, they cannot just wait around hoping potential recruits fall their way instead, they must be out there pulling them in. As such, universities are now infested with feminist groups, societies, radios, etc.(with no groups representing the other side), all which act as recruitment vendors for the great engine of feminism.

The National Union of Students is unapologetically feminist, declaring feminism to be “back at the top of the agenda”. Margaret Millet details losing her sister Kate to Marxist-Feminism in the sixties thanks to university (and even losing herself, for a short while), saying “I went to the university and four years later walked out a communist and an atheist, just as my sister Katie had six years before me”. Our young head off to university not just for education, but for indoctrination also.

Simply put: the feminist movement takes young, impressionable, left-leaning women who are fresh into university, out discovering themselves, and it contorts their worldview, bastardising their original beliefs so as to fit the feminist narrative. Disgracefully indoctrinating our young for the cause, feminism has taken hold of the next generation. I can personally testify to this, having played party to witnessing such a pernicious tale of woe, I daresay many readers have too.

Jordan Holbrookhttps://www.conservativewoman.co.uk
Jordan is an MRA and writes on his blog "The Screen". He has a particular interest in men's issues and the damage caused by feminism.