Jill Kirby:The BBC dishes Ken up on a plate for naughty Nigel 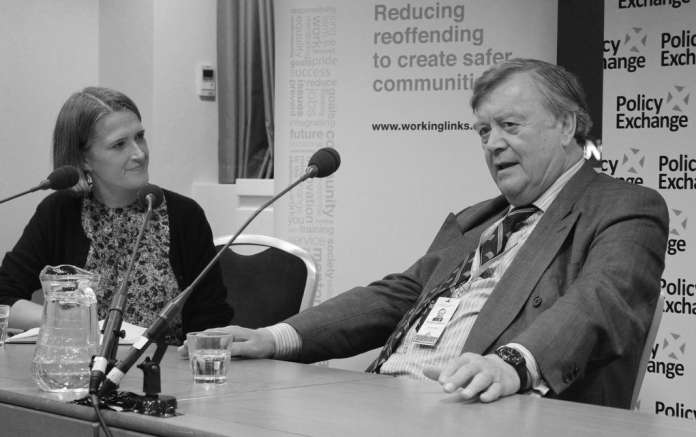 No wonder Naughty Nigel is still smiling, when politicians keep presenting him with gifts like Ken Clarke’s interview on this morning’s Today programme.

When Nigel Farage announced, after 24 hours of teasing, that he won’t personally stand in the upcoming Newark by-election, the Tories seemed to think it would be a good idea to field Ken Clarke to talk about it.

Presumably this was based on Ken’s much-vaunted bloke-ishness and ability to enjoy a cigar and a pint or two.

Sorry, chaps, but this didn’t work out too well, did it? Had you not considered the possibility that an unrepentant Europhile who still believes it would have been a good idea to sign up to the Euro might not be the best man to derail UKIP’s bandwagon?

Not only did Clarke demonstrate his total inability to understand why popular opinion in this country has turned against the EU, he also provided a pitch-perfect example of the out-of-touch Westminster politician.

Adopting his favourite lofty drawl, he dismissed the idea of non-politicians like Farage being able to deal with the serious business of running the country.

Has he not noticed – and did no-one at Conservative HQ think to point out – that one of the biggest reasons why people are supporting UKIP is the belief that politicians have messed up, and can’t be trusted?

Let’s spell this out: voters believe that establishment politicians across all the main parties are greedy and incompetent, and would like to give them a poke in the eye.

European and local elections look like a good opportunity for voters to get this message across to those currently in charge.

Confronting the anti-politics vote by saying that only politicians can run the show is a bit like saying the only people who can sort out the banks are the bankers who blew them up in the first place. Let’s face it, that’s not a good sell on the doorstep, is it?

Clarke is not alone in misunderstanding what is going on here. The BBC has assumed that making Farage and his party the butt of endless jibes, including a session of Have I Got News For You that would have had any Westminster politician squirming. But Farage just honked with laughter.

The Conservatives have tried a don’t-mention-the-war approach by attempting to ignore UKIP; then they tried taking a “strong line” on benefit tourism and immigration, only to be told by Europe that   they had to comply with European welfare and migration policies.

Now the Prime Minister has decided to act all decisive and set himself above the bickering, announcing that he’s not going to make any concessions to the Eurosceptics whatever the outcome of the Euro-elections. Good luck with that one.

What none of them seem to have grasped is that the anti-politics vote has given Euro-scepticism the boost it needed to move into the mainstream of voters’ concerns.

And the key reason why it will now stay in the mainstream is immigration.

The Coalition promised to end the open-borders policy of the Labour years, but has shown itself impotent to do so because of the EU.

And immigration is likely to remain a touchstone issue for voters across all demographics.

To urban voters it denotes overcrowded public services, no primary school places and a bewildering array of cultures.

To the shires it means building over the countryside to meet the demand for new homes.

Talk of Brussels overruling sovereignty never had much cut-through with voters. Not so the link between EU membership and mass migration, a link which UKIP has exploited relentlessly.

If the best the Conservatives can do, three weeks out from the elections, is send Ken Clarke out to bat for them, Naughty Nigel has an easy ride ahead.

Share
Facebook
Twitter
Pinterest
WhatsApp
Previous articleAmy Otto: Don’t mind the (wage) gap. It’s just that men and women differ over the work/life balance
Next articleKathy Gyngell: The BBC accused of right wing bias?  Now we have heard it all