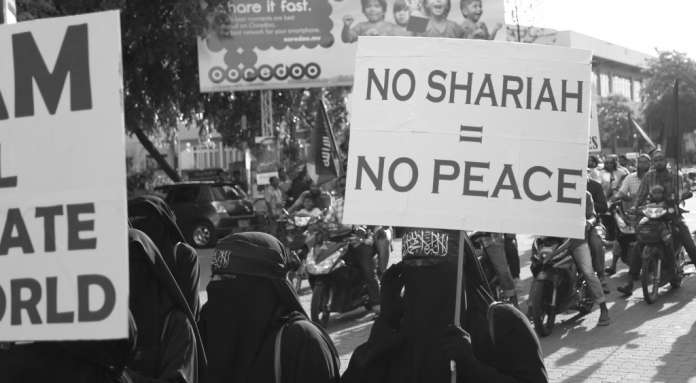 Even more amazing, she added that her heart ‘sank’ when she heard the latest case on TV news, with no mention of who or what the seventeen men from Newcastle were. The photos tell all, of course, but never the broadcaster.

Her words had never been uttered on Radio 4 or any part of the BBC before. It was stunning to hear those words spoken out loud. A mysterious consensus was drawn up some time ago which stipulated that racism cuts only one way. White people alone can be guilty of it and whatever ethnic minorities choose to do, they are by their very existence here victims. Ergo their ways, no matter how horrible, must be understood and accepted. Even expecting them to obey British law is unreasonable, and yes, probably racist.

As a result of this doublethink we live in a troubled, angry society where teachers, judges, bishops and charities tacitly approve of forced marriage, sexual abuse, slavery, acid attacks and animals killed without stunning. Our own laws are held in contempt, or are more likely unknown to certain immigrant groups hermetically sealed within their communities.

Like Ms Champion, vast portions of the public watch the news each night, also with hearts sinking, shouting out omitted facts at their screens. Following the MP’s unexpected outburst of truth, the BBC News at Six covered the court case against the men, not mentioning their ethnicity or the controversy caused by her words. By 10 pm the story had disappeared from their schedule altogether.

Sarah Champion said she knew she would be attacked for her stance, by the ‘floppy Left’ and the ‘extreme right.’ The flabby centre got her first as her words were immediately dismissed by the Government who said in a school-marmy way that no one should ‘jump to conclusions.’

She was then set upon by the NSPCC who denied that attacks on young white girls had anything to do with Asian men. Their view was not surprising; the charity, which purports to safeguard children, has systematically ignored all reports of cruelty to children in mosque schools even though secret film of beatings have been regularly posted on social media. They have ignored the plight of young girls being forced into marriage.

The Government has a ‘Forced Marriage Unit’ but there were still 1,428 cases reported in the UK last year, mostly in the Pakistani community, and the real number is likely to be much higher at between five and eight thousand. Convictions for this crime can be counted on one hand. As the school holidays and trips back to country of origin loom, there have been an increasing number of teenagers and young children ringing ‘Childline’ about their plight. Pakistani and Bangladeshi girls and boys with learning difficulties are most at risk.

The BBC colludes in this view and refers to those victims merely as ‘British’ refusing to mention their ethnicity, although of course everyone knows who they are. There was a BBC Newsnight discussion about the recent case, composed entirely of Muslim commentators, who were allowed to deny that the crime had any connection with them.

The NSPCC have been invisible on the matter of sexual trafficking and prostitution of young girls by foreign criminals. There has only been one prosecution for using children as slaves in this country. They have also managed to ignore FGM, bringing not a single prosecution despite three million cases being reported in all parts of the world, including the UK, every year, one every eleven seconds.

There is hardly any point in mentioning cruelty to animals in British slaughter houses. Even the most vociferous animal rights activist, now trying to pressure the Government as we leave the EU, will never mention Halal slaughtering.

For years, the highest and most charitable in the land have formed a cohort of the politically correct colluding in keeping paedophilia and other forms of sexual abuse and cruelty going by their wilful silence. The left-wing ideal of good ‘community relations’ and not offending migrant ‘victims’ far out trumps those concerns.

For a few moments Champion’s brave iconoclasm meant that, after so many years of silence about the persistent grooming of vulnerable white girls by Asian men, their behaviour was not only stated to be wrong but deemed a racist crime.

That idea even appeared as a newspaper headline in the Daily Telegraph, causing one reader to complain that it denigrated other Asian religions and secularists, making the point that this was not about Asian men per se, it was about Islam, which is not a race. That has yet to be explored by Champion or anyone else. To criticise Islam is probably a step too far even in this changed climate and would certainly bring Champion into disgrace.

But despite the NSPCC and the BBC, the idea that Muslims can be racist is now out there, the Muslim genie is out of the jar and cannot be easily put back.  On Saturday August 12th it was reported that Solicitor General, Robert Buckland, had said that ‘racism cuts all ways, and should be made more important in sexual abuse cases.’

Tory MPs rather than Ms Champion’s Labour colleagues, began calling for the Attorney General and Buckland to review the sentences on the seventeen Muslims convicted and apply a ‘sentencing uplift’, i.e. longer sentences if ‘racial hostility’ was their motivation.

Whether ‘race’ should be legally addressed in that way is open to debate, if we had such discussions, but what is important is that for once the Muslim community is not seen as above British law and if they commit serious crimes they can be taken to task and their cultural attitudes examined. That is a first.

Oblivious to this change in public mood, the BBC goes on with its self-imposed gagging. Their TV news quickly dropped the Newcastle grooming story in favour of one about another acid attack. That vicious practice has reached us, along with sex  trafficking and slavery, in the baggage of mass migration from the Indian subcontinent. But that is not discussed on TV any more than Pakistani racial/sexual attitudes.

We are still a long way off from Champion’s truth telling becoming the accepted norm. In place of research into these current evils, which she requested, we still have disingenuous questions from John Humphrys on Today and Evan Davies on Newsnight, who sometimes ask, ‘So, why is this happening?’ with no expectation of a truthful reply. In the absence of real analysis we will hve to go on with our usual national diet of suspicion, rumour and hostility, which is now intergenerational as well as between communities and classes.

I was reminded of this recently in a local community centre. A woman in her early twenties and I were looking at an extensive and laborious wall chart mapping incidences of the ‘harassment of local women.’ Each pin point on the map of the town had a piece of string leading to a written comment. The accusations were all about cat calling in the street. One said indignantly that a builder had shouted ‘Hello, Gorgeous,’ at her.

She felt she had been seriously violated. I thought the self-styled victim was being absurd and put up a little note pointing out that when she gets to my age man will not notice her or shout anything at all. The girl beside me took the side of the ‘injured’ note stickers.

‘Men calling out like that create the atmosphere where attacks are more likely,’ she said, repeating the current mantra of the young. For her silence is the most important weapon ensuring safety between the sexes and against any challenging ideas. We did agree that sexual assault had increased on public transport, particularly on the London Tube.

‘Can you be surprised, with so many men there from all parts of the globe,’ I replied. ‘Sometimes it seems hardly anyone else is using the tubes and they are increasingly packed.’

She looked shocked and I realised I had given voice to one of the forbidden opinions which can only be spoken at home behind locked doors and closed curtains. For her you cannot say what I had just said, whether it was true or not, it could not be said out loud, in case it offends someone or ‘creates the climate’ where bad, unspecified things can be done.

How many British people support that kind of thinking? Some of us older people, those hated as Brexiteers or worse, still like to think of our country as a place of plain speaking, hard drinking, dog loving people. It was a happy irony that Sarah Champion, despite being a socialist, has taken the first step to safeguarding them.