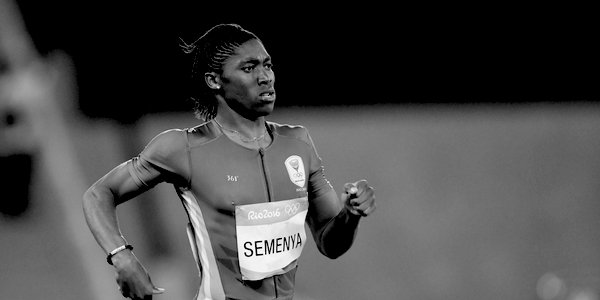 WELL, at least now it’s official. Women’s sport as we know it is on the way out. It used to be the case that the only qualification you needed to compete as a woman was to be a woman. In spite of what the gathering mob of gender identity ideologues would have us believe as they instruct us all on transphobia, gender fluidity and non-binary, most people are confident in their definition of what it is to be a man or a woman. It’s pretty biological. It doesn’t involve much work at the bench with test tubes and microscopes.

But what do silly old ordinary folk know? Even if they have heard of that whole XX and XY chromosome thing being connected to femaleness and maleness. Not much, it seems, as far as the Court of Arbitration for Sport (CAS) is concerned. In a landmark case, it has rejected the challenge by South African woman Caster Semenya against new rules brought in by the most important governing body in athletics, the International Association of Athletics Federations. The IAAF, presided over by Sebastian Coe, has ruled that Semenya can no longer compete as a woman in track events from 400m to the mile unless she restricts her naturally occurring hormone levels.

Semenya, aged 28 and Olympic 800m champion, has elevated levels of testosterone as a result of her condition of DSD (differences of sexual development) and will in future have to take medication to participate in her events. This means she has to reduce her testosterone levels in the same way that transwomen will be required to. So it’s all about the hormones then. No questions to be asked about the advantages conferred by the physical advantages of musculature in growing up as a boy. No, that’s all fine. No need even to bother having the surgery to change from a man to a woman. Just get your testosterone down in the same way that the too-fast woman Semenya will now have to.

That an organisation feels able to discriminate against a woman in this way is outrageous. It will have significant consequences for women competing in sport at the elite end. From now on, expect eyebrows to be raised if a young woman whose genetic giftedness means she has exceptional ability in sport starts to win too many medals. Expect further press coverage on suspicions regarding testosterone and pressure to submit to medication. It’s tantamount, is it not, to saying that a woman is just too darned good compared with the line-up: she is too strong, has too much stamina, she is too fast. In short, that she runs too much like a man. To which the only response is, so long as she is not artificially enhancing her potential, good for her.

Tennis icon Martina Navratilova has criticised the CAS verdict as ‘dreadfully unfair’, adding that it is ‘awful that she will now have to take drugs to be able to compete’. She is right. A more confused position, however, has been adopted by the women’s marathon world record holder, Paula Radcliffe. She has supported the IAAF’s new rules because she says it is the only way of stopping countries deliberately seeking out intersex athletes. At the same time as urging there is a need to ‘look at the bigger picture’, she acknowledges it is ‘not fair on [Semenya] and the other athletes’.

Well, here’s one for Paula. She has the perfect frame for the sport at which she has excelled, and that perfect frame (courtesy of genetic good luck, let’s be honest) combined with discipline and an undoubted capacity for extraordinarily punishing training has brought her fame and fortune. How would she have felt about being given some kind of handicap because of her genetic gift? How would she have felt about starting a good way back in Blackheath, just to level the playing field against bigger and heavier boned women who had worked just as hard, put in just as much blood, sweat and tears? Would that be ok? Would that be fair?

The fact is that you cannot level the playing field when it comes to sport. Heck, the unlevel field is what makes us want to watch it. The unlevel field is why there is a winner rather than everything always being a draw. Somebody has to be better than everyone else and that superior performance will be an unpickable interplay of genes and hard work. No athlete should ever be penalised for their natural gifts. Some in sport have towering height, long legs, great flexibility, heavy muscles, superior lung capacity, unusually low heart rates or exceptional hand-eye co-ordination. These things often benefit them in elite sport and there is nothing whatsoever we can or should want to do about this. That’s of course if we want to watch elite sport and boundaries being pushed by those with rare and extraordinary natural gifts. Who is anyone to say that Semenya’s naturally elevated testosterone levels are unacceptable when Radcliffe’s perfect slender shape for marathon running is not?

It is a pity that the Semenya case of DSD is being conflated somewhat with the transgender question. The femaleness of Semenya is not in doubt the way some would argue that a transwoman’s is. It may be that the only way ahead is for there to be a new third category for elite trans athletes to compete against each other. After all, in what we are constantly being told are non-binary times, why should sport just be divided into men’s and women’s? That third category is not for Semenya though. She has not done any transitioning. She has done nothing artificial with her body. That she is not being allowed to compete as a woman unless she restricts the natural genetic gift of her testosterone levels is a violation of her human rights.