Hell exists and its name is Putin’s Russia 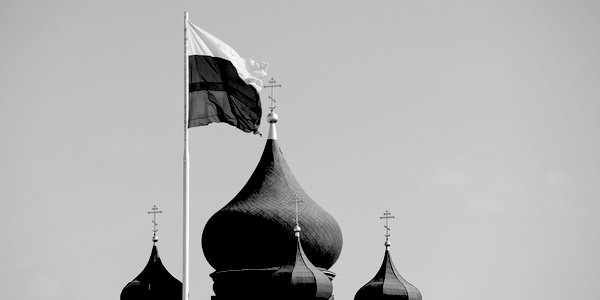 The film ends with a woman in a glass penthouse lumbering away on an exercise machine, slowly going nowhere. Her face as expressionless as a Greek statue. It begins with her twelve-year old son walking through a frozen landscape, watched closely by someone we cannot see. ‘An Arctic front is approaching’ warns a voice from a radio and from beginning to end a sense of threat is imminent.

Loveless is a template for modern Russia cut from events surrounding the boy Alexey and his parents, who live on an urban housing estate, somewhere near Moscow. The adults seem roughly equivalent to our ‘Yuppies’ in the 1980s. Zhenya, the Greek goddess, and Boris her passive husband, who’s become an evangelical Christian, are a middle-class couple going through a vicious divorce. They’ve already started new lives with different partners, both impatient to ‘move on’.

We see Zhenya showing potential buyers around their flat. That uncomfortable process is made more tense because Alexey doesn’t co-operate; he’s resentful of his parents who are totally preoccupied and self-absorbed. They in turn ignore him. After the buyers have gone the couple discuss who will take him after their divorce.

‘I’m moving on too, haven’t you heard of equal rights?’ says Zhenya. Boris doesn’t want him because he has a pregnant girlfriend and a censorious Christian boss who mustn’t find out he is leaving his marriage. Unfortunately, Alexey overhears. The boy’s face is revealed to us, but not to them, in a silent scream. One of the most pitiful images imaginable. This is child cruelty middle-class style. These post-Soviet Russians have everything material available to them, but seem neglectful, narcissistic and loveless.

It takes his parents two days to realise that Alexey has vanished. They’re both too busy having energetic sex with their new partners. They try to find him but continually express regret that he was ever born and are obviously almost glad that he’s gone.

‘I’ve never loved anyone,’ Zhenya tells her lover. ‘Only my mum when I was little and she’s such an idiot.’

After Alexey disappears we are into an unravelling story of nihilism, amorality and spiritual death.

Can this really be what life is like in Putin’s Russia for its 144million inhabitants? Probably no one would be able to say, certainly not most Russians. British teachers who work there say how wonderful the students are, exiled dissidents complain about compliance and lack of any democratic sense. Very few people report on life in the Russian countryside, which remains as mysterious as it was under communism, when large areas were off the map to foreigners.

The director, Andrei Zvyagintsev, in his raw exploration of Russian life, gives a glimpse of it as the couple visit her mother, whom Boris calls ‘Stalin in a skirt.’ She lives a two-hour drive away in a derelict house boarded up against thieves. They go there, not because they want to visit her for comfort; quite the opposite, mother and daughter cannot tolerate each other.

After the police offer no help to find the boy, a group of search and rescue volunteers suggest that he might have taken refuge with his grandmother. They obviously have no idea what the modern Russian grandmother is like.

In a bravura performance by Natalya Potopova, a loveless old woman, (she is 65 but looks 85) keeps losing her mobile, pours out her desperate bitterness and rage against her daughter for getting pregnant, refusing an abortion and marrying a man she calls ‘that damn prick of yours’.

She rails at her daughter, ‘You plan to stick me with your spawn. It’s never going to happen.’

As they drive away, Zhenya asks Boris: ‘How did all that talk of love lead to bitterness and disappointment?’

She could be speaking about her homeland and its last century of torture and failure. Zvyagintsev bravely holds up a mirror to corruption and the harshness of life in his homeland, and you wonder how he gets away with it, when so many opposition journalists have been murdered.

His early films, such as The Return in 2003, didn’t touch on modern-day realities, so they were supported by the Ministry of Culture. Then in 2011 he made Elena, set in contemporary Moscow.

‘The problem is the mirror,’ he told The Guardian last year. ‘The people in power look into the mirror and do not like what they see. But it is just my point of view, my perception of reality. I could be wrong.’

Leviathan (2014) was the tale of a small-town mechanic crushed by the bureaucratic machine. The film ended with fascist rhetoric inside an Orthodox church and a portrait of Putin inside a corrupt mayor’s office. The authorities abruptly withdrew financial support. The nationalist politician Vladimir Zhironovsky described it as ‘filth’ while a prominent church group accused it of ‘odious slander’. The Ministry of Culture also drew up a new set of guidelines targeting films which ‘defile’ Russia. Zvyagintsev, originally from Siberia, was out in the cold. Loveless had to be made with money from France, Belgium and Germany.

‘I’m outside the system. My producer finds the money,’ Zvyagintsev says defiantly. His subject is a broken system, a lawless land. His films tell us that hell exists and its name is Putin’s Russia.

He wants to continue making films in the homeland and dreads having to adapt to a new language and culture. He feels he should be allowed to remain where he is. Let’s hope he can do that, as he is providing the rest of us with a vital service, giving us a unique window on a vast land we cannot understand.