NewsPaperthe art of publishing
Home COVID-19 Has social distancing made much difference after all?
0

Has social distancing made much difference after all? 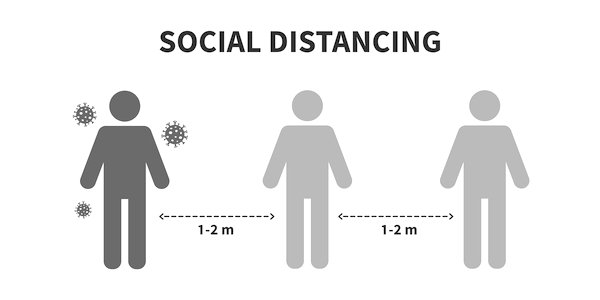 DOES social distancing stop a Covid-19 epidemic? It seems pretty obvious to most people that the answer is yes, and many experts including those sceptical of lockdowns see voluntary social distancing as the real key to bringing outbreaks under control and preventing a deadly second wave (see for example here and here).

The difficulty in testing this claim is that everywhere has done social distancing, including Sweden, so there is nowhere we can look at to see what happens to an outbreak without it.

What we can do, though, is look more closely at whether social distancing always curbs infections in the way we would expect. Consider for example London. Deaths in the capital peaked on April 8, having begun to plateau on March 27. Assuming an average of 16 days from infection to death (this figure used to be 21 days but has recently been revised as understanding of the virus has grown), that puts peak infections on March 23 and the beginning of plateau on March 11. If we look at the graph below, which shows use of mass transport in London, Manchester and Birmingham in March, we can see that the plateauing of infections from March 11 coincides closely with the drop in use of public transport and hence the adoption of social distancing.

Deaths in the North West of England don’t begin to plateau until  April 3 and then grew only slowly to a peak on April 16 before beginning to drop. This puts the beginning of the plateauing of infections on March 18, when social distancing has already been going on for five days and public transport is running at under 40 per cent normal use. Prior to that, while transport use is plummeting, infections are growing exponentially,and they even carry on growing (albeit at a slower rate) until a peak on March 31, a whole week after lockdown has begun.

Why is that, when in London the drop in public transport use coincided with the plateauing and peaking of infections? Why is social distancing affecting the infection curve so differently in London and Manchester?

If social distancing was truly responsible for ending epidemics then we would expect it to do so everywhere. The fact that in Manchester and the North West the region saw exponential growth in infections while it was busy socially distancing, and continued growth in infections while in lockdown, suggests that even social distancing may have little – or less than has been thought – impact on the spread of the virus.

That’s certainly the view of Nobel laureate Professor Michael Levitt, who points out that in every country a similar mathematical pattern is observable regardless of government interventions and public responses, so that after around a two-week exponential growth of cases, some kind of brake kicks in that curbs growth.

The same idea has been backed up by a new model by a team at the Liverpool School of Tropical Medicine which suggests that collective immunity can be achieved at as low as 10-20 per cent infection rate, owing to the existence of prior immunity in the population and other factors that affect susceptibility. It is further corroborated by a statewide antibody survey in New York in late April, when the epidemic there was over, which (with final results now in) has found 12.3 per cent with antibodies, including 19.9 per cent in New York City itself.

This all needs further investigation and continued close examination. But if the evidence from Manchester is anything to go by, it may not be social distancing that stops the virus but nature, as the epidemic runs its course. This would make fears of a second wave unfounded, and continued social distancing a harmful and costly waste of time and would reassure the public they need not wrap themselves in cellophane for ever.