Give the PC Brigade its marching orders, sir 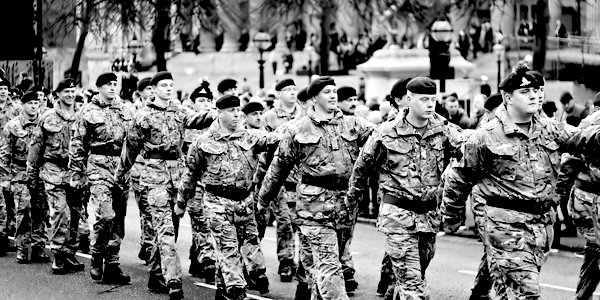 I am sure that you will sleep more soundly in the knowledge that what is left of our armed forces has a Joint Equality, Diversion and Inclusion unit. Vlad, Fat Boy Kim and other potential enemies must quake at the thought that, notwithstanding equipment challenges including having only a handful of obsolescent tanks, aircraft carriers with no aircraft, Type 45 Destroyers with engine problems and a major recruiting shortfall, the British Armed forces are politically correct. We have the JEDI and the force is with us.

This fantastic capability has been highlighted in the British Army’s Soldier magazine. The Telegraph reports that a soldier wrote in asking why he was required to answer the phone with a greeting which ended: ‘How may I help you, sir?’ mischievously making the point that the presumption that the caller was male might cause offence. He went on to question whether calling officers ‘Sir’ or ‘Ma’am’ (rhymed with ham) might also reinforce stereotypes, and should therefore be abandoned.

The trivial case of answering the phone is actually a problem faced and solved by every business telephone user. ‘How may I help you?’ is a sufficient end to the initial greeting, which is what the Army’s Deputy Head of Employment advocated in his response. He also, rightly, made the point that addressing officers as Sir or Ma’am is necessary and will continue. If the soldier had been ordered to assume everyone was a ‘Sir’ not a ‘Ma’am’ then the person giving that order was an idiot – there are plenty of them in every walk of life. No big deal. Storm in teacup. Demonstration that common sense isn’t.

On the wider issue, officers hold the Queen’s Commission (and warrant officers, e.g. Sergeant Majors, hold the Queen’s Warrant). With those appointments comes significant power and responsibility, and this needs reinforcing constantly. Saluting commissioned officers is part of this reinforcement process, as is the use of ‘Sir’ or ‘Ma’am’ to all officers. This is common practice in almost all armies. In the British Army it is, inevitably, also a way for soldiers to express their feelings: it is possible to say Sir/Ma’am in a manner that drips with contempt – perfected by the Colour Sergeant instructors at the officer training academy at Sandhurst.

Indeed, when I served as an officer in an armoured regiment and therefore as part of a tank crew, living in very close proximity with my Welsh soldiers for protracted periods, ‘Sir’ was a term of reproach – ‘Boss’ was what one was called when one was doing well, and it probably still is (in combat arms at least).

For sure there is an element of mischievous coverage in this; the Telegraph’s headline (Stop addressing officers as ‘sir’ on the phone, soldiers told as greeting is ‘outdated’ and risks offending people) is shamefully misleading. However it is the case that the Army, by the very nature of its fundamental role (defending the realm by all lawful military means – which includes disembowelling Her Majesty’s enemies with a bayonet), is not politically correct. Given the pre-eminence of PC within today’s governments, this probably means that the cultural gap between the Armed Forces and Westminster is wider than is healthy. We risk returning to the Lloyd George Brass Hats versus Frock Coats battles, which were decidedly not in the national interest.
To that extent I am impressed and delighted that our new Secretary of State for Defence, Gavin Williamson, prevented the Army’s current recruitment slogan ‘Be the Best’ from being abandoned on the PC grounds that it might offend to anyone who, in Samuel Johnson’s words, ‘thinks meanly of himself for not having been a soldier, or not having been at sea’. If Gavin Williamson has the balls to take on the PC lobby and win, as well as injecting some backbone into the brass hats, he could well be one to watch. More power to his elbow.