NewsPaperthe art of publishing
Home News From the Guardian, a toxic anti-Semitic smear against Farage
0

From the Guardian, a toxic anti-Semitic smear against Farage 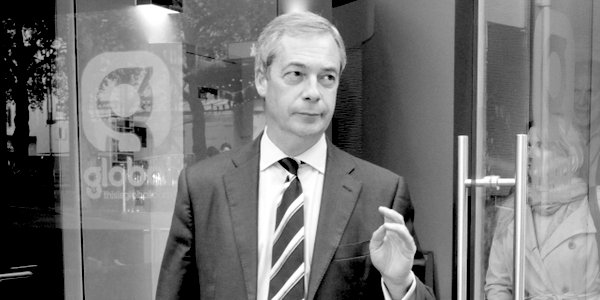 ON Sunday I read the Guardian’s latest hit job on Nigel Farage with astonishment. Headed ‘Jewish Groups and MPs condemn Nigel Farage over antisemitic “dog whistles”’,  it all but smeared him as an anti-Semite.

As a long-term challenger of anti-Semitism, I know its flavour and smell. Farage neither tastes nor smells anti-Semitic. In fact, I would like to put it on the record that I have never had any reason to think of Farage as anti-Semitic.

The report looked to me therefore suspiciously like manufactured outrage by the Guardian, a paper not exactly known for its support of Jews. And, line by line, that is what I found. Here is my detailed response:

First, the article’s focus on quotes from selected Jewish organisations and MPs, which came across as an attempt to legitimise this condemnation of Farage.

It starts with one from the Board of Deputies of British Jews, which is reported as saying: ‘Farage’s airing of claims about plots to undermine national governments, and his references to Goldman Sachs and the financier George Soros, showed he was seeking to trade in dog whistles.’

I will return to the validity of this allegation, but first let’s look at the context. The Board of Deputies is crippled and compromised by a feeble leadership. It’s overwhelmed by anti-Israel deputies and Labour sympathisers.

It has also been extraordinarily weak in its response to anti-Semitism on the Left and shamefully slow to condemn Jeremy Corbyn and his failure to rout out anti-Semitism from the Labour Party.

Then there is the question of the board’s pro-Remain stance on Brexit – making Farage a particular anathema to its members – and the failure of deputies yet to criticise the EU’s detrimental anti-Israel policies. It is hard to take them seriously.

The CST (Community Security Trust), another Jewish organisation the Guardian cites, appears similarly out of touch with the many Jews deeply troubled by anti-Semitism on the Left. It was not Farage’s Brexit Party we feared winning the December general election, but Corbyn’s Labour.

Of course, there will always be Tories ready to attack Farage at any given opportunity. After all, he is their bête noire. But has Andrew Percy, chairman of the all-parliamentary group on anti-Semitism, and so quick to castigate Farage, yet commented on the rank anti-Semitism at the core of Black Lives Matter (BLM)?

If this group wants to keep its integrity, I suggest it cease the Farage-bashing and look to where the real threats to Jews lie.

The sentence casting Farage’s comments on cultural Marxism – described by the reporter ‘as a term originating in a conspiracy theory based on a supposed plot against national governments and which is closely linked to the far Right and antisemitism’ – as anti-Semitic is perhaps the most bizarre allegation of all.

True, on the Left, cultural Marxism has long been labelled a demented conspiracy theory. But, as Melanie Philips explained last year, it’s only the real far-Right fruitcakes who co-opt the term as a euphemism for Jews.

Its roots actually lie in a political philosophy propounded by far-Left thinkers known as the ‘Frankfurt School’, along with other Marxist theorists such as Antonio Gramsci, Herbert Marcuse and Saul Alinksy. It was Gramsci – who was not Jewish – who built the central tenet of cultural Marxism around the idea that revolutionary consciousness must be cultivated. He also developed the concept of cultural hegemony – the wielding of mass culture to control the masses. Some cultural Marxists, such as the academic Edward Said, are also virulently anti-Israel.

Why is the Guardian parroting a far-Right narrative on cultural Marxism, rather than that taught in British and European universities? It is simply bemusing. Context is everything and there is nothing anti-Semitic in the Farage interview featured in Breitbart that’s referred to. There is nothing in his mention of cultural Marxism in this context that denigrates George Soros as Jewish, or involves an anti-Semitic trope.

As well as being misleading, the Guardian appears deliberately disingenuous, begging the question of whether any of its ready ‘rent-a-quotes’ or the reporter either read or understood what Farage wrote? I did.

Take where Farage is accused of picking on Goldman Sachs in one of his Newsweek pieces. Not only is the paragraph incorrectly referenced, the reporter also neglects to mention that Farage refers to Goldman Sachs in a very specific context, not in a generalised one:

The EU is not a functioning democracy that best serves individuals or their nation-states. It will never command true authority over nation-states. In fact, the only people it truly serves is the billionaire class. There are numerous reports of Goldman Sachs executives suggesting changes to EU policy and former European Commission President José Manuel Barroso and his team actually listening to them – behind closed doors, of course.

Nor is there anything incorrect about Farage’s criticism of BLM and Antifa in his Newsweek article. Nor is he alone pilloried for speaking out. Calling out anti-Semitism in the BLM protests has ‘invited spitting derision’ on Zoe Strimpel too.

For all the cries of ‘anti-Semite’ being lobbed at him, Farage is doing Jews a favour by showing up BLM for what they are – anti-Semitic neo-Marxists. Those who are so quick to lambast Farage, yet bend the knee to BLM, really need to give their heads a shake.

Farage is also right to point out that Soros’s Open Society Foundations fund many destructive organisations, including anti-Israel ones.

It is perfectly legitimate to criticise Soros. It is the moment when any criticism contains derogatory references to Soros being Jewish or employs tropes such as Jews controlling the world, that it strays into anti-Semitic territory.

Farage has not done this. He has said nothing about Soros being Jewish and has only stated the facts. Must he avoid stating facts in case he is accused of dog-whistle politics by the Left? We can’t judge someone on what we think they might mean, but only on their actual words. Unfortunately the Guardian is doing the former when it comes to Farage.

My only criticism of Farage is that he should never have let himself be interviewed by Alex Jones, a well-known purveyor of anti-Semitic conspiracy theories. This was a bad lapse in judgment.

The Guardian article otherwise is pernicious hyperbole. Jewish organisations really shouldn’t play along. This manufactured smear against Farage diminishes the concept of anti-Semitism and distracts from the all too real anti-Semitism continually festering on the Left and its new playmates, BLM.

I’d feel in safer company with Farage than with Guardianista writers who are so blind to the toxic anti-Semitism around them. He will always have my gratitude for leading Britain out of the anti-Israel EU.