NewsPaperthe art of publishing
Home News Everyday heroes: The men of war who gave us peace
0

Everyday heroes: The men of war who gave us peace 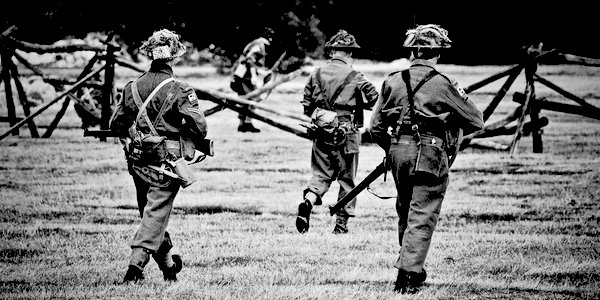 THE men my generation most admired were the heroes of the Second World War. Courageous and daring, they had fought the good fight against a relentless foe and won.

As children, we read about these warriors in newspapers, magazines and comics. We thrilled to their exploits in films and, later, on television.

Among them were Guy Gibson of the Dambusters, the legless fighter ace Douglas Bader and the Colditz escaper Airey Neave. There were many more who had served valiantly on land, sea and in the air and who became household names.

But in those early post-war years, there was also a legion of unsung heroes, living in plain sight among us. They were the thousands of ordinary working men who had answered the call to arms, serving their country selflessly, but without attaining high honours.

After being demobbed, they returned in their hundreds of thousands to the anonymity and obscurity of Civvy Street, to the daily grind of office, shop and factory. Yet, in Chesterton’s phrase, they also had their hour. They had played their part in the victory.

Men such as my father, who landed in Normandy on D-Day in June 1944, was later wounded, then returned to serve through until VE Day. Like many old soldiers, he rarely spoke of his wartime experiences, but he carried bits of shrapnel in his back for the rest of his life.

Then there was his old pal, Arthur. I remember him as stout and ungainly. In September 1944 he was among the Airborne troops who dropped into Holland during Operation Market Garden, fighting doggedly but in vain to reach the British paratroopers holding Arnhem Bridge.

I once saw a man limping along and learned that he had been a sailor, serving on the nightmarish Arctic convoys to Russia. During a storm, his leg became frozen to the deck of his ship and had to be amputated.

Another friend of my father had been a prisoner of the Japanese on the Burma Railway. Even years after his liberation, you could see the grim legacy of his ordeal in his spare frame and the haunted look in his eyes.

One of my uncles was a submariner. When his vessel was attacked and sunk, he survived after spending many days adrift at sea. Another uncle saw action with the Royal Marines.

I know many families have similar stories and, as I do, they cherish them as part of their heritage.

Significantly perhaps, despite all that these men had done, or endured, not one of them would have counted himself a hero. They saw it as just doing their duty.

But heroes they certainly were. Had the war turned out differently, had men like them not fought to liberate Europe, the result may have been a lasting Nazi hegemony.

Once back home, they faced another battle – the struggle to make a living and feed their families. Although the Welfare State was established, life was just as hard for many as it had been before the war. Economic recovery was often sporadic, with unemployment a constant spectre, especially for the unskilled.

Although women had magnificently taken over in the fields and factories during the war, men returned to doing the dirty, dangerous jobs. My father ended up as a labourer digging roads – hard, backbreaking work for little pay.

In the heavy-lifting industries such as steel, coal and shipbuilding, injury and even death were always a possibility. Even today, men are 23 times more likely to die in the workplace than women.

This is not to downplay the role of women in the war or in the peace. Thousands served in the Forces and in medical services. Some helped break the German codes at Bletchley Park, others became secret agents in enemy-occupied territory. On a humbler scale, my mother made parachutes and barrage balloons. During the Blitz, my grandmother swept an incendiary bomb off her doorstep with a coal shovel. It is just that the greatest burden of the war naturally fell on men.

The price paid by all in those turbulent years emphasised how the generations that came after the war, mine especially, reaped the benefits of the peace without having to make any of the sacrifices that had won it. We should thank God for that. Whether we won the war then lost the peace is another story.

So, as the 75th anniversary of VE Day approaches, let us honour all those men who died or survived, the famous and the forgotten, hail their manhood and courage, and salute their victory.