Dr Campbell Campbell-Jack: Trump has got the progressive Left literally foaming at the mouth 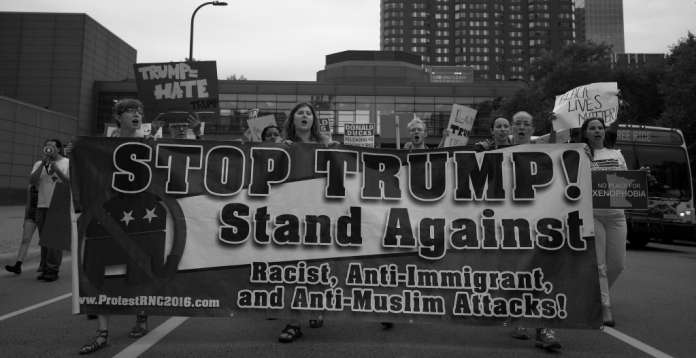 Never seen a chimpanzee having a fit? Don’t worry, you won’t have to torture innocent primates. You need only observe the mainstream media and political elites react to Donald Trump’s temporary restriction on travel, while robust vetting procedures are put into place, from seven Middle East countries well stocked with jihadists who wish to kill Americans. . In the meantime, he has authorised the establishment of safe zones in countries such as Syria, so that genuine refugees can be protected close to home.

Obama banned immigration from Iraq for six months in order to review screening; the progressive hordes were silent. Trump temporarily bans immigration from seven nations, previously identified by the Obama administration as sources of terror, to review screening for three months and the media goes into meltdown resulting in airports being filled with howling protesters and cities across the world being inundated with the self-righteous.

Andrew Cuomo, the Democratic Governor of New York State and clearly a man with a somewhat debonair attitude toward logic, responded to Trump. Cuomo announced that New York ‘has no tolerance for intolerance’. He then went on to self-define, ‘As a New Yorker I am Muslim, I am Jewish, I am black and gay, I am a woman seeking to control her health and choices’. In actual fact Cuomo is a wealthy middle-aged Italian-American man with an interestingly rich fantasy life.

According to a tearful Chuck Schumer, senior Democratic Senator from New York, (also the minority leader in the Senate) and Nancy Pelosi, Democratic Minority Leader in the House of Representatives, tears were running down the cheeks of the Statue of Liberty.

The hysteria was not confined to the USA. It infected large swathes of the well-meaning middle class concerned who had skipped their medication before going out for the evening. Cities throughout the West had the experience of being brought to a halt because the President of the USA had the audacity to have a plan to protect the citizens of the USA from harm.

Shadow Business Secretary Clive Lewis was not slow to jump on the bandwagon and try to employ Trump Derangement Syndrome as a means of resurrecting a moribund and disabled Labour Party. Lewis lectured Theresa May, ’The EU referendum result did not give you a mandate to sell out on our British values. Did not give you permission to sell our NHS to Donald Trump and his corporate cronies. Did not give you permission to rip us away from our brothers and sisters in Europe and into the arms of Trump’s America.’ We can be sure that this has nothing to do with the fact that there are a couple of difficult by-elections coming up for Labour.

Former Foreign Office permanent secretary Lord Ricketts is suddenly concerned that the Queen, who has been forced to meet and greet on our behalf real dictators, like Mugabe and Ceausescu, is going to be embarrassed at meeting a brash billionaire from New York.

At a lower level but just as devoid of historical context, Assad Khan of Edinburgh University’s Islamic Society, said: ‘This campaign of dehumanisation has to stop; of women, of Muslims, of the LGBT community, of disabled people, of all minority groups. It has to stop.’ The recorded fact that Trump has a much longer record of supporting the LGBT etc ‘community’ than either Obama his predecessor or Clinton his election opponent seems to have escaped Mr Khan.

Whatever their background it is quite apparent that progressives have no concept of hyperbole. Labour MP Louise Haigh described Trump as ‘a racist misogynist on cusp of destroying the world’. You have been warned. The book of Revelation is about to go full bore because Trump has been elected.

Home Secretary Amber Rudd used a commonly deployed argument against Trump’s executive order. This claims that a move to protect the USA from Islamic terrorism will embolden America’s enemies and provide a recruiting tool for ISIS

Does anyone actually believe that ISIS, al-Quaida and their many off-shoots are going to become more violent? They already behead, crucify, burn alive, take sex slaves and bring death and destruction wherever they go. What do they have to do to be more violent? Perhaps they could get angry enough to start suicide bombing.

The logic of Rudd’s recruiting argument is that ‘Islam is a religion of peace, but if you do something which annoys Muslims they will turn incredibly violent, because after all that is what Muslims are like’. To most of us this would seem to be more than somewhat Islamophobic, but nevertheless a pretty good argument for keeping Muslims out if they are so unstable. But then people rarely accuse Amber Rudd of being a deep thinker.

No one is ever going to be so OTT as to suggest that rational thought is a progressive forte. The election of Donald Trump has given them an opportunity to go full bore guano crazy.