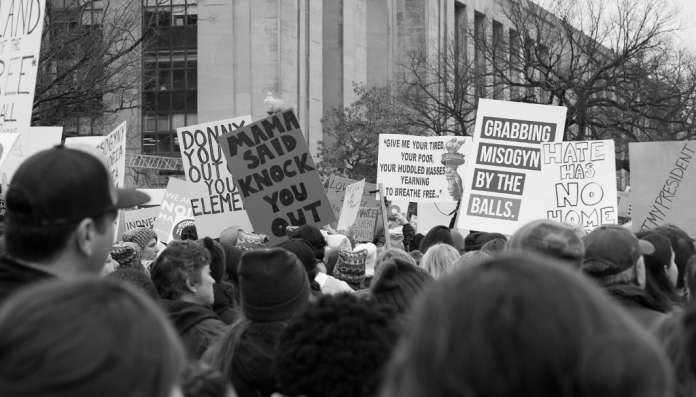 TDS or Trump Derangement Syndrome is only going to get worse; there is an entire industry invested in opposing him. Listen to the media whipping up opposition and one would think that the first week of his presidency has been nothing but the establishment of a fascist empire. The man had the audacity to implement the promises he made during the election. It’s only going to get worse.

TDS is similar to the previous outbreak of BDS, Brexit Derangement Syndrome. In sufferers from BDS, namely the media, politicians, economists and opinion formers everywhere, Brexit meant that the sky was going to fall. Britain was going to be reduced to the status of a street waif in a Third World city holding out a begging bowl beseeching alms from well-heeled German and French passers-by. Despite the facts, variations of this keep popping up. We are regularly assured that, ‘It’s just a matter of time before the full impact of Brexit is felt. The sky really is going to fall, honest’.

This is not wilful. The MSM, existing in a self-regarding bubble, fails to grasp reality. Those who are paid to look at the world and inform us of events are genuinely unable to look beyond themselves. Supposed to present the news in an unbiased manner what they produce is shaped by unacknowledged ideological priorities and confirmation bias. This isn’t the deliberate dissemination of ‘fake news’; it is much worse; it is shaped by genuinely, deeply held opinion.

When Times columnist India Knight tweets that she is longing for the assassination of Trump she is merely reducing the level of filter journalists normally use. This is what she, and probably many of her colleagues, genuinely feel. They exist in a social environment where the distance between progressive opinion and political activism has shrunk, and it shows.

When an expert shows up who doesn’t have the correct progressive credentials the journalist is automatically suspicious. Experts from Greenpeace or Friends of the Earth are accorded credence, while a scientist who is a climate ‘denier’ is held at arm’s length. This is not necessarily lazy journalism, although with the BBC it is settled policy.

Thus while print media sales plummet, people turn in increasing numbers to what is termed alt-media, news and opinion sources outwith the mainstream media. This is not because the alt-media is free from its own presuppositions. The big difference between mainstream and alt-medias is that the alt-media is open about its presuppositions. If you are surprised when clicking on to TCW by finding it presents articles from a socially conservative viewpoint, then you don’t deserve to be let loose with a baby’s rattle, never mind a computer.

A significant effect of BDS and TDS is an increase in polarisation. Self-regarding celebrities use their bully pulpit to preach opposition to the man who won a fair election. This may please their friends in Hollywood and cause them to be lionised in the media, but it is a turn off for many fans. Ageing singers stream expletives and actresses have distressing breakdowns before a crowd of adoring ‘wimmin’ carrying foul placards in front of their children. Those already committed cheer them, and the rest of us are even more confirmed in our opposition.

Trump is no social or political conservative. He supported same sex marriage years before Obama or Hillary Clinton ‘evolved’ on the issue. He is anti-free trade and pro compulsory purchase, which he thinks is ‘wonderful’. He is opposed to examining and rationalising America’s social security system and has promised to ‘protect’ it. To too many problems Trump’s answer is governmental interference.

Trump is an ideology-free zone who will do what he thinks best for the USA and Donald Trump. He is a big government conservative as long as he is the one calling the shots. Yet such is the organised opposition to him that actual social conservatives can feel pushed into his arms because the alternative is so ghastly.

That progressives wear blinkers is no reason for conservatives to choose selective blindness. Theresa May deserves support and encouragement when she upholds conservative values, and opposition when she allows herself to be stampeded by progressive opinion. Despite the sometimes unhinged opposition faced by Donald Trump, we should support him when he does something right, and not shy away from calling him out when he gets it wrong.