Dr Campbell Campbell-Jack: The Left exploits Newspeak to erode the foundations of the West 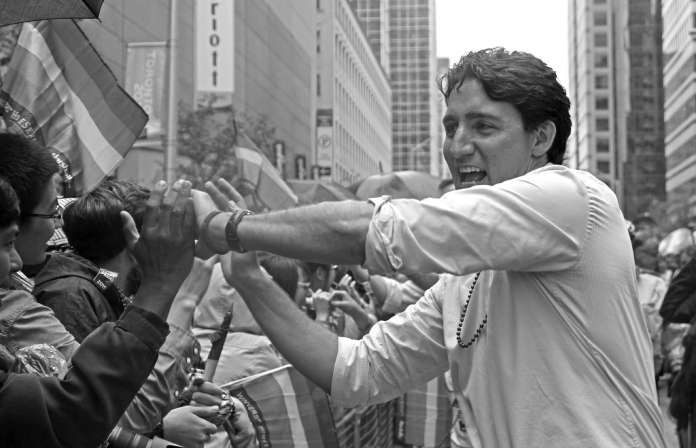 Fantasy will never ultimately prevail against reality, but it will have a jolly good try. In the meantime, foundational freedoms suffer great harm.

We are told that the 20th century was the century of totalitarianism, exemplified by the evils of communism and Nazism. The dangers of hard totalitarianism still exist in the shape of militant Islam and the alt extremists of left and right, but there is an even greater danger.

In the West, the 21st century is being ushered in on a wave of soft totalitarianism. Mainstream politicians and the establishment media are ever more ready, in the name of liberty and freedom, to bring individual freedoms under state control, thus destroying them.

Earlier this year, after three readings in the House of Commons and Senate, Bill C-16 became Canadian law. The Bill is ‘an act to amend the Canadian Human Rights Act and the Criminal Code’ by adding gender identity and gender expression to the list of prohibited grounds of discrimination.

The effect of this legislation is to put into law government-mandated speech codes with legal penalties for refusing to accept the state prescribed understanding of gender. The penalties for transgression include fines, cease-and-desist orders and imprisonment for those contumacious citizens who persist in defying the state limits on acceptable speech.

Chief amongst the Bill’s opponents has been Dr Jordan Peterson of Toronto University. Dr Peterson lectures in psychology and over the last 40 years has made a study of psychology in relation to authoritarian systems such as the USSR, Nazi Germany, Castro’s Cuba and Maoist China.

At a hearing called by the Canadian Senate, Dr Peterson warned of the dangers of Bill C-16, ‘It’s unbelievably dangerous for us to move towards representing a social constructionist view of identity in our legal system’.

There are a multitude of possible personal pronouns such as the University of Milwaukee approved ‘zim’, ‘em’, ‘ter’, or whatever jumble of letters the individual dreams up. By making it compulsory to refer to a person by such Dr Peterson argued the Bill could destroy that which it ostensibly seeks to protect, tolerance and liberty.

Dr Peterson said, ‘Freedom of Speech is not just another principle; it’s the mechanism by which we keep our psyches and societies organised and we have to be unbelievably careful about infringing upon that, because we are infringing upon the very thing that keeps Chaos and Order balanced.’ Unfortunately, the Canadian Senate is more interested in non-binary gender fluidity than they are in the concept of free speech and a stable society.

Since then Dr Peterson has received two cease-and-desist orders from the University of Toronto attempting to gag him. He may also face prosecution under Bill C-16 for ‘harassment’ for refusing to refer to students by their ‘self-identified name and proper personal pronoun’.

D Jared Brown, a commercial litigator who also spoke to the Standing Senate Committee on Legal and Constitutional affairs, penetrated to the heart of the matter. He argued that the hidden intent of the law was to seek to injure those who refused to adhere to state-mandated norms. His fear is that this will set a precedent for future legislation where ‘government-mandated speech’ is concerned.

In the Canadian province of Ontario, ‘male’ and ‘female’ have already been removed from health cards so as to allow inclusion of newly created terms. Binary ‘gender’ terms are being denied so that the individual’s biological sex can be reinterpreted as something fluid and unconstrained by his or her actual created being.

Language manipulation matters, as demonstrated by the abandonment of the term ‘homosexual’. Initially it was replaced by ‘gay’ which is now gradually being abandoned in favour of ‘queer’, and a confusing variety of acronyms.

‘Homosexual’ implies there is a heterosexual norm as the underlying stable structure for human sexuality and marriage.

Stable social structures are anathema to intolerant progressives. The foundations of Western culture have to be swept away in order to be replaced by a progressive utopia, and language is a potent weapon.

Canada is not alone in having such laws. In New York, there is a similar gender law where people and/or their place of business can be fined up to $250,000 for using incorrect pronouns. If you lived in a rented apartment, your landlord would be forced to evict you if you misgendered a fellow tenant. Given time and the inevitable transatlantic cultural flow, this destructive ideological intolerance will wash up on British shores.

Not long ago such legislation would have been rejected as Orwellian. Today, Nineteen Eighty-Four is not a prophecy of a dystopian future but is gradually becoming a disturbing reality.

Under Ingsoc, the State controlled every aspect of the individual’s life. One of the most potent tools in the armoury of the totalitarian government of Oceania was Newspeak. This enforced language with its diminished vocabulary was designed to limit the freedom of the individual and preserve the power of the State.

The real is suppressed in favour of an illusion. In The Parable of the Madman, Nietzsche has the madman ask, ‘Who gave us the sponge to wipe away the entire horizon? What were we doing when we unchained this earth from its sun?

Whither is it moving now? Whither are we moving? Away from all suns? Are we not plunging continually?’

The answer is that we took it ourselves and yes, we are plunging, and those who question it are being increasingly considered ‘phobic’.