NewsPaperthe art of publishing
Home News Did the Tories throw the Brecon by-election?
0

Did the Tories throw the Brecon by-election? 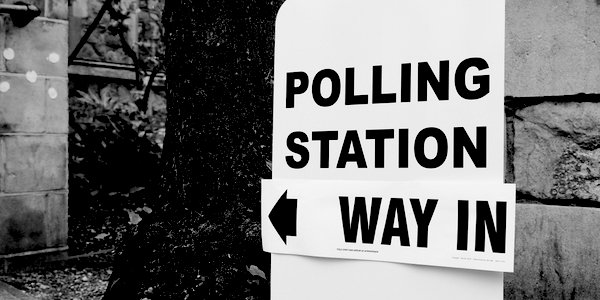 HOW to sum up the ‘Conservative’ Party’s reaction to the by-election loss of the Brecon and Radnorshire seat, which reduces their already wafer-thin majority in the House of Commons to near-invisibility? Well, consider this communique from Party HQ:

‘We just can’t work out why 3,331 people would have voted for the Brexit Party. We didn’t leave the EU on 29 March, despite Theresa May, when Prime Minister, promising no fewer than 108 times that we would, and we chose as our candidate the very same MP who was formally recalled after being convicted of expenses fraud. It’s a complete mystery.’

This is, of course, a parody. But not by much.

From the early hours of last Friday when the result was declared, the Tories’ reaction to losing the by-election was to blame anyone but themselves, and recoil in complacent horror at the mere suggestion that an electoral pact with the Brexit Party might be needed, not only to deliver Brexit and prevent the advent of PM Jeremy Corbyn, but even to survive as a credible electoral force.

‘If you vote for the Brexit Party, you make Brexit harder,’ intoned new Tory chairman James Cleverly on Sky News’s Sunrise programme. ‘A constituency which backs leaving the EU now has an anti-Brexit MP.’

Curiously, the likelihood that if you select as candidate for a by-election the very same Tory ex-MP, Chris Davies, whose conviction for expenses fraud led to the Recall Petition which triggered that by-election, you make voting for the Conservatives much harder, appeared not to have occurred to him.

Even normally staunch Conservative commentators were, to say the least, unimpressed. It’s impossible to avoid the conclusion that re-selecting a convicted fraudster was a considerable error of judgement, said Adrian Hilton, wondering why swindling the taxpayer wasn’t sufficient grounds for excluding the candidate from the Approved List.

Given that CCHQ has total control over candidate selection in by-elections, it's impossible to avoid the conclusion that re-selecting a convicted fraudster for this seat was a considerable error of judgment. The expenses scandal still reverberates. You reap what you sow. https://t.co/o4VdILmQAb

Others were quick to point out that the re-selection of Davies to fight the seat would have taken place under the regime of Brandon Lewis as party chairman and Prime Minister Theresa May as party leader, who presumably could have vetoed it, but didn’t.

It’s worth recalling some of the other takeaways from the result, not always given prominence by the media, for whom tittle-tattle about who’ll be up and who’ll be down in the Westminster bear-pit is always preferable to more forensic analysis. 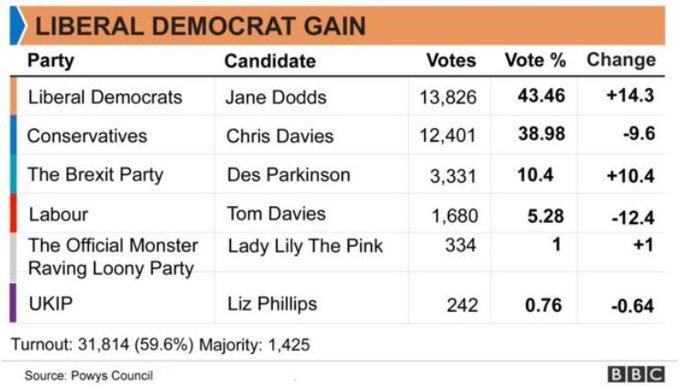 Despite an alliance with the Greens and Plaid Cymru, who stood down, the LibDems still only scraped it. With a fraud-free candidate, and more campaigning effort – in his dispatch from the front line, Paddy Benham-Crosswell of this parish referred to the Conservatives being ‘deafeningly silent’ – the Tories might even have retained the seat.

A point that was also noted by Brexit Party MEP Martin Daubeney. It’s important to remember, said Daubeney, that the LibDems had in effect been throwing the kitchen sink at the seat, resources-wise, ever since Davies was convicted, while the Tories in effect gave them a green light by re-selecting him.

#BreconByelection some thoughts: smart money was on a Lib Dem win. They’ve targeted the seat for two years, threw the kitchen sink at it and scored a good win. For the @brexitparty_uk it was our 400th target seat from 650. So did we split the vote? >> pic.twitter.com/MXqDo1GEEp

For Labour, the result was little short of a disaster. Its vote, against a convicted Tory MP re-standing, was down 13 per cent, and it garnered just 0.3 per cent more votes than the 5 per cent threshold below which it would have lost its deposit. It was the party’s worst result in that constituency in its history. And in Left-leaning Wales, of all places.

The greatest focus, however, not unnaturally, came on the relative performances of the Tories and the Brexit Party, and the need for and likelihood of an electoral pact between them, immediately dismissed out of hand both by the Tory party hierarchy and Boris Johnson himself.

But a Leave alliance would have won the seat. And as John O’Sullivan, former Number Ten adviser under PM Margaret Thatcher, has noted, there could be several hundred more Conservative Party reverses like this if the Tories under Boris repeat their betrayal of Brexit under May.

The lesson of Brecon and Radnorshire, asserted O’Sullivan, is that the Tories can’t win, and may not even survive, unless they deliver Brexit, or failing that join with the Farage Irregulars to do so.

The Brecon by-election was ‘a screeching wake up call that, even with Boris, the Tories can’t win a GE without a Brexit Party pact’, said the Daily Telegraph’s Sherelle Jacobs.

Even Conservative Party activists recognised this. Long-time supporter and campaigner Molly Giles said that the Tories must overcome their innate arrogance and snobbery towards competitor parties and reach a tactical voting deal with the Brexit Party if they really do want to deliver a clean Brexit.

The most savage criticism came in a searing polemic from Reaction’s Gerald Warner. The Conservative Party, blinded by entitlement, he insisted, is now comprehensively dysfunctional. In a full broadside, he condemned the Tories for their arrogance, snobbery and complacency in still covertly pursuing a soft Brexit, while refusing to consider even local electoral pacts with the Brexit Party.

He has a point. It’s difficult to avoid the conclusion that the Conservative Party hierarchy resemble nothing so much as first class passengers on the Titanic who’d rather go down with the ship than be seen in the same lifeboat as those awful third class passengers.

He has a point, too, on the accusation of a soft-Brexit being covertly pursued. Just in the past week, we have seen Boris float the idea of a further two years in the Customs Union and Single Market, while Brexit Secretary Stephen Barclay recounted his talks with the EU’s Guy Verhofstadt on an ‘agreement we can get through Parliament’. That points to May’s (non)-‘Withdrawal’ Agreement, less the Northern Ireland backstop, re-branded.

So this is where I stick my neck out. In a tweet as long ago as 5 July, I ventured the suggestion that the Tories were preparing to sabotage the Brecon by-election. It wasn’t hard, I speculated, to deduce what might be going on. By re-selecting its own disgraced MP to contest the seat, was the mainly-Remain ‘Conservative’ Party hierarchy deliberately throwing the Brecon & Radnorshire by-election, knowing that the loss of the seat would further reduce its Commons majority and thus impede Brexit even more?

Was it possible that the already-resigned and on-her-way-out Theresa May, still hankering for her Remain-Lite BRINO, wanted to make delivering a proper Brexit as difficult as possible for (probably) PM Boris, acquiesced in re-selecting the disgraced Tory candidate and thus handing the seat to the unashamedly Stop-Brexit Liberal Democrats, reducing its Commons majority by one more?

Let’s face it, the party’s conduct of the election doesn’t look as though they were trying especially hard to retain it . . .