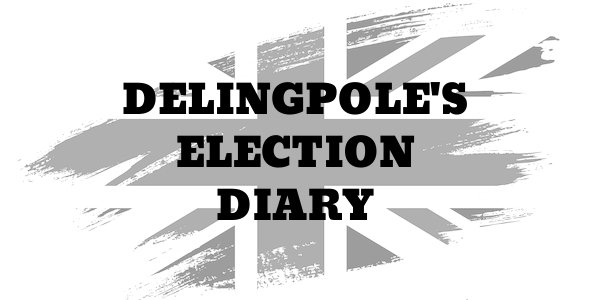 This is the first of a regular series of exclusive Friday dispatches for TCW leading up the election.

I HATE general elections – no real news, every politician drearily on-message, endless cant and virtue-signalling and scrabbling for petty advantage – but this one is exceeding my worst expectations.

By rights it should have been the best in eons: that final, epic confrontation between good and evil for which we’ve been waiting all our lives. In one corner, an opposition so comically villainous they should all wear black hats and capes: anti-Semitic, terrorist-supporting, Chavez-worshipping, far-Left loons who would transform our country into a place where it’s always winter but never Christmas; in the other, the forces of light – free speech, free markets, boundless optimism – led by our very own Aslan. But it hasn’t quite worked out that way, has it?

Some of it is the fault of our increasingly useless mainstream media, which still takes its cue from the shamelessly Left-liberal-biased BBC. In what rational, proportionate universe would the week’s biggest election story be ‘Conservative MP caught admitting on radio that if the fire brigade had told him to stay put in a burning tower block he would have ignored them and tried to escape’? This says more about the BBC’s warped news values – and its determination to ascribe to bad faith anything anyone on the conservative side of the argument says or does – than it does about the Tories or Jacob Rees-Mogg or his unfortunate wing-man Andrew Bridgen.

But for me, the far bigger villains are the Tories themselves. I hate to say this because I’ve long considered myself a natural Conservative –admittedly on the Thatcherite wing of the party, rather than the Burkean one. And this, I’d hoped, would be the election that finally cleared away three decades of accumulated deadwood from the Major, Cameron and May eras, and restored both party and country to a semblance of its past greatness.

Boris has so much going for him: charisma, hinterland, optimism, a quick brain, wit, charm, likeability, stonking prose style, doesn’t take himself too seriously, a Churchillian sense of destiny. The parliamentary party is abundant with talent: Priti Patel, Liz Truss, Steve Baker, Govey (when he’s not talking about the environment), the Moggster, etc. And it does give me a wicked thrill to think they’ve actually got the mastermind of Brexit, Dominic Cummings, lurking behind the scenes plotting (I hope) the total destruction of the Deep State. (Every day, I light a candle to him, inside one of the skulls I’ve arranged in the Dom Cummings shrine in my cellar).

So why, given all that burgeoning promise, am I so disappointed with them? Well, I could be completely wrong – or blinded by my hopeless idealism – but it seems to me that this notionally-now-pro-Brexit party has failed to learn the lessons of Brexit.

Brexit was really only partly about membership of the European Union. Mainly, it was a revolt of the masses against the post-war Social Democratic ‘consensus’ (the liberal elite stitch-up, if you prefer). It was a heartfelt cry for radical change. Instead what we’re being offered is mostly tinkering at the margins and a commitment to spending still more taxpayers’ money expanding that overweening, inefficient, nannying state which we Brexiteers had been rather hoping to diminish.

This ought to have been a once-in-several-generations opportunity for the Conservatives to take a bold, calculated gamble and press the reset button on British politics; to shift the Overton Window in a determinedly free market, small government, low tax direction. Instead, they’re alienating their natural allies in the Brexit Party by treating them as a bigger menace than Corbyn; they’re parachuting Cameron-era squishes and Bright-Blue-style Conservatives-in-name-only into safe seats; and by uncritically endorsing all manner of Left-liberal shibboleths – the green religion, the sainted NHS – they are making intelligent reformatory measures much harder to implement if and when they win the election with a working majority.

I want the Tories to win. But I don’t think they’ve made the case for why they deserve to win. Even the Brexit they are insisting on promoting is an enfeebled version of the ideal we voted for in the referendum. ‘Vote for us because we’re led by a jolly, likeable cove and face it, if Corbyn gets in it will be frightful and you won’t get Brexit!’ works, just about, at a push. But it’s not exactly a compelling vision of sunlit uplands, is it?