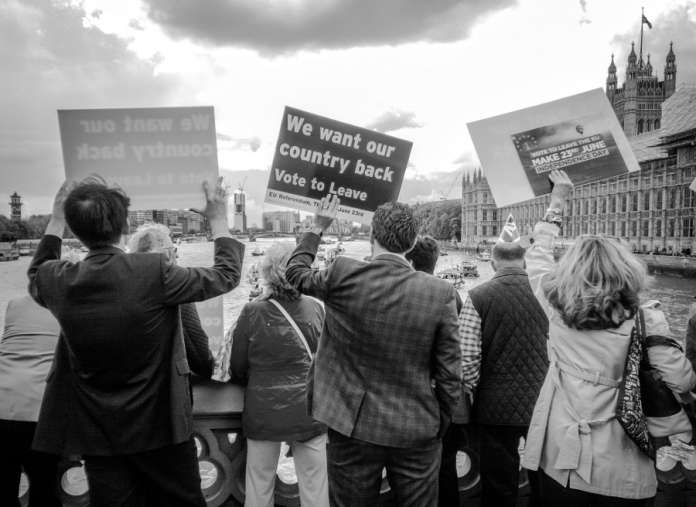 Not for the first time, the mainstream media has written off Ukip as irrelevant, taking turns to ignore the party or to sling mud at it. Although there is a very interesting leadership contest taking place, there is virtually no media interest in it. This is the party that won over 12 per cent of the vote in the 2015 General Election and won Brexit for Britain in 2016.

Today the party is barely mentioned in the media. When it is, a false friendliness barely conceals the ‘schadenfreude’ at Ukip’s 2017 election disappointment: “Hey ‘Kippers, you were successful in winning the Brexit referendum” – a sentence that BBC journalists must say with as much pleasure as if they were chewing glass – “but the Tories are going to deliver. So why don’t you just pack up and go home? Be happy: you’ve done your job, but leave it to Theresa May and her team to negotiate a good Brexit deal for Britain.”

Anyone who knows anyone in Ukip will know that this is like a red rag to a bull. Not least because it looks increasingly likely that Brexit will be betrayed while the biased BBC salivates at every piece of bad or fake news that suits their globalist agenda to keep Britain in the EU.

Kippers have never trusted Mrs May to deliver Brexit – she was, after all, a Remainer in the referendum campaign. She might talk a good talk, but her record as Home Secretary on immigration and policing was dismal. With every week that goes past, another small concession is made to erode the full, clean, swift Brexit the country voted for.

When she was Home Secretary, Theresa May consistently promised and pledged to bring net migration down to the tens of thousands, an aim she never got even close to delivering. She left immigration from outside the EU, which the Government can control, at the record high annual level of nearly 180,000, much higher than it should be due to sham marriages, family reunions and students overstaying their visas.

Britain needs to be able to control immigration from the EU so that the only EU citizens given a visa to work are professionals in shortage industries. If we could do this, net immigration would very soon sort itself out. But the continued flood of unskilled labour to Britain – often of ‘cash in hand’ workers – undermines wages of local British people, especially young people who find it increasingly hard to find an honest job. Even Bank of England chairman Mark Carney has said as much.

We must also become self-sufficient in skills, but this will never happen while there is unfair competition from cheap labour. Businesses are disincentivised from training local 16-year-olds when they can hire a ready-trained and more mature 25 year-old from eastern or southern Europe for less money.

All this perpetuates a vicious circle in which we do not train enough doctors, nurses, engineers and construction workers for example, which in turn reinforces our dependence on immigrants to fill the gaps that would not be there but for our failure to train our own young people with the skills they need to make a good living for themselves.

Home Secretary Amber Rudd’s latest plans last week offer no respite to the continuing demise of prospects for British workers and young people. By keeping the door open to more rapid, mass immigration for a ‘transition period’ of at least 2 years, which could be extended at will, the British people are being betrayed.

One of Theresa May’s failings is complacency. She was complacent in her election campaign and expected to win. She has become complacent yet again and believes that she can barter away the will of the British people. But she seriously underestimates the strength of feeling about immigration. Nor does she appear to have any concept of the negative impact of immigration on ordinary working people – it is not something she sees in her lovely Inner London and Westminster bubble where the only experience of immigration is one that suits the elite.

As well as the Government backtracking on taking back control of our borders and controlling immigration, it is not even talking about making the UK self-sufficient in skills as Ukip is. Its recent conversion to the religion of barking madness in embracing the maddest parts of genderqueer theory and forcing such confusing ideas on primary schools means that a new and fertile territory of reasonable concerns has opened up for Ukip to represent.

Ukip has had a difficult six months. The Stoke-on-Trent Central by-election did not deliver the hoped for victory, and this led on to poor results in the May local elections and the general election in June.

Yet, in today’s febrile political climate, fortunes can turn around in an instant. A party that was written off one minute can bounce back with stunning vigour the next – witness what happened to both Labour and the DUP in the general election. In the 2014 European elections, no one should forget that Ukip were the first party apart from the Tories or Labour in over 100 years to win an election. That was only three years ago, and it could well bounce back to that winning form again given the right conditions.

The party is currently in the middle of the third leadership contest in a year. This is not what anyone wanted, but it may just be the most fortuitous of timings. Attention is bound to turn to Ukip again at its party conference in September when the new leader is announced.

Ukip is the only party of full Brexit. If the Tories betray the nation, there will surely be another general election, and Ukip will be there once more to step into the breach and make Brexit happen.

Yes, the party needs to professionalise internally – it can and it will – and start to shout about their other policies – policies so good in fact that the Conservatives and even Labour adopted many of them for their own manifestos.

The last general election was billed as a two-horse race, but it was all about Brexit. Millions of people held their noses and voted for a party they didn’t really want to vote for in order to keep out someone they genuinely loathed.

If Ukip play its cards right, millions who voted or considered voting for them before may return. The next few months could be a new beginning.