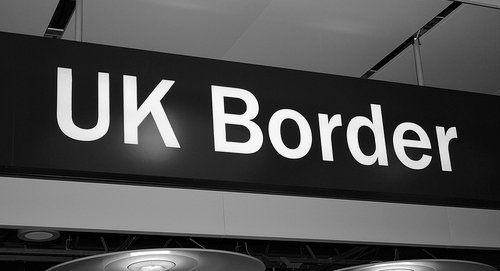 The BBC’s blizzard of election-related stories that spin immigration as a topic that doesn’t matter is impossible to track. Lift almost any stone and there’s another example.

A Newsnight feature last Thursday was billed by presenter Emily Maitlis as ‘a long hard look at the subject’.  The full transcript can be read here.

This, it transpired, was a special piece of BBCspeak. It meant that Newsnight – led, of course, by former Guardian executive Ian Katz- was about to deploy its own form of spin to show in yet another way that those British plebs who support tougher immigration controls are deluded bigots and xenophobes.

The main section of the item was actually a very unequal discussion which Emily Maitlis pushed very hard to ensure was skewed to the pro-immigration side.  Self-styled shock jock John Gaunt, the main contributor who supported more controls on immigration, explains the way he was ambushed and appallingly treated in Podcast episode 24 here.

On display was the same Newsnight approach to balance as was deployed on the day that David Cameron announced his alleged desire to hold an in-out EU referendum. On that evening 18 pro-EU campaigners were pitched against Nigel Farage.

The main analysis in this blog is of the opening report by Duncan Weldon, hired by Katz as an economics pundit from the TUC.  It was actually only 670 words, or five minutes of airtime, but it was so blatantly skewed that it stands almost alone as monumental evidence of the deep bias in this arena.

Former Labour acolyte Weldon’s initial point was that immigration in London didn’t matter because ‘it was a fact’ of life; he contended that the changing demographics ‘were not a political issue’. Says who?

Maybe these things don’t matter to those at the BBC, who worship daily at the shrine of multiculturalism.  But to put it mildly, respected think-tank Migration Watch certainly do not agree that an influx of 1.5m foreign nationals over the past decade – the biggest in the capital’s history by a very long way – can be regarded as  ‘only a fact of life or is ‘not a political issue’.  MW presents compelling evidence that it has created a massive housing crisis and has driven tens of thousands of native-born Londoners away.

After this glaring bias, Weldon next contended that in order to see ‘where things had changed’ as a result of immigration, you needed to go on commuter lines out of the capital, to places such as ‘Peterborough, Stevenage, Welwyn and Hatfield’.  Bizarre, perhaps, that he referred only to a few towns on the London to Doncaster East Coast railway line, but most BBC staff inhabit only a narrow metropolitan bubble, so perhaps he is not aware that immigration issues are also hitting communities further afield as well. Places such as Rotherham, say. Or Oxford.

Next, Weldon turned to that old BBC device, the vox pop, a range of voices from members of the public.  Many years ago, when I did my basic training as a BBC reporter in what is now the Langham Hotel, I was warned that these can never be – and should never be projected as – a balanced or objective view of public opinion. They are only ever a subjective snapshot.

The sequence of three voices was gathered, selected and edited by him with all the subtlety of a jackhammer to show that those with views against immigration are bigoted xenophobes for no other reason that they hate foreign languages and shops selling foreign goods. On the other hand, his pro-immigration contributor made a reasoned response, making the point that immigrants are ‘different brains from different parts of the world’, who set up new businesses and who have a wide range of skills.

Weldon then said that if this selection of ‘public opinion’ (which this most certainly was not) was ‘nuanced’, the view of business was ‘fairly’ clear’. His source here was Katja Hall, the deputy Director General of the CBI, who a search on Google reveals is the leading mouthpiece for a totally uncontrolled flow of foreign labour into the country. And blow me down with a feather – she is also a former BBC employee who was responsible for ‘change management’. What better credentials could a supporter of uncontrolled immigration (and, of course, according to her CV, ‘gender equality’) have? And what better an objective source for a Newsnight quote?

Finally, Weldon delivered his own verdict on the immigration debate and evidence. This was , supposedly ‘neutral’ but was actually more of the same;  it was a treatise that could have been written by any member of the TUC, the Labour Party or, for that matter, the SNP.

There is only one explanation:  a common mindset and a common set of rules are at work. This  one-sided approach emanates directly from the Bridcut report, a Gormenghast-style recalibration of the rules of reporting that was deliberately engineered by the Trustees to allow the BBC’s own agendas to be followed on topics such as immigration and climate alarmism.

The same applies to stories about the EU. During the election campaign, when a has-been political leader whines that Brexit would be damaging, it’s automatically elevated to headline status.

Conversely, when the leader of the only party advocating withdrawal is interviewed, his views about the same subject are not even on the agenda. Instead, Evan Davis works hard to pin a new label on him as a ‘hater’ of that nice Paddington Bear’s version of multiculturalism.

You could not make it up.

Share
Facebook
Twitter
Pinterest
WhatsApp
Previous articleKathy Gyngell: Sexodus anger needs to be channelled before it explodes
Next articleNick Wood’s Campaign Commentary: Ten days to save our country. Can Dave find the passion to get the message across?