Dale Winton: Donald Trump – is he hero or villain? 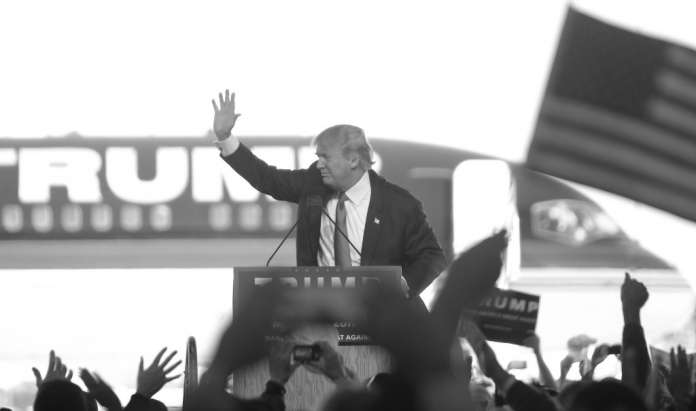 This is my coming out article. I confess I’ve been a closet fan of American politics for the past six years. I went from fan to obsessive acolyte at the second national televised debate between Obama and Romney. I watched in awe as Romney found his voice and all but secured the keys to the White House.

By the third and final debate it was Romney’s to lose……and he did. It was an unexpected epic fail. I was devastated and by election night I needed alcohol to get me through the process, as my worst fears were realised. That was 2012 and I’ve counted the days until the next wave of primaries in the hope that the world would survive by a thread until America voted in a new leader of the free world. The days and nights were long as horror upon horror was inflicted upon an unexpected world. It seemed that no one was doing anything about it.

Finally, it was election year and the pretenders to the throne threw their hats in the ring. An awaiting American public would finally be able to cast their votes at a collection of senators, governors and the odd couple of Washington outsiders. Many more than I wanted to consider, but nonetheless let’s hear them out and see who’s who. That was just the Republican candidates!

For the Democrats it was Hillary and a couple of seemingly nonevent contenders merely there to chivvy along the coronation of “Now it’s my turn Hillary”….or at least, that’s what we thought. From out of nowhere an old socialist curmudgeon sent her veering to the left and the FBI set about measuring her up for a free orange pant suit. She could soon be headed for the ‘big house’ and not the ‘White House’.

One morning I turned on my TV to hear that Donald Trump was going to announce his entrance into the Republican race! All major networks promised to cover the event. So I turned off my mobile, made a pot of coffee and laid out a few snacks to enjoy as I waited to watch this bizarre idea of Trump running for president. Little did I realise that I was about to witness the opening ceremony to the greatest show on earth. When Trump descended the electric staircase orange, coiffed and above all incredibly confident; my jaw hit the floor.

As one who has spent his entire professional life being ridiculed for my “fluorescent tanned” complexion, I felt compassion for the man before he even uttered a single word. However, by the time he was three minutes into his speech, I’d put the foot rest down on my recliner and was sitting bolt upright hanging onto his every word. The distraction of his strange lacquered bouffant seemed…well, less of an issue!

From a TV technical point of view, I idolise his lighting man. He must travel everywhere with him. I’ve never ever seen him lit badly…..before, now or ever in HD. My personal bete noire has always been chronic TV studio lighting! I marvel at the way American networks beautifully light their studios and artists.

When his announcement was finally over, I was exhausted. As it was, I was still emotionally stretched after a particularly traumatic episode of The Kardashians from the night before! Maybe it was because I genuinely hadn’t expected such a no-holds-barred delivery. It felt like the man had reached through the TV screen and grabbed me by the scruff of the neck. I defy anyone watching on that morning to look away until he was done. Talk about car crash TV.

The point is I couldn’t look away for fear of missing an even more outrageous statement. Powerful stuff. I was truly offended at times and yet there were moments when he made total sense. I was insulted at times and then again reassured by other statements. I didn’t know what to think. I needed to separate the bellicose bluster from the assailant fiscal message.

Anyway, he announced his candidacy and what followed was unbelievable. It wasn’t so much the rhetoric from the liberal Left that astounded me, but the vicious, vile and all out attack from the pro-Republican commentators. When the opinion polls came in after his speech, the world was stunned. Trump was a hit. He knocked it out of the park! Even then, it was suggested by many that it was just a publicity stunt. If not that, then could he be angling for a prestigious position like ambassador in a safe sunny clime?

No matter the reason, it looked like a lot of high profile talking heads were in complete denial of Trump’s tsunami of support from the hitherto ‘silent’ majority. Privately, I suspect even Trump himself must have been amazed at the size of his following. I do understand that he regularly made some completely inappropriate comments and at times was just plain wrong. With every single incendiary volley he threw out there, his popularity shot up. In a normal primary cycle, any one of those comments would have been catastrophic. However, he survived and his numbers went through the roof.

It was at this time that his conservative detractors would turn up on any TV show to try to bring him down. They actually looked beyond angry and at times bitter, smug and arrogant. They couldn’t hide their fury at Trump’s growing movement.

Personally, I was disappointed at their display. I’d always respected, admired and understood their point of view. The one beacon of light was Charles Krauthammer, the elegant king of political commentators who offered a constant fair and balanced overview. He was pragmatic throughout. He clearly didn’t like Trump too much, but as my go to guy for political opinion and consideration, he’s just about the best truly objective opinion you’ll get.

It’s been a very long four years, but thanks to Charles Krauthammer, along with Greg Gutfeld, Harris Faulkner, Pat Buchanan, Juan Williams and Brit Hume, my sanity prevailed. Without them, I think I’d have lost my mind. Either that or I may have been forced to take an axe to my TV and resorted to Andy Williams and Dusty Springfield as my only aural influence. I really do take my American politics that seriously. There were times when even hallucinogens seemed an option, but I’m too old and not brave enough for any of that nonsense!

I could of course go on forever about the endless spats that have taken place as Trump has seen off his opponents, but it does beg the question, Why do I listen and fully understand his unstoppable grip on the electorate? Is it helped by the knowledge that sooner or later each and every one of the other candidates alienated me one by one? Is it because not one of them would be a match against Hillary in a general election? I wouldn’t mind, but I don’t believe she’s even a strong and persuasive candidate.

Is it because I’m a superficial guy who laps up bite size bulletin points administered through my TV by a self-funding billionaire and former reality star? For sure he’s unruly, coarse and extreme, but he’s got a rare quality for someone in politics. He is truly authentic. Is it because he cares and he’s supported by a wonderful family including two ex-wives?

The fact that they all get along so well takes some doing in itself!

Maybe it’s because I’m a quiz show host and I’m watching the ultimate game show? The contestants from both parties are fighting to the bitter end in the hope of winning four to eight years in the White House?

To get to the final round, here are your subjects; Health Care, The Iran Nuclear Deal, Immigration, The Economy, Jobs and Foreign Policy. The list goes on, but that’s not the only reason he’s In It To Win It. His attack on political correctness is reason enough, but that’s still not it. I’ll tell you why. He’s fearless and he promises to make his followers safe and prosperous. He loves his country and he’ll do his best to protect it from anyone who threatens its constitution.

He’s also recognised that the liberal Left and political correctness have bullied us into silence. And there’s the rub. You cannot bully Trump and at the same time, he’s got your back. That’s a safe feeling for the millions of his followers who feel ignored by both parties. They’ve had enough of the Washington two-step performed by the politicians they’ve put in power.

I started this article by asking, “Trump: Hero or Villain?” I’ve never met Donald Trump, so I have no personal insight into his character. There are many who have met him and benefitted from his acts of generosity and compassion. Those in need are many and they’re well documented. At the same time, his words have also given reason for many to feel hurt and threatened.

I reserve judgement on the answer to my question. How he steers his campaign from this moment on is going to be fascinating. He’s polarised an entire nation and whatever the outcome, as the saying goes, “you can’t please all of the people all of the time”. If anyone can come a little closer to disproving those words, it’s Mr Donald Trump. Well maybe not all of the people, but enough of them to matter.

Dale Winton is a television presenter, broadcaster and writer.