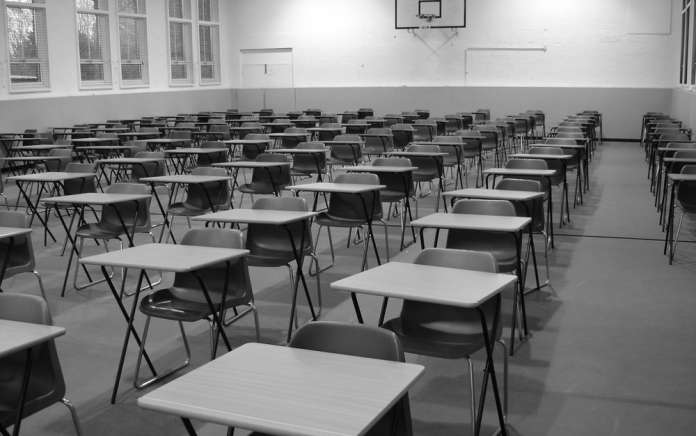 There are several ways in which one can ensure good public examination results. Probably, it can most easily be achieved by dumbing down both syllabus content and the exam papers themselves. Alongside the inclusion of coursework assignments that may be completed in part by a parent or teacher, it more or less guarantees success. Sadly, for the educational establishment, the Blob, this approach has been rumbled.

An alternative strategy, the one now being phased in, is to toughen the syllabus and the testing but to manipulate the grade boundaries so that the inflated grades of the previous system are preserved. The government and the exam watchdog, Ofqual, are proudly asserting the justice, honesty and integrity of this way forward.

A third approach has recently hit the headlines even though it has been around for a very long time. This method is the simplest of all, and it is the highest achieving schools that are most likely to deploy it. All it takes is for a few teachers in a school to become examiners and, using their ‘insider’ knowledge, to pass on to their pupils, however indirectly or well-disguised, hints about the syllabus topics and/or exam questions that will come up. The youngsters are unlikely to be aware that the excellent revision schedule they were given was based on more than their teacher’s guesswork.

Eton and Winchester have been caught out this time around, but it is common for good schools in both the maintained and in the independent sectors to have teachers who also work as examiners. Even the comparatively humble ‘markers’, who do not usually see questions in advance, can gain informal insights into what syllabus topics are likely to come up in any particular year. Anyone who thinks that most teachers mark to make money is fooling himself. Payment is pitifully low. The rewards come from the insider knowledge to help your pupils.

It does not take a genius to work out that if a teacher knows what is on the exam paper, there is a strong possibility that he will steer his pupils’ revision towards certain topics and away from others. Is it realistic to expect all teacher-examiners to display appropriate honesty and integrity? How many history teacher-examiners, for example, will urge their pupils to revise World War I when they know that the only war question on a paper deals with World War II? Can we expect a physics teacher-examiner to give equal time and effort to revising both gravity and nuclear fission when he knows which one will appear on the exam paper this year?

A way forward would be to prohibit examiners from teaching an exam which they are involved in setting. Why is this not already the case? Part of the problem is that the exam boards are competing for custom, and anything that makes an exam easier is likely to pull in more punters. Allowing teachers ‘insider’ knowledge via the role of examiner, or even marker, is part of the exam boards’ incentive scheme for persuading schools to choose them.

In effect, the boards operate a cartel which is against the public interest. They all offer, to a large extent, the same product – GCSE and A-Level – and, backed by the Department for Education, refuse to offer alternatives in this country. They compete only to be easier and more accommodating. Small wonder, then, that the academic challenge set by public exams has been diluted over recent decades as the pass rate has gone up. The current exam reforms are the government’s desperate attempt to salvage something from the wreck.

For the overseas market, such as Singapore, the more rigorous GCE O-Level is available and is taken by most pupils. How extraordinary that we continue to sell that gold standard grammar school exam to our economic rivals, but have withdrawn it here to protect the GCSE from competition and to sustain our version of a comprehensive school system.