NewsPaperthe art of publishing
Home News Bruce Anderson: Why are the Tories not ten points ahead?
2

Bruce Anderson: Why are the Tories not ten points ahead? 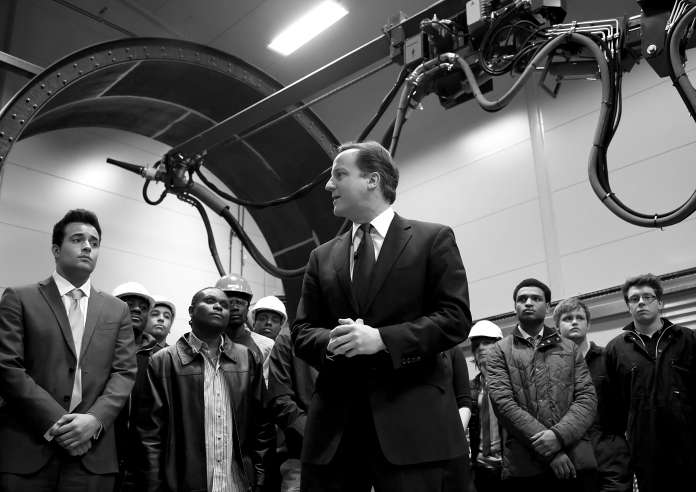 This was first published on CapX. CapX is a new service set up by the Centre for Policy Studies to make the case for popular capitalism. It commissions leading writers and thinkers, and aggregates the best content on innovation, enterprise and trade from around the world.

With nine days to go, the British election looks wide open, which is very strange. If the voters are asked who would make the better leader in a dangerous world, David Cameron wins easily. If they are asked which party would be better for their families’ prosperity, the Tories have a comfortable lead. Moreover, even in embattled circumstances, this government has tackled two chronic problems which even Lady Thatcher side-stepped: welfare and education. Our welfare system encourages able-bodied youngsters to subside into a life of idleness. All too often, our education system renders them unfit for anything except idleness. The Cameron reforms, as much cultural as legislative, are vital investments in national prosperity and human happiness. So why are the Tories not ten points ahead?

Every Tory supporter has his own answer. The campaign strategy is much criticised. But there are more basic questions. In order to explain the Tories’ current position, we have to address both the chronic weakness of British political science and long-term political demography.

The 1964 British Election campaign was not the best argument for the virtues of democracy. Harold Wilson was a fraudulent, meretricious creature. Yet he was the heavy-weight champion of British politics. Alec Douglas-Home, the Tory Prime Minister, was a tough and honourable man who not only had a good brain, but unlike Wilson, a lucid one. Yet he was widely derided as an old-fashioned bumbler and could hardly get a hearing in fashionable circles. Even so, Sir Alec won 43.9 percent of the votes.

Since 1964, important changes in British society have moved in the Tories’ favour. Home ownership: substantially up. Trade Union membership, significantly down. Middle-class self identification, well up. Working-class self identification, well down, White collar occupations, a steadily growing proportion. Manual labour, in steady decline. Yet the Tories have only twice exceeded Sir Alec’s losing percentage: in 1970, Ted Heath, and in 1979, Margaret Thatcher’s first victory – and then by only half a percent (Unionist votes in Ulster made a difference, but only a marginal one). On the basis of 1964 sociology, the Tories should have been heading for sixty percent, not struggling to reach forty.

The unpopularity of the Tories is much the most interesting question in British politics. It has been neglected because those who purport to study politics in the Universities are usually lefties, preoccupied with the working-class’s inexplicable failure to embrace its socialist destiny.

Immigration and the growth of the public sector are part of the story. Despite recent efforts, the Tories have not always found it easy to win over those voters. But there are more fundamental problems: the breakdown of deference, the breakdown of religion, the breakdown of the family and the breakdown of puritanism. Sixty years ago, Britain was a far more ordered society and the mass of the population had far fewer expectations. But if they were in the middle classes, they had a good chance of realising those limited ambitions. A black coat and a white collar were a guarantee of social status, a clerical job was a job for life, a marriage was also a life-long contact. Left-wing intellectuals and the ‘angry young men’ playwrights and novelists of the 1950s may have found all of that intolerably stultifying, but it did mean social stability.

Over the past fifty years, that has all broken down. For a minority, this has been liberating: vastly more opportunities and excitements. For the majority, the growth of instability has merely meant greater opportunities for unhappiness. Globalisation: for the minority, this has offered the chance to work abroad and travel to exotic locations. For much of the lower-middle class, it has meant insecurity. There are no longer jobs for life.

There is also the continual tension. TV and the glossy supplements constantly make everyone aware of the possibilities life could offer. Very few people would ever be inhibited by puritanism from trying to enjoy them. So there is the painful contrast between a limited, unfulfilled existence, a dull job, marital strains, never enough money – and the contemporary definition of the good life. It owes nothing to philosophy or religion: everything to hedonism and consumerism. How many people today would find consolation for their straitened earthly circumstances in the Beatitudes: the future Blessings of the Kingdom of Heaven?

This marks a profound difference between England and the US. To the fury of rich Liberals in Hollywood, some of the least well-off people in the States resolutely refuse to vote Democrat. They do read the Bible; they do believe in the resurrection, which gives them the moral stamina to cope with adversity. In the culture wars, they are on the Conservative side. There are no culture wars in Britain, because the right has surrendered.

This might seem far removed from electoral politics: not so. Where there are no offsetting cultural compensations, insecurity and unhappiness breed resentment, directed at those who seem at ease with life. That means the Tory party. Despite the best efforts of the Tory modernisers, their leaders are seen as people who do not have to worry about the bills, unless they have had an especially disastrous week at Ascot, who do not have to concern themselves with the local schools and hospitals, because they would never dream of using them.

This is an especial problem for Messrs Cameron and Osborne. They cannot help it: their body language radiates enjoyment of life. That is accurate. They do enjoy themselves. They also work long, hard hours, as their fathers did before them. Yet they are seen as toffs, who do not understand life as most people live it.

The Tories have a further difficulty. For much of the Seventies and Eighties, the Labour party positioned itself to the left of electability. Then came Tony Blair, who detoxified the brand. It is not clear whether Ed Miliband approves of this: he often positions himself to the left of the Blairites. Yet even if he is a leftist, he is not sinister and is still benefiting from the Blair makeover.

That said, it is fortunate for the Tories – or at least the English ones – that the Labour leader, though not a toff, came from a well-off metropolitan background. He is not well-placed to capitalise on middle-class discontent. It is also likely that as polling-day approaches, pocket-book issues will become more important than populist resentments. But whatever the outcome, the Tories should recognise the need for hard, long-term thinking about the relationship between voting habits, social attitudes and culture. There are no easy answers.